"I have your sweet."

They're important, however, so it's nice to have them pointed out.

Hmm, I have not been introduced to "do" and "mhilseán" in the last lessons, even though I have gone through them multiple times. They were only mentioned in the lesson's description. Kinda confusing.

Why is it mh and not just m? Is it because of do? Is mhilsean a feminine noun?

It is because of do. (Milseán is a feminine noun, but both feminine and masculine nouns are lenited after both do and mo).

Is there some 'easy to remember rule' for instantly distinguishing between female and male nouns?

I know that names of rivers and countries are female; as are most nouns that once tended to pertain the feminine matters like the names of females and occupations like nurses.

That said, why OH WHY is 'cailín (a girl) masculine??? I know ! I know! It ends in ín ans, as such, it doesn't break the rules. BUT, whithout going into nouns that end in óg & eog (like bróg - shoe, ordóg - thumb; fuinneog - window; spideog - robin), is there some easier way to know whether a noun is masculine or feminine?

Please don't say, "Use a dictionary!"

Also, how would you say to somebody, "You are looking well," "Tá tú ag féachaint go maith," could fit the bill,

I had a shot at it thus, "Tá cuma maith ort," but I don't want to be accused of making up the language as I go along - God knows! There's enough at that.

Don't waste your time trying to sort nouns into categories - grammatical "gender" has nothing to do with the inherent characteristics of the thing that is being labelled with that particular word. In most cases, the gender is reflected in the spelling, so learn how to spell words, and for the most art, the spelling will tell you the gender: 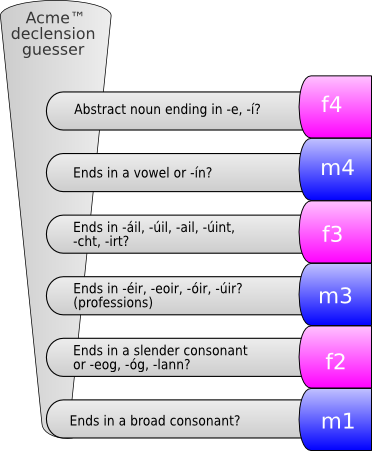 However, I have been repeatedly corrected on this site for NOT using the séimhiú after 'sa' (e.g.) when I put 'sa cuisneoir' I am told, you used the wrong word followed by the correction, 'sa chuisneoir' with the 'h' underlined. Am I missing some vital point that changes the rule?

These days, "Tá cuma na sláinte ort, is less likely to get a man into trouble than, "Tá cuma an-deas ort."

Can I just say - thanks for taking the time to help; it is very decent of you and I greatly appreciate it.

There is no single rule for the simple prepositions - when there is no definite article, "ar" lenites in some cases, doesn't in other cases, and even eclipses in a few case, "de", "do", "faoi" and "roimh" lenite, "i" eclipses.

That's all when there is no definite article. But "sa" is actually "i" with a definite article - (it's still "ins an" in some dialects), and the pattern for simple preposition with the singular definite article is different - most of them eclipses, but "i", which becomes "sa" lenites.

I think you just have to learn these - there aren't really that many, at least not compared to the gender of thousands of nouns.

Here's the thing! Why is it, Tá an cat ar an turtar," BUT, "tá sicín ar an bpláta"? "Itheann na páistí seacláid roimh an dinnéar," BUT, "Ólann Pól roimh an gcat"? What's the difference???? What point am I missing? It's driving me astray in the head!

In Munster Irish, it would be "ar an dturtar" and "roimh an ndinnéar" , but in Connacht Irish and An Caighdeán, the prepositions with "an" don't cause eclipsis of words starting with "d" and "t". (And in Ulster Irish, it's all séimhithe all the time, so the DeNtaLS DoTS rules come into play).

SatharnPHL, you are the best. Seriously helpful all the time everytime.

I have got myself into a right muddle with two of the irregular verbs DEIR and CLOIS.
I have got the notion from somewhere that the Gach Lá of deir doesn't run like the rest of them (deirim, deireann/tú/sí/sé/deirimid/deireann sibh/siad) it looks right but IS IT CORRECT? Now to CLOIS. Should you say, 'ar chuala tú é sin?' or should you say 'ar chlois tú é sin?' Would you reply, Níor chlois or Níor chuala and would you say Chuala or would you say chlois? For what it's worth - I have the impression that it should be CHUALA but NÍOR CHLOIS for the negative. Another thing! Why is Ní used in some past tense negatives and NÍOR in others? Is there a SIMPLE RULE? I'm all up in a heap with this conundrum!

The upside is that there are only 11 irregular verbs - it's not an insurmountable task to get a handle on them, but it does require a bit of effort. You have to use them to get comfortable with them, but you will get familiar with them with practice (and there's probably something to be said for old-fashioned rote learning for this type of thing - get out a notepad and write out the various tenses, and the interrogative/negative forms of a particular verb long hand, and then create some sentences that use the verb in different sentences. Maybe pick one or two verbs and do them every day for a week, and then take a break, and see if a week later you can still remember them).

But is deir in the Aimsir Laithreach different to the other 10 irregulars?

As for Céad cúrsa - "a hundred courses", an chéad chúrsa - "the first course", príomhchúrsa - "main course".

The second part of a compound word is usually lenited. I'm not sure what to make of príomh chúrsa if you encountered it as two separate words rather than as a compound word - in a compound word, príomh is essentially an adjectival prefix, if the words were separate the adjective would usually come second.

Alas! I came across it on page 117 of a National School text book called'Bun go Barr 6'. It's a menu (Biachlar) and it is exactly as I posted it. If one can't trust the school books one is rightly jiggered. My problem with abair stems from a school chart called Irish Verbs made Easy.

It "appears to me" that deir is different in that for, 'I say', we don't "appear" to use 'deirim' or for, 'you say', we don't appear to say deireann tú - we appear to just say 'deir mé/tú/sí/sé/sinn/sibh/siad' - that (if it is how it is) just wouldn't make any sense at all to me.

I know that it probably appears that I am taking the entrails out of the thing. BUT! I am an one of these people that simply can't function while I don't understand why things like that happen - I am sure there must be a simple rule; but what is it?

I see a few examples on menus online that use príomh chúrsa for "main course", but I think they're working on the assumption that two words in English have to be two words in Irish. The space is not needed.

Thanks! I appreciate your help. Though one expects school text books to be much more careful. So, Gach Lá = Deir mé/tú/sí/sé/deirimid/deir sibh/siad????? It STILL doesn't look RIGHT.

What is "do"and why does it just show up to mean have or has? We could use a little light bulb for an explanation before the lesson.

Sorry, my bad, I figured it out do=your

What is 'ta' exactly?? So irritating at times..

Irish doesn't have a verb for "have", it uses the phrasal verb tá ... ag for that purpose. Where English has "X has Y", Irish has Tá Y ag X. In this case "Y" is do mhilseán, and "X" is mé, which combines with ag to make agam.

do is used for singular "your" - talking to just one person.

bhur is for plural "your" - talking to two or more people.