I just hate it when i go to a fight and a hockey game breaks out....

Is this quarreling/fisticuffs? Or can this mean the players are facing off against each other in a game?

In the context of this sentence, I was wondering if Gaelic sports have the same tradition of fighting that is seen in North American hockey? (That is, technically penalized but tacitly encouraged because of its entertainment value.)

There are occasional clashes on the field, but they aren't tacitly encouraged, or popular with the fans or viewers. Because of the structure of the GAA and the fact that transfers between clubs are essentially impossible, it is a game of intense local rivalries, and even at the more senior levels, there can be a degree of mental and physical "softening up" of opponents that can lead to outbursts. Penalties imposed on the field that lead to suspension can be, and frequently are, appealed and overturned, and it's a big pitch with 30 players and a single referee so some players will take their chances, but for the most part, while there are "dirty" games, where playing the man rather than the ball can be a feature, actual fighting is rare enough to be newsworthy. 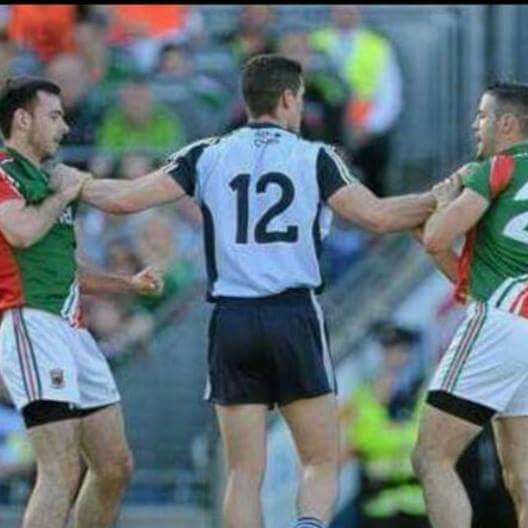 Nice picture of Dermo keeping the peace between those two lads.