Translation:An elephant is an animal.

Why isn't "An elephant is an animal" allowed?

These reports are not being checked for years T____T

Look at this horror: 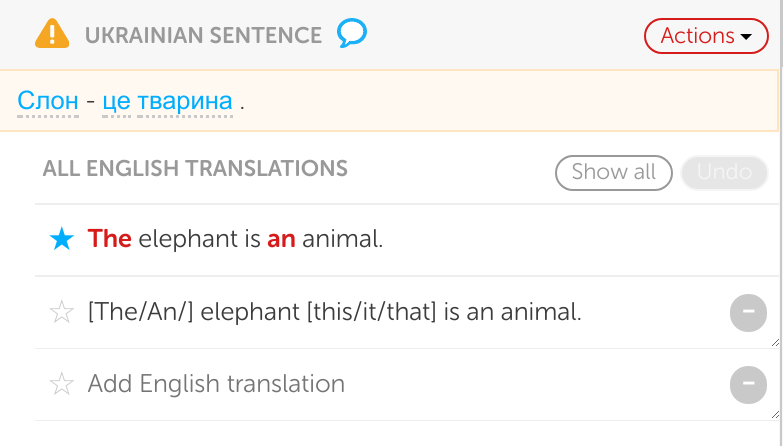 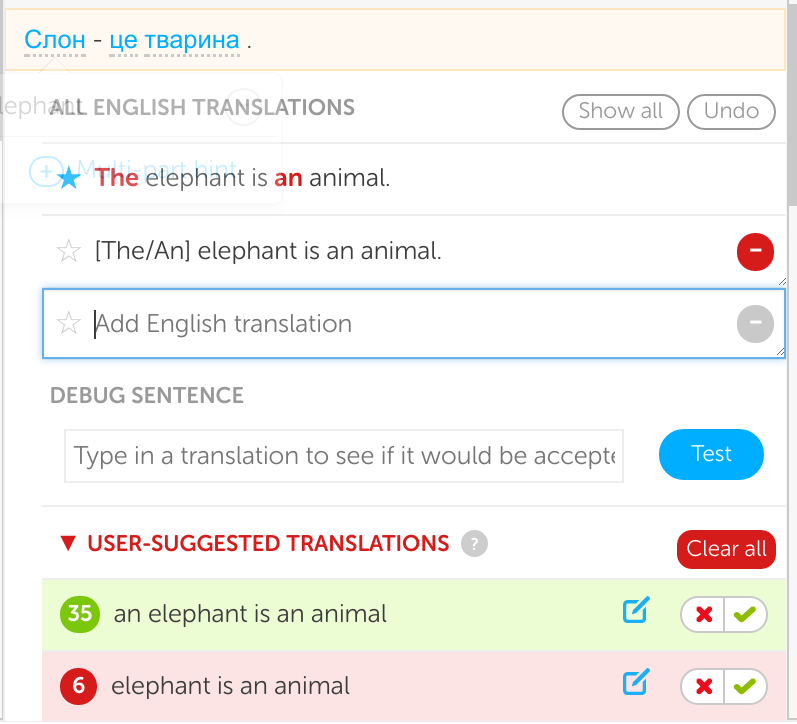 I'm totally frustrated... The reports are piling up... There are hundreds unchecked ones... If one checks them every week it won't happen...

You've been doing a great work, it doesn't matter.

It's not needed and the answer "Слон - тварина" is accepted :)

Shouldn't this be "this animal is an elephant"?

Wouldn't that be "Це тварина - слон" though? The other way round?

I believe "This animal is an elephant" would be "Ця тварина — слон." Just one letter, off, but in the sentence we're translating here "це" is basically a pronoun (like "this is ....something...") whereas "ця" is a determiner ("this elephant is...something...") for a feminine noun.

What's a pronoun doing there in the middle of the sentence? It's just a way of emphasizing the meaning that one thing is being described as one instance of a broader category. If you thought of it as "An elephant, that's an animal," you'd have the grammar right.

The same thing just happened to me...

I'm in the same boat. An elephant IS an animal ! Period!

Sorry guys. When the exercise was created somebody f*cked up and nobody checked afterwards. I don't know why more and more new sentences and sections are created before the previous ones are fixed, but this is how it's happening here in the Ukrainian Duolingo V_V

Why is 'the'? Any, not a specific elephant is an animal.

What is the dash after слон for? Is it necessary?

Yes, it is necessary. According to the rules of punctuation in Ukrainian there has to be a dash ("тире") in case there is a particle "це" before the predicate (which is "тварина" in this sentence).

There are many other cases when the dash is required. You can read about these cases here: http://pidruchniki.com/1494080740591/dokumentoznavstvo/punktuatsiya

An elephant; it's an animal. This is correct in English, is this close to the meaning in Ukrainian?

That's a valid word-by-word translation. However, I don't think the Ukrainian sentence has the same "double strength" emphasis on "elephant" that yours does. In short, the suggested translation "The [or "An"] elephant is an animal" likely does best convey the meaning and emphasis.