Duolingo and the power to alleviate the European migrant crisis

No doubt you’ve all been hearing about the migrant crisis in Europe the last couple of months. Hundreds of thousands of people are risking everything in order to move from unsurvivable conditions in their home countries, to other countries where they have a much better chance at a normal life.

Eventually, most of the migrants make their way to either Germany or Sweden. As both have powerful economies, and are more vocal in their welcoming of migrants. We’ve all seen the great acts of human compassion shown by volunteers. We’ve seen the activist convoys that went from Vienna to Hungary to transport the migrants. We’ve seen the wonderful reception of migrants in Munich, and the kind Munich police officer that let a child wear his police cap. 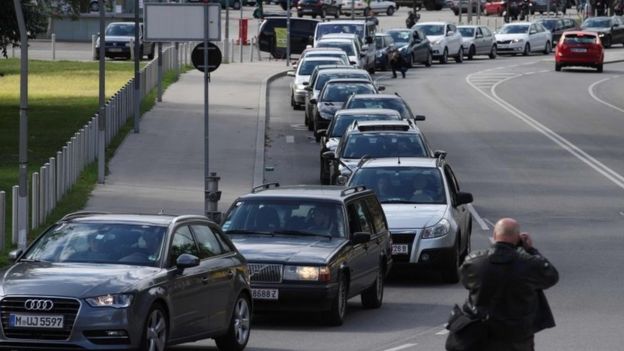 Above: Volunteer convoy going to Hungary to transport migrants. Below: German police officer letting a child wear his police cap as volunteers welcome migrants to Munich

What we mean to say is: it’s these acts that in the end that make a difference. They inspire millions around the world, they warm our hearts, they connect us to each other, and they make us one. Regardless of what a government officially does, or what it has to plan for, it’s these acts of human compassion, acts by ordinary people that are just like you and us, that truly shine and make the world a better, safer and a more humane place.

We all joined Duolingo believing in the idea of providing free education to the world, the same idea of human volunteering, that in its core has the power to change the world.

According to official German records of asylum seekers, out of almost 200,000 that officially applied for asylum this year from 1st of January to 31st of July, almost 30% (Syria + Iraq + Eritrea) are Arabic speakers. Those are the ones that have applied, let alone the ones waiting to apply as Germany is set to expect up to 800,000 migrants this year.

More numbers on the issue: Crisis in Graphs.

From this standpoint, we would like to dedicate ourselves to a cause as noble and as human as this. We, the arabic contributors on Duolingo, would like to push Duolingo into an even better position. A position where it can help hundreds of thousands of migrants in learning the languages of the countries they sacrificed a lot to reach.

mvchamad - B2 German, B2 Swedish, living and studying in Gothenburg, Sweden.

We like this idea and want to get something off the ground soon! If you or your friends would like to contribute and speak Arabic and German, please apply: https://incubator.duolingo.com/apply

Hello Myra, and thanks for replying! You mentioned German but you did not mention Swedish, does that mean that the team is only considering a German course (and not a Swedish one)?

Yes!! Swedish/Arabic applicants are most welcome too. We can't do everything at once but this would also be an important direction to cover soon

Adding Finnish for English speakers (and Finnish for Arabic after that) might also help as Finland is definitely among the most attractive countries (to refugees) with no language course available. Those refugees who don't speak English can surely use Duo to learn that first.

I find the amount of downvotes this has gotten (10+) quite extraordinary even for a post mentioning Finnish.

Some people are just on the internet to be angry about things, don't mind them my friend. :)

I downvoted your post, because it has nothing to do with the topic. This refugee crisis is a very serious problem and this Duolingo initiative can be very important for it.

But you probably know that...

[UPDATE]: We just started building the German for Arabic course with a wonderful team in the incubator. Typically courses take a few months in phase one before they become available to learners in beta. German/Arabic bilingual speakers may be able to speed up the process by applying to lend a hand :)

Woohoo! Great job! Thank you all for your efforts!

Thanks for making this happen so quickly!

Hi Myra, I'm very happy to see projects with the intention to help social integration take off so quickly, but I'd like to know if there are any intentions of making reverse trees for the exact same reason? It's beautiful Duo can lend a hand in helping one peoples find a home with another, but this does leave me to wonder about how peoples in host countries can come to better meet/help the situation, as well. I know that's a well repeated question, but I also feel this is the right place to ask :) Thank you.

Excellent initiative! Germany will be overwhelmed with the number of Arabic speakers needing German courses, this is where Duolingo could really make a difference.

Absolutely. Let's do this!

I agree with everyone else. Duolingo German-Arabic / Arabic-German would be such a great tool to have in the current situation!

We are all aware of that Germany is handling a number of refugees uncomparably higher to that of Sweden's. The importance of a Swedish course for Arabic speakers, however, lies in that Sweden is where the highest number of refugees per capita live, and that the institutions responsible for teaching Swedish to foreigners is considerably less prepared than the ones in Germany.

I applaud your initiative!

My Uber driver last week was a Syrian refugee and in only one year in the U.S. he had taught himself quite good English, which was very impressive to me. He was a high tech guy trying to reposition himself in the industry here with his life completely upended. The disruption to your life in such circumstances must be overwhelming, but he was focusing on the positives.

As Turkey has the most Arabic speaking refugees (over 2 million) how about a "Turkish for Arabic speakers" course? Unfortunately I am not competent to contribute.

We are working on that too, there is a season for all things.

That season started about four years ago :( Way before the current immigration wave to Germany and Sweden...

But most Europeans and Westerners weren't even aware there was a refugee crisis until just now. And they still don't seem to care about the Syrian refugees in Turkey, mainly because they don't get the same media coverage.

Great - so if I find friends who are competent and willing to help should they contact you or is there something in the incubator?

There is nothing in the incubator yet, but they can apply in it. Now we are searching for contributors.

Yes, this would be awesome! I'm helping a bit in my church's effort to provide German courses for the refugees in my village, but it's rather hard because we don't speak any Arabic (or Albanian, which is the other big group) and therefore can't explain things by analogy with their native language. And they generally don't speak English either.

Maybe for a "German for Arabic" course, as it's needed right now, it would be worth trying a "release early, release often" approach? Like start beta soon, but with a rather small basic tree, and then extend and improve it while it can already be used?

Many of us in these countries would be pleased and honored to speak Arabic as well to make things easier for these people. I can only imagine what a pleasure it would be to meet people enthusiastic about their own language and culture, so I would LOVE to see Arabic for English speakers, for example, as well.

In the name of empathy and solidarity.

What a great idea. I would like to have Arabic for English speakers as well. We can communicate both ways.

That'd be great! A friend of mine came here as a refugee 3 (not quite sure, but I think so) years ago and therefore speaks Arabic as his native tongue and German nearly on a native level. He spent most of the summer holidays translating between the refugees and volunteers in a refugee camp. Now that school has started again he (as well as many others I suppose) doesn't have time for that anymore, although here's actually a need for anyone who can help, most of the problems that arise are communication issues (or religious issues but anyways) (and btw almost everyone can help - be it with donating money, clothes or translating). So I'm sure such a course would be helpful. Duolingo just has to support that idea! :D

If he just has some hours a week to help translate or build a course, please ask him to apply. I sincerely hope that Duolingo starts both courses very soon!

The refugee crisis saddens me. I hope that Duolingo can get this started as soon as possible.

So much THIS!!!!!! I have been thinking about this before and I think this is just an absolutely wonderful idea!

Great idea! In my opinion, there's no reason not to kill 2+ birds with one stone and fast-track the 'Arabic for English speakers course'

My reasoning: English is a more universal language than Swedish or German alone. Additionally, other countries expect to receive a reasonable amount of refugees (USA, Canada, Australia, UK etc) and these countries would benefit from these courses too.

What do you all think?

Such a sad thing to see. And ironically, the country I am in is partly responsible for it. However, this indeed does increase the need for Arabic speakers in Europe.

My mother being a Russian immigrant from Grozny, Chechnya, it really is true the situation in most of their mother countries. Poor leadership, constant wars, etc. I'm glad personally that Duolingo is helping out, and the contributors of coarse to the English for Arabic Speakers.

The way people are stepping up to help during this crisis is truly inspiring. I'm not in a country that is accepting many refugees at this point, though I'm hoping that will change in the near future and that I can help out when it does. In the meantime, kudos to everyone who is working to develop a language learning platform for these people.

I was in Palestine recently and I was surprised by how many German speakers there were, apparently many Palestinians go to school or find work there. Many people also spoke fluent English as well, and occasionally Hebrew. (Hebrew is another language that would be essential for Duolingo to get for Arabic speakers, as often Palestinians and Israelis are forced to use English as a bridge language since neither know each other's languages)

96.8% of Germans would agree, that someone is German, if s/he can speak German.

Only 37% would agree, that someone needs to have German ancestors to be German.

Brilliant. Simply brilliant. Eager to hear updates about your progress with this. I will be supporting you guys with this endeavor as you begin the steps in such a venture as this.

Excellent idea. I hope it be a reality as soon as possible.

This is a really wonderful idea!

This is a wonderful drive, I can't wait to see what you Arabic/German & Arabic/Swedish speakers will do to help these migrants. Best of luck!

Congrats! Looks like Duo was receptive to your proposals. I may not agree with the particular manner in which the European leaders have decided to handle the refugee situation, but I think we can all learn some lessons from your determination and we can certainly agree that there are many people who do indeed need some form of help after what horrors have happened in their country!

Thanks for your remarkable service