Roughly a week ago, I thought about languages spoken by Native Americans somewhat out of nowhere. I'm not sure why, but I just did. Immediately, one language came to mind: Cherokee

Admittedly, I wasn't as interested in the Cherokee language, but rather the Cherokee syllabary. Prior to looking it up, I did not even know what a syllabary was, even though I've known the creation of the Cherokee syllabary for about six years now. Now that I know what it is, I find it to be really smart, since instead of having one symbol per letter, you have one symbol per syllable. While this does mean that there would be a lot of symbols- 85 (originally 86) to be exact- and the occasional transliteration issues some words have, by understanding each of these symbols (shown below), I seem to understand how to pronounce each word written in this script (though translating is a whole other thing) 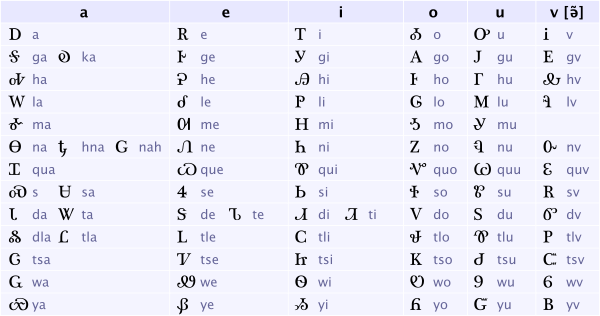 While I don't intend to study the Cherokee language itself (at least not at the moment), I find the syllabary intriguing, and one that I would like to continue looking at in the future. Also, I would like to make a specific mention of the user TommyZamora14, who makes posts about Cherokee among other things, including Nahuatl, which I began learning through his discussion posts. It's wierd how I had little interest in Native American languages until now all of a sudden, but then again I'm like that with some other languages that I eventually decided to study full time. Keep up the great work!

Thank you for the mention! Yes, the cherokee script is lovely, and I to often just study the writing system of a language. Except I study the full Cherokee language. If anyone wants to write their name in cherokee or just see what it's all about, check my post here : https://www.duolingo.com/comment/10757676

Im so glad you are interested in the syllabary! I'm also glad you enjoyed the Nahuatl post, I just posted a new lesson today.

Japanese also has a syllabary

October 10, 2015
AboutDuolingo English TestMobileGearHelpGuidelinesJobsTermsPrivacy
Learn a language in just 5 minutes a day. For free.
Get startedLogin