Shady_arc, I don't know if you'll ever see this post, but thank you! So many times, I've looked in the comments and found consistently amazing and intuitive comments from you. If you're not a teacher, you should be. Thank you for enriching our study of Russian.

The difference comes down to verb conjugation. The verb in this case being знать 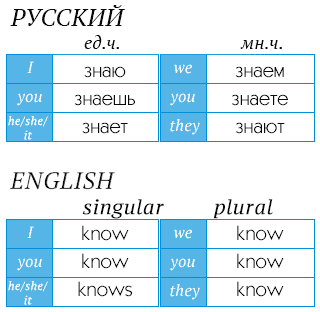 How do we go about the informal ты in this case. Or do we just not.

I think that it's твою but I may be wrong

How does "know" act upon your book, to put "your book" in the accusative? If Tim cut his finger, I could understand "cut" acting upon "his finger". But knowing a book ? How does one "know" upon the book?

Perhaps am not understanding the accusative case. From the notes, it seemed to be saying that the verb had to be acting upon the direct object. Can anyone help me be clear on this sentence? Thanks!

This is just how the verb "to know" works. Imagine a language being a theatre. The number of actors they have is limited, so different roles are performed by the same people. If the role does not seem to clearly stick to some archetype, the director just assigns it to the actor they think works best.

For «знать» and «понимать» the director seems to favour the Accusative. Admittedly, it is more obvious for more straightforward actions like "to take a book", "to give a book", "to write a book".

It might not work for a different verb or a different language, though, I think, most European languages will use "know" with Accusative (if they have cases at all). Nevertheless, the use of certain cases by participants, while oftentimes "making sense", is the property of a word meaning the action in the language; it is not an objective characteristic of the action itself.

It's actually just the same in English: You say "I know him" (the objective case) instead of saying "I know he".

Ditto in other languages with more extended uses of cases, like Shady_arc writes.

"Tim cut his finger." What did Tim cut? His finger.

"Tim knows your book." The transitive verb know is not standing alone. What does Tim know? Your book. It doesnt really matter how.

In Russian, the accusative case is used with transitive verbs.

Roughly (very roughly) speaking, Accusative is equivalent to "direct object", which does not use a preposition: I see a cat, you said words, we ate an apple, I love pizza, they play football, &c.

Now, dative case is roughly equivalent to indirect object (which needs a preposition in non-declined languages): I said so-and-so to mon, you gave a gift to her, the teacher read an article to his students.

(English in particular has a way to skipping prepositions in indirect objects, when in form of pronouns, that is remnant from dative case - so some examples might be phrased otherwise).

This equivalence doesn't work 100% of times, but it is a good start.

It could be either (theoretically speaking). Like in English, possessives have a number of meanings.

I wrote "твоя книга". Is it also correct and what is the difference?

Not really, you should declinate твоя in the genitive case, so that's make твою книгу

It should be actually in Accusative, and твою книгу is actually the Accusative.

I wrote "Tим знает твою книгу." And it wasn't accepted. Is there something wrong with that?

Only the T is wrong (as far as I can tell). It should have been accepted as a typo.

The T you used in your post is a Latin T.

Cyrillic and Latin symbols may look identical or very similar in modern fonts but they are still different symbols for a computer, the scripts assigned different codes in Unicode.

There are many free Russian keyboards apps and websites available, or you could buy a Russian keyboard, or you could configure your computer to switch between English and Russian input. They are already providing the free service of teaching you Russian, I'd say they're more than meeting you halfway.