I can't write the letter

Get a russian keyboard from the app store

You can juste add it natively without downloading an extra app.

How do you do that?

How can I get it, please reply?!

Check your "Language and Input" settings, which you may find in Settings->Extended Settings. There, list of keyboards used is given -- tap the one you prefer (in case you have several; for me it's Swipe) and proceed to its vocabulary settings. There, an option to add new languages is what you seek. sry for english

Bless you for this.

I can, and I didn't downloaded any app.

I'm only using the Samsung's native Russian keyboard, that can be downloaded on the cell phone.

If your phone uses g-board, click on the little gear button then it will say languages then you can add russian

You can go to settings and change it

I can't write the letter

What is the difference between "это" and "этот"

So it suggests me to use russian keyboard. It's okay, i can set it, but i don't know the location of the character and i can see it only at google translator. Isn't it problematic?

The location of the letters will depend if you installed a Phonetic keyboard(where the keys mostly correspond with their closest latin counterpart) or the ЙЦУКЕН keyboard (which is Russia's most commonly used keyboard layout). If you installed the ЙЦУКЕН, this site is a very good resource for learning how to touch type in Russian. To use the site for Russian, you must go to the settings, click on the "Keyboard Layout" settings and select the Russian keyboard. Good Luck!

I have that for years (Windows includes it), but still i can't memorize it. I can type at full speed with turkish, that was much easier to memorize (it is basically just a standard qwerty with some extra). The thing i've tried to suggest is that maybe you could somehow help the newbies somehow about the typing part. By the way i know that the alphabet is the easiest part, while most of the outsiders find that the hardest :) Also i could never use the "english phonetic" writing, Hungarian is just much better for that :D

For those with a touch screen monitor/computer, use the on screen keyboard to learn the locations....

To fix this you need to press settings and make sure you are in the ""Learning Mode" settings. You will find two sliders next to eachother. The one on the right says "Expand Alphabet Size". Slide it all the way to the right and it should allow any letters in the alphabet. Hope this helps! :)

Bro, you are awesome. Have you some lingots.

Glad it worked for you and happy learning! :)

Eventually you'll figure out the keyboard.

It would be great to see it on the same screen. It's just annoying :D

If I remember correctly, the development team was working on this when the Ukrainian course was nearing its launch date; however, they found that there is just not enough space to fit a whole keyboard in the space it would have had to fit in.

I use transli.net, instead of installing anything. The keyboard translation is very intuitive there.

just use the on screen keyboard in windows

Answering more than a year later :D Really useful. The on screen keyboard is quite a slow mode for the purpose. Much easier to learn to use the cyrillic keyboard.

Русский is Russian for "Russian" right?

What's the difference in pronunciation between "э" and "е"?

If Е is after a consonant, two things happen:

In Russian palatalization is usually referred to as "softening", and we call consonants "soft" and "hard". This is way shorter that palatalized and non-palatalized.

Unstressed э and е both change to something like "i" in "pit" or "ee" in "meet" (at the beginning of a word е becomes "yeeh", retaining a bit of its initial "y" sound).

It would be really great if we could alternatively use a cursive font like Mistral in MS Word, to start getting used to the very different Russian script!

Duolingo does not have a Cyrillic font. It uses your browser or device's defaults for Sans Serif fonts. 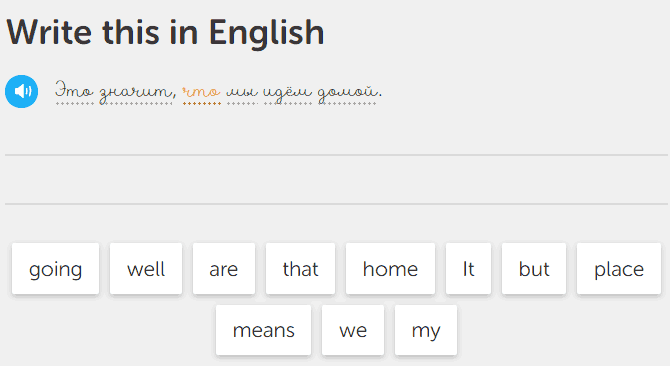 Great to know! BTW, I note that for those using Chrome, if you just go to Settings > Customize fonts, you can customize the Sans Serif font to "Segoe script" for a pretty good cursive, similar to what Shady_arc found above. Believe me, it's tough at first, but obviously it must get to be second nature before long...

Dont have a russian keyboard

What kind of computer do you have? Or phone or tablet. I can explain

I am confused. I answered "Dima, ето Tim." and it told me it was incorrect. How is this different than the correct answer?

Can anyone tell me the equivalents (e.g. 3 = oborotnoe e) so I can type without the Russian keyboard (I don't use phone and the computer is not mine to install keyboards)? Spasibo in advance :)

Could you use зто тим when for exalpel answering a phone like you would in english? "Hello this is Tim"or is it only useable when introducing some one to some one else?

Because you wrote ЗТО instead of ЭТО. "Зто" has no meaning. Actually its very difficult even to pronounce it.)))

It gave me a correction saying my answer was incorrect, but the correction was identical to the answer I gave.

Дима это - Тим Is is wrong?

Where is my Russian keyboard??

You can add/remove languages and keyboard layouts in your Settings or Control Panel. On Windows, it is in Time, Region and Language. On mobile devices, it is usually in System → Keyboard/Input settings or something like that.

If you already have at least two languages, Windows displays a language bar in the right part of your task bar. You can access language settings quickly from there.

First time writing in Russian, thanks to SwiftKey Keyboard. Man, the keys are disorienting, there's so many letters! I guess it's gonna take a while for me to get used to this.

It doesn't let me put these keyboard

Interesting how this doesn't provide letters with accents like some of the other languages. This means I will need a Russian keyboard, a guide with Russian alt keys, or an add on app to complete these lessons.

In this day and age, your PC already has support for all major languages.

Windows 10 and Mac OS have phonetic layouts in case you do not have a Russian keyboard and do not want to memorise the standard layout (йцукен). Windows 7 does not have one but you can download it (Microsoft lets users create custom layouts).

(on phones/tablets it is usually not as hidden; the layout is also not an issue)

https://sites.psu.edu/symbolcodes/languages/europe/cyrillic/cyrillicchart/ Link to a list of Russian letter codes for use with a keyboard.

You will need to type these out in Word first if you go this route, then copy and paste into Duolingo because apparently the app is not friendly to alt codes.

Also, if you go this route, you will require a number pad on your keyboard.

The easiest solution is to add a Russian keyboard if you're on a Windows operating system.

Windows 10 - Go to "Settings." Go to "Time and Language." Go to "Language." Click "Add a preferred language." Add Russian. Next to date and time you can now swap between ENG and РУС (Russian) by clicking the ENG icon next to the date and time on the lower right hand corner of the screen. If you are using an English physical keyboard, you will likely want to use a virtual keyboard. Go to "Settings." Go to "Ease of Access." Scroll down on the left side of the screen to "Interaction" and click on "Keyboard." Turn "Use the On-Screen Keyboard" on and you will be provided with a clickable keyboard.

There is no keyboard option! How can I write something in Russian?

What is the best keyboard to use different languages?

Not sure. St. Timothy (the writer of that Bible book) is a saint venerated in the Eastern Orthodox Church, from which most of the Russians are from. I guess they are just giving us a much easier name to spell. Some Russian name tend to be actually longer, like Alexander, Nikolai, or Anastasia. Or maybe "Tom, Tim tam." just sounds a little bit funny to them.

I dont have russian keyboard

i dont have a russian keyboard

I'm on desktop, so I can't type in the language, and can't just change a setting for a new keyboard.

I can't write this on my keyboard!

Where do I find the letters for russian alphabet???

How do I type in Russian? My keyboard is English.

how are you supposed to write this in russian? I dont have a russian keyboard lol

I cant type in russian

I can't write Dima, this is Tim in russina it won't let me

It was so ez

Don't have access to alphabet. Should jave alternate choice

I can't write those Russian letters Duolingo how do u do it.

Dont have a russian alphabet keyboard :(

My answer shulde've been accepted. But it's not.

This is a decent guide for available Keyboard layout for Mac Users: http://www.russian.ucla.edu/beginnersrussian/student/translit-keyboard-handout-2007.pdf

What would an English translation be for "Дима, вот Тим"?

The syllable is unstressed. We still spell vowels in a lot of different ways, depending on how the sounds got there, even though the pronunciation of standard Russian these days only distinguishes between a-like, u-like and i-like vowels in the unstressed syllables.

Could you use зто тим, like this is tim said by tim when for example answering a phone, insted of telling some one else that this is tim? Or should you just say я тим like I am tim?

I don't have that letter in my Russian keyboard. I only have e.

Is it a Ukrainian keyboard? By the way, if you are working on Windows, then you can ask Windows to show you what is that keyboard you installed right there in the keyboard options window (select a keyboard and click "Properties").

You can also creat you personal layout here: http://www.keyboard-layout-editor.com/#/

I found it yesterday. Just imagine — no else one will be able to type in Russian on your computer fast! :)

I'm using a Russian Keyboard. I've actually got one that Mnemonic, and one that is not. The letters they are using in the lessons are not Russian. I THINK they are Ukrainian. My wife is Russian and she does not use those letters.

I think Duolingo uses Latin transliteration by default. There should be a small button at the top that says Aa or Яя. Use it to switch between display styles.

We use Cyrillics in our lessons.

Hey, could there be a way of sharing layouts on the personal layout site? Feeling too lazy to create one which is a close tie with my English one, and I believe someone must've already done that.

For anyone having troubles with learning the Russian keyboard you could do what I'm doing here http://i.imgur.com/Wp8kjIT.png I took a screenshot of the Russian keyboard layout and have it next to my Duo window. I am also learning the alphabet more easily by doing this together, personally I think it helps and works well. Just like with any keyboard you've learned you'll pick it up naturally after repetition.

Why is it éto and not это?

It is это, but i guess the system accepted eto as an answer in latin scripts

i cant use accents

You don't need the accents, we normally don't use them in Russian, except in some dictionaries and sometimes during Russian classes in school. The only thing the accents do in Russian is telling there the stress is.

I thought "этот" is used with masculine words but I see "это" is used for the same words sometimes !!