Translation:No, this is not a notebook.

Gaaaahhh I hate so much when you get it wrong because of a typo in english!

This is all great info. I never caught the differences in my Russian grammar books, so im glad you all pointed out the subtle differences. Thanks!

Is тетрадь an example of final constonant devoicing to т?

Yes, of course. /dʲ/ is a voiced consonant, and it comes at the end of the word—but not before another voice consonant. Thus, it gets devoiced to /tʲ/.

Copybook is an American expression - it is almost never used in English English.

It's not used in American English, either. It may have some specialized meanings. I think that lawyers used to keep copybooks, which were copies of important documents produced by the office. There are other meanings to the word, but it's not in general use.

I'm having trouble understanding when to use 'не' and when to use 'нет'. I wrote the second first, but reconsidered for no reason than stylistically, the other one looked better. Can someone explain?

Pfff, simple reason is simple. Спасибо, Theron. I have obviously been slacking too much, recently!

How to say "These" and "These are not notebooks"?!

In this sentence, "these" would still be "это". You might want to read olimo's guide: https://www.duolingo.com/comment/11536858

To say "these are not notebooks" you would need the plural form of тетрадь: это не тетради.

Is there a difference between "this is no notebook" and "this is not a notebook?"

"no notebook" is a very unusual English usage, reserved for emphatic statements of some sort, often about exceptional things, while "not a notebook" states that the thing is simply not a notebook, but something else. For example: "This is not a notebook, it is a formal book on Russian grammar". But "This is no notebook - it is a complete plan for the end of the world".

Here's the way I learned for German and Russian when gender agreement with the noun is actually required, and when it isn't. Unlike Italian and Spanish, where agreement is always required, in Russian and German, there are times when you should use the neuter form instead.

If это is separated from what it equals (это = тетрадь) by a verb, or by the implication of a verb (since you do not actually see "to be" in this sentence), then you should use the neuter form (это). Agreement is not necessary. However, if это is on the same side of the sentence as what it equals, and is NOT separated by a verb (visible or implied), then you must make it agree with that noun, and you would say эта тетрадь.

I will illustrate this for you in German as well, since the language structure and vocabulary are much closer to English and it may be easier for people to see there. :-)

Consider the sentence, "Das ist nicht eine rote Blume." (That is not a red flower.) "Das" (That) serves the same purpose as это did in our Russian example. It is neuter. However, Blume is a feminine noun. But notice what happens with "rote," (red, f.) which is NOT separated from Blume by the verb ("ist"). The masculine/neuter form of this word is "rot." But because it is on the same side of the sentence as "Blume," it must agree in gender, hence "rote Blume."

As you have likely noticed, this would not be proper Italian or Spanish, since agreement is expected in Romance languages across the entirety of the sentence. But in Germanic and apparently at least one Slavic language, that is not true.

Please let me know if this explanation helps any!

Unlike Italian and Spanish, where agreement is always required,

Russian "это -" is a kind of Spanish "Esto es" and "Eso es", that do not require a gender agreement either.

you are correct. I was going to write the same answer. ESO NO ES UNA ROSA, donde ESO es un neutro también > And it is the same in French ( my language) CECI EST UNE ROSE. it is also neuter.

Confirming that this is true for all Southern Slavic languages as well ;-)

"This is ..."-type sentences always use the word это regardless of the gender and the number of what follows.

Nice timing lol, are you learning your own course ?

Ain't got no time for that. I just read discussions, apart from correcting reports. I am pretty sure that we may have about 10000 sentences, which means that understanding the logic behind people's mistakes is also important.

I'm going to give you something helpful:

However, of nouns ending in a ь about 65-70% are feminine (the exact proportion varies depending on what frequency slice you take).

Any tips on how to hear the difference between "тетрадь"-the single, and "тетрадм"-the plural?

One of the tricks to hearing something is to pronounce it several times over, starting at the syllable level very, very slowly, and then building up a word, so that it forms in your mind. When you brain knows what to expect, it will hear things a lot more clearly. That means learning the rules of pronunciation, then adjusting words as you hear them spoken by native-speakers (or computers, which often do a good job of it).

I speak every sentence and phrase in every exercise in Duo, even if it's not a dictation exercise, to practice sounding the words, playing back the audio, comparing, trying to get it close. Takes a lot longer to do each exercise, but ultimately helps learn aural skills much more quickly.

I'm studing russian at university, they told тетрадь is a book

In what country? What word did they use?

I'm struggling to understand: why couldn't I translate it to "No, this is not my notebook"? Would it be "не это не мои тетрадь" then?

No, you couldn't. You've indicated why: There's no "my" in the sentence.

Also, мои is the plural form of "my", and тетрадь is singular feminine, so you'd have to use моя тетрадь.

There's a huge difference between ь and ы. ь is not pronounced, but affects the pronunciation of the consonant before it. ы is a vowel with a definite pronunciation, as in мы vs. тетрады. If you want to hear the difference, copy the words into an online translator like Google Translate, then press the little speaker icon, and it will say the words for you. Also, for native speaker pronunciation, try forvo.com, but there's a more limited number of words pronounced there.

Please add, no this is no notebook as a correct translation

Again i forgot to write "a" before word notebook:-)

Can someone explain when ь is silent?

The letter does not make any sound in the modern language. It modifies the pronunciation, though:

There are a few cases where it does not matter:

I know this doesn't fit here but what does № mean? I see it on my keyboard but I haven't yet learned it

It is the Numero sign. We use it in Russian; English speakers usually prefer "No.", or #, or just write the number. 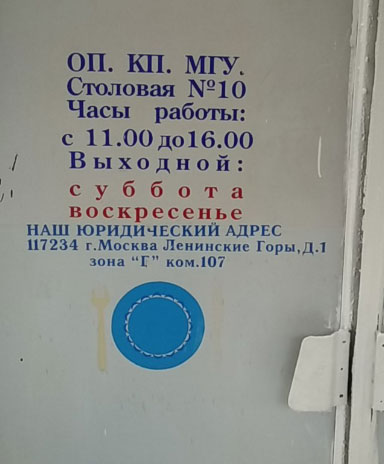 Does Notebook here mean a computer or just paper? Or maybe both?

A laptop computer is ноутбук. We also accept it here, since there is literally no way to know the context.

Тетрадь is a notebook used for taking notes and doing assignments when you study a subject.

Спасибо. Thank you for clarification. It's funny that the Russian word clearly comes from the word "notebook" just in Cyrillic letters.

A lot of computer terms are loanwords from English. In general, English is the primary source for new Russian loanwords these days.