Ha! Just visited the discussion to post the same, and saw you'd beaten me to it. I was two questions away from a perfect run, then got the horrible one with a negative future tense ("will not show you my tongue"), which I couldn't do, even with hints, swiftly followed by this as an audio test. I feel really cheated when it's been plain sailing all the way through, then I get final questions like this.

This has me on the point of quitting

What's really funny is that in the Android app it didn't ask me to do a single thing other than Confirm.

True what a PITA question omg

What does Tense mean? Like the perfect tense, would it be the future tense?

Past, present and future are "tenses". Imperfect and perfect are aspects of any tense (though some languages don't have both aspects in every tense).

I'm at level 16, about 3/4 of the way through the tree, and practice every day, and I still have to replay this about ten times to finally be able to parse and type everything as a listening exercise. Something isn't working.

well I mean Duolingo doesn't guarantee you are going to learn a language magically, it's just a help for some true learning process, or just a hobby (but just that, a hobby)

Russian native speaker here. The sentence is long but pronounced correctly and with usual talking speed so I think it's fine here, if a bit challenging.

I was thinking of bush babies! http://www.strangecosmos.com/images/content/126460.jpg

yes they are so cute aren't they :)

The exercise came with the solution fully written!

Инопланетянин is only about aliens from another planet. (иной, другой - another, differ; планета - planet)

Well yes, what other kind of alien is there?

What about "alien" as in a person who is alienated from society? Google Translate has отчуждать for "to alienate" and отчужденный for an alienated person.

I know that the movie "Alien" in Russian is called 《Чужой》. 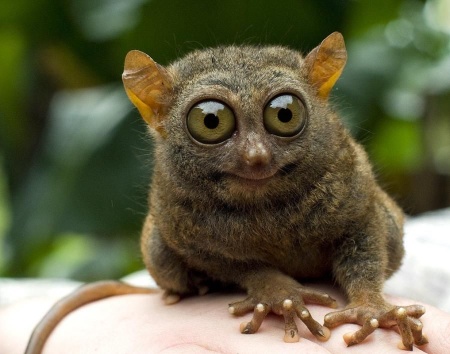 When using the app, for some reason duolingo automatically filled entire translation without leaving even a couple of the words to put in myself

This happened to me too. I'm confused.

The punctuation makes it difficult to translate it well

I think a sentence this long and complex is placed a little early in this course to be anything other than frustrating. I remember from intro psychology classes long ago that the typical person can retain about seven nonsense syllables in memory before losing ability to follow. At this stage in our learning, where we haven't got much of a Russian vocabulary, and many of the sounds are pretty alien still, this sentence in practice is somewhat over twenty nonsense syllables in a row, with the added complication that there are some interesting extra little twiddles because of the endings (which are the ые and which are the ие situations, why does the vowel drop out of the middle of mouth when it goes into the plural, ....). It would work more efficiently in initial use as a translation exercise, with the possibility of hints, rather than as an audio exercise. I expect it is going to take another ten or twelve passes through before I can get this many subtle things down in the short run (three tries so far hasn't done it!), and I suspect that it won't actually take in the longer term for many more tries. Seems out of character in difficulty with most Duolingo exercises!

It's really difficult to keep up with the audio, though, but that's also due to the Computer voice which is the same for me in some very short sentences.

Someone in Russia decided рты was pronouncable.

Aliens! How would one say that in Russian by the way?

The text came up before I'd entered it?

It seems to me like the English translation of this sentence would flow more naturally if a "with" was inserted right after the dash.

Perhaps not a literal translation, but isn't that what's implied by the dash, sort of?

Can't we say "large" eyes, rather than "big" eyes?

Did you try and it was rejected? Seems perfectly acceptable to me (native UK English speaker). If it wouldn't have it, I'd report it.

They have interesting faces – small noses and mouths, but big eyes.

This was not accepted! Why?

presumably because by switching the order of mouths and noses for no obvious reason, it is assumed by DL that you have confused the two translations. Perhaps not an unreasonable thought, since they were words learned in the same lesson, along with some other body parts (although in this instance one of the words actually sounds a little similar in the English and Russian). I can remember being inadvertently tripped up in a translation of дяди и тети, which I translated as aunts and uncles, since it almost always seems to come up in that order in English, which I found at first a little annoying but decided on a few moments reflection was a reasonable thing for DL to have done.

it must be nice to look so perfect :)

You shouldn't talk about "them" like that, it's offensive. What if there's one of them nearby?

Couldn't the hyphen imply a "with", as in "- with small mouths and noses, but big eyes"? This is rejected, but just wondering... The English would work better if you say either a "with" or "having" which are arguably understood even in their absence!

Is duolingo now into anime

Big and large have the same meaning. Duolingo's definition of большие is big or large. You need to quit grading as incorrect "large" when used instead of "big".

In this sentence, does the "-" makes the function of a ":", like "They have interesting faces: small mouths and noses..."?

Haha was 100% pre-filled what a waste of a question

You need a , and not a slash, between "faces and small".

Cannot we say “lips”?
“ They have interesting faces small lips and noses but big eyes” - why it is wrong?

The answer is correct but not accepted

Again, we do not use hyphen's in sentences of this type, we use coma's. Can't your correct your mistakes?