Is вот the same as здесь? Or is there a difference?

Вот is an introductory word, meaning "Here is". Здесь is an adverb, answering the question "where?" Столы здесь. - The tables are here.

I hope I am right ;) if it's nit correct I hope people will give us a hand?

thats cool thanx for xplaining that

Hi, I'm adding here a link to an excellent explanation of the difference between the words https://www.italki.com/question/229276?hl=ru

I always think it says вот Сталин (Here is Stalin) 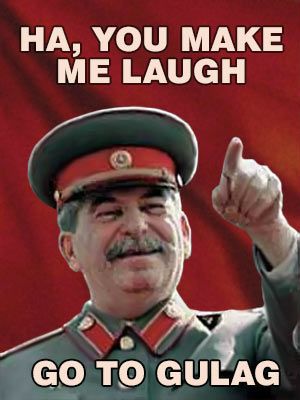 The most literal translation would be "Behold, tables."

No, "Вот" would be "voici" (about close objects). "Voila" should be translated "вон" (about distant objects)

Haha that sounds funny. Like it's some grand gesture :D

Could I say "here are some tables"?

I think you could (native speaker)

If you'd like to say "Here are some OF THE tables" it would be "Вот некоторые столы" or exactly same construction "Вот некоторые из столов". In that case this sentence would have slightly different meaning.

I somehow always think about Stalin when I heer that santece.

Why is not "The tables are here" accepted?

Because there is slight difference between two sentences:

Actually it's only my guess what exactly the authors where trying to put into this example. Personally I think that both variants may have the same meaning depending on intonation.

"The tables are here" - Столы здесь.

could "here are some desks" be an acceptable answer here?

Is столе an acceptable plural for стол? I answered this very question by writing где столе and it came out to be right. When I wrote that I thought it would come out as a wrong answer, since, although it was what I heard, it didn't make any sense to me because as far I know столе is a case other than nominative, and I didn't remember the nominative plural form of the word стол when I was answering the question. So is столе an acceptable nominative plural form of стол?

One of my girlfriend's cousins uses вот as a filler. When she is starting a phrase sometimes she uses it, when she is confused or she doesn't know how to answer, and I of course would feel weird to ask her, so, what would it mean if is being used like that? Would it stand for something like "well" or "uhm" or some fillers like this?

The word "Вот" may mean the following:

There are more meaning in the dictionary, but they are basically other forms of the 4 meaning, that I wrote about.

Thanks for the explanation, that clears a lot of things :D Have a lingot :D

could this be translated to "here are some tables"?

Now i want a shot of vodka

Is столы in Nominative plural or Accusative?

Here it's the subject, so Nominative, but Accusative would be written the same way.

how do you know when to use are, and is? im still confused

Well, single would be Стол and the plural is Столы. This is the most straigh-forward way to form a plural noun in Russian: add ы or и letter.

Unforunately in some cases it will work differently and you'll have to memorize plural form, but I actually cannot come up with any example of those right now.

This sentence is very short. The meaning will vary strongly depending on word stressing in the sentence, let alone word order.

I'd recommend you to practice direct word order in such short sentences in Duolingo. You'll anyway be able to see the difference only in the spoken language.

Why is "Here are tables" not correct?

If you are pointing to the tables that are in front of you, that implies, you know exactly what tables you are talking about. So indefinite article is not applicable here, I believe.

Why do I hear 'staouy' instead of 'stolyi' for столы? How should we pronounce it?

It just seems this way to you. I hear quite clearly "stolY", the way it should be. (Native speaker)

Sorry for contradicting you, a native speaker, while I'm just a learner, but I understood that the plural form, столы, has the stress on the last syllable, thus the letter 'о' is pronounced like an 'A'. Am I wrong?

Yes, the "o" letter is often pronounced as "a" when not stressed. It is called vowel reduction and is found in many languages aside from Russian.

You can still pronounce these letters as "o", but this is considered old mythical and/or redneck accent. For example Russian Santa Claus called Ded Moroz mostly ignores vowel reduction.

There is also the contrary accent. Moscow citizens are believed to reduct "o" sounds to "a" even when it is not needed. It's not widely spread (I personally live in Moscow at the moment), only among people with bad education I guess.

Anyone know why столы is pronounced as "сталы"?

And why is "the tables are here" wrong?!!

Suggestion: Don't mark the answer as correct with a "typo" if someone uses the wrong plural ending. I put "столи" when it should have been "столы". So I was wrong but it said I had a typo. That is not a typo. I was wrong. I didn't press "и" instead of "ы" on accident, which is what a typo is. Further, when going really fast, I often don't notice the "typo" message on the bottom, so in some ways it is training people the wrong information.

I'd you say столи instead of столы, you'd hardly be misunderstood, so I don't see a big problem here. Anyway, you can always report any of your ideas to moderators after your answer. There's no point to write about it here

When would i say here are the tables

Perhaps, when you're looking for the tables sections in an online store

It accepted столе but should it have been столы?

Вот столе is definitely a mistake

Bruh, my accent stuffed me up

Does anybody else have a problem with the app not accepting anything you say?

Why are tables written with o instead of a ?

I'm not sure how to answer that other than "that's how that word is spelled". It's just the way it is. Why do you think it should be an "a"?