Translation:Where am I allowed to smoke?

59 Comments
This discussion is locked.

I'll totally picture a smoking chicken to memorize this one! ;DD

I personally know that word because my dad always asks me to buy cigarettes from Russia when I go there. It is 5 times cheaper than in Belgium. The message that is written in the box is курение убивает (smoking kills).

Wow, it's amazing that they said that on the box

@Kevinguy14, if is it so, try googling: "cigarro mensagens" , you will be totally pleased with what every cigarrette pack in brazil looks like in the back!

I especially like the one with the long drooping ash and it says something like: fumar causa impotência. LOL.

Have that one in argentina, its dam convincing

We have this in Europe too.

Is this not the case everywhere?

Here in Mexico the boxes of cigarettes depict things like premature newborns and dead rats.

In the U.S. there is a required warning about cancer and death and so on. Plus a sin tax.

In Spain we have pictures of lungs and throats with cancer.

And in Russia too. 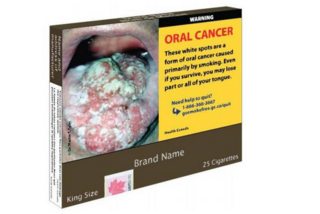 The same in Costa Rica

It's the same in India.

Have you seen Australian cigarette boxes? Google it if you feel like some nightmares.

yup i am from Australia, they really do not want people smoking

It's common in Hungary too.

When I first heard it I typed

Is the "am I" part strictly true? I feel that asking "Where am I allowed to smoke?" and "Where is smoking allowed?" are very different. I.e. One indicates the speaker is a smoker, the other does not.

Exactly, for example the first one with "am I" would indicate that the speaker... and the other may be asking that he wants to get away from the smoking area.

the only think I smoke is pork on the grill

The translation "Where is it allowed to smoke?" doesn't make sense. It implies there is some outside object (not a person) that is requesting a place to smoke.

The translations, I believe, should be,

"Where can one smoke?"

"Where is one allowed to smoke?"

Not so. In this case, "It" is simply there to provide a subject just like "It is raining". "It is allowed." "Smoking is allowed". Just like "Where is it possible to smoke?"

We could also consider that it as the kind of abstract construction we use with allowed some times, eg, Why can't I do x? Because it's not allowed.

I can't see the "I" in this sentence. So "Where smoking is allowed?" should be accepted, but it's not accepted.

Does this mean that, in Russian, "may" works as an adverb, and when asking permission you use the infinitive?

(If so, how do you ask permission on someone else's behalf, like if you're at a party and you want to know "can my brother come too?")

I'm wondering about this as well!

is мне used with можно when talking about myself

Depending on the action you are taking. It can also be я могу

I was given the option to choose between three forms of курить. Is this just the correct answer because it needs to be the infinitive?

No, because in English that sounds like a noun phrase rather than a complete question.

What is wrong this this?

But i strongly recommend that you do not use transliteration, but rather the true cyrillic alphabet.

Where is allowed to smoke? I wrote...

The reason this wouldn't be accepted is because of the English translation. That sentence doesn't work in English. It sounds like you probably get the Russian meaning just fine, but for Duolingo to work, the English sentences should in theory make sense also. There are a number of ways I might say this:

But in English, we'd never say "Where is allowed..." You MIGHT be able to say "Where is it allowed to... " but even that is a tiny bit awkward.

where are we allowed to smoke? Is this correct?

Not really, no. One thing you'll learn about languages is that things don't always translate literally. Russian and English are very different languages, so they're going to use different constructions for a lot of things. That's one of the harder parts of learning languages, having to learn how things are supposed to be written when they don't translate word for word.

i was thinking the same. consider that the given verb is in infinitive form rather than 1ps. i just wondered is it a fixed phrase for 1ps or could be applied generally. looks like the latter has it right.

"Where can i smoke here" must be accepted .

Can someone explain to me the word "mozhno", spasiba

Also can someone explain how to differently pronounce курить and курит?

Why am I ? When infinive?

Где можно курить? This really translates to Where can I smoke? Doesn’t it? Where is the word allowed? To be more precise, should Duolingo not be including the word ‘разрешено’?

Would "Могу" be acceptable here?