This English translation should not have a comma.

I was wondering about this -- so a better translation would be "I see that you like breakfast"?

Yes. Or even just "I see you like breakfast".

americans very commonly don't say "that" even though, same as in russian, the что is proper.

That's in fact what I put, and it was correct.

on my opinion, they are separated (by comma) sentences.... "I see" is like to say "ok" or "now I know" "ok, you like breakfast" the comma changes the meaning of the sentence

Exactly right. It's not "I am seeing you in the process of liking breakfast" it's "I understand"

"I see" is a tad bit more complex than "ok". Your example is the right definition though. However, in English you wouldn't pause after saying "I see" in this context, where as you woukd using ok. That would sound weird. There is a famous line from the movie Spaceballs where one of the characters says, "I see your schwartz is as big as mine." In the script there is no comma.

Most of the time you will never use a comma after it. Almost every sentence that I can think of where you might use it, you could often omit it. The same can be said for "ok" in most cases, but ok sounds a lot better with a pause.

Intro to hitting on Russian women who are just trying to eat their eggs in peace. 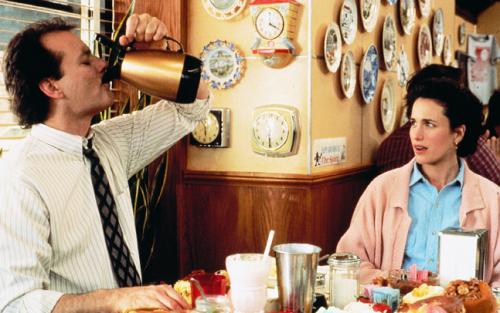 PERFECT. So much завтрак! (And the donut especially.)

Is it just a function of the program vocabulary or is there a reason to use the word"Лубит" rather than" наравица"_(Pardon my spelling).

In another discussion someone explained that "Лубите" is used for general statements about what you like and that the other word is used for something in particular.

It means that somebody likes breakfast in general.

Why is "I can see you like breakfast!" Wrong?

Me to Walter White junior

This phrase will never ever be used when talking about a certain breakfast, in that case you will always use нравиться. So it can only be used in the meaning 'You like having a breakfast in the mornings'

IMO, the correct translation should be: "I see you love eating breakfast / having breakfast".

I have the feeling that this sentence means that I see you would love breakfast. Isn't this a polite way when you see someone needs breakfast?

Thing is: the comma linking the clauses is mandatory in many languages other than english, where it is optional.