Translation:It is time for my parents to go to work.

It really sucks not to be able to read the lesson notes in the app. I feel like I'm blundering through dative without a clue about what I'm doing. :(

I made a table for each case. I haven't tested them thoroughly yet, so there could be some minor mistakes. The tables have the same style as Duolingo's. Here's the dative case table: 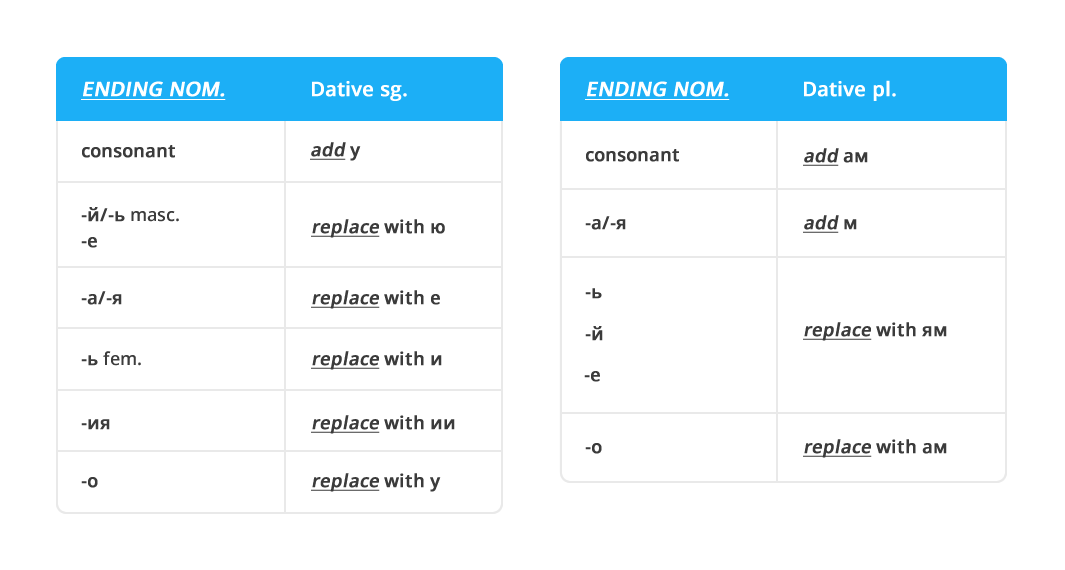 These look really good, thanks for making these. They look similar to my cheat-sheet that I carry everywhere with the formation of the accusative/dative/genitive/prepositive. Yours are way easier to read than my handwriting.

The only thing that I needed to add to my own for the Dative Plural was that if a word ended in гь, кь, хь, жь, чь, шь, щь, ць, the ending would drop the ь and end in -ам to comply with spelling rules which dictate that a я may not follow any of those 8 letters. Not that there are necessarily many words (which I am acquainted with) that end with some of those combinations - I just had to reinforce that spelling rule for myself. :)

Happy that you like them! It was frustrating to switch between several websites and notes to find the case endings, so I decided to make the case tables on my own. Here are the genitive, prepositional and accusative tables(for a larger size right click and view image, they are separate images though): 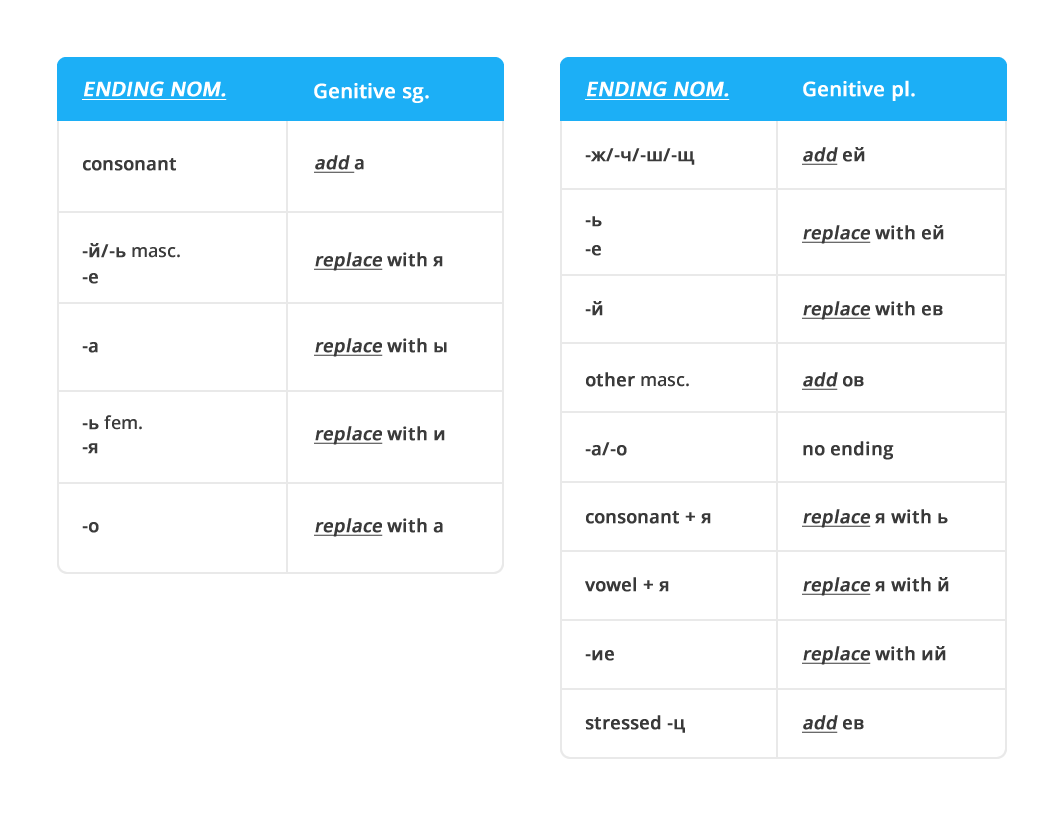 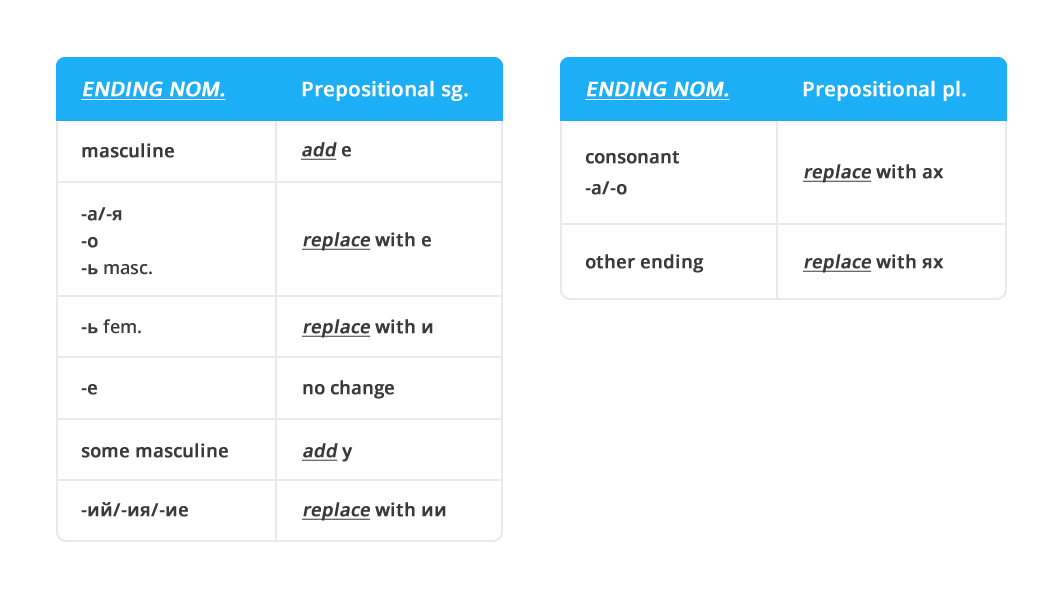 Duolingo already provided a good nominative case table, but I can upload my version as well. The instrumental case table is not yet available, I will make one when I study the duolingo instrumental case lesson and upload it here. When you find some errors or have some additions, please let me know and I will edit them. The spelling rules are not included as you mentioned, as I try to memorize them:) 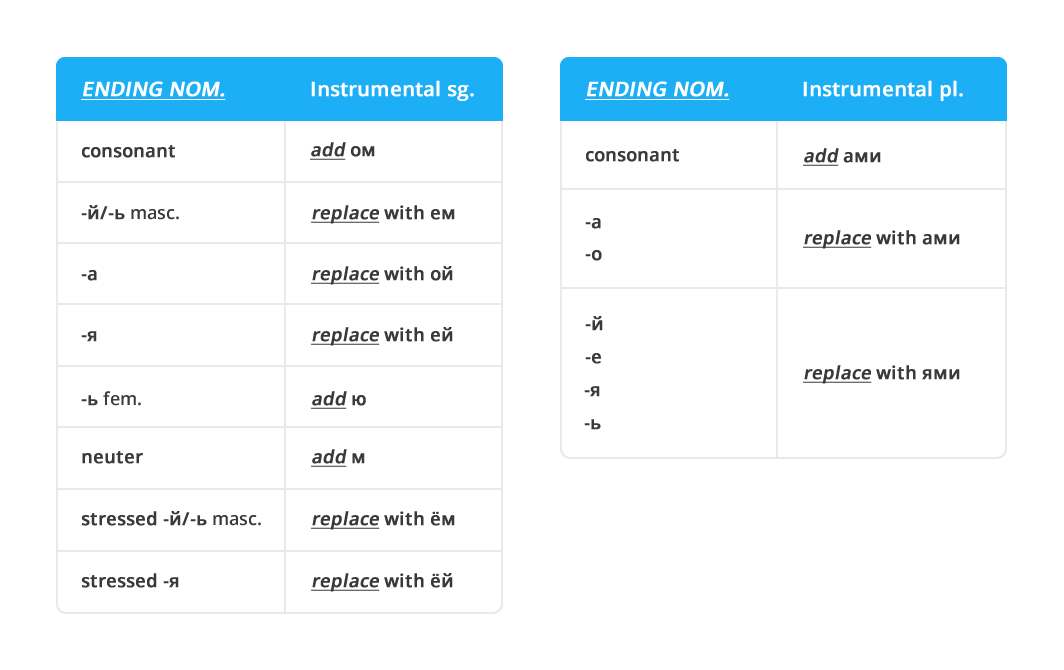 The only things I have questions on are:

Accusative Singular. You mention animate consonant ending but do not mention -ь masculine animate - this also will copy genitive singular. Maybe worth adding?

Genitive Plural. If it ends in -ц (stressed), add -ев. But I admit I am stabbing blindly at that one, because of all the stressed -ц words I know, most of them seem to be exceptions, and I understand that Genitive Plural has a large number of exceptions to its rather complex rules.

[Also (and you can ignore this paragraph if you want), I recently had to make an addition to my own Accusative list: -я is sometimes inanimate neuter, though most -я words are feminine. These exceptions will remain nominative and will not form Accusative Singular with -ю. Now, granted you have already mentioned that inanimate remains Nominative; but I had the hardest time not turning имя into имю in the Accusative, so I had to make my own entry for -я neuter words, just to keep me on the lookout for other exceptions.]

I too have not yet gotten to instrumental - we'll get there, friend.

You're right, thank very much for your additions. I've added the ь masculine animate and stressed ц to the tables.

I used http://wordhelp.ru/end/%D1%86 to find words ending in ц and found a couple of them like герц(hertz) and шлиц(slot) that both end in ев in genitive plural. This website is also handy(got it from someone else on duo), insert a word here and you'll find all it's endings by case and sg. pl.: https://www.multitran.ru/c/m.exe?a=118&

Yes, the genitive plural is very complex. The table took me more time to make than the others. There's also a rule that one syllable words that end in й take ёв like край and буй(buoy), but when you look up чай it seems to have a different ending (ев). Also for example the word рай(paradise), which doesn't change in genitive plural. So there also seem to be different exceptions here. I'm still hesitating to add this one in, maybe later on.

Haha, I ran into the same problems with имя. Which is why I use an online dictionary (lingvo live) that shows gender and also stress.

I have been looking for a website like wordhelp.ru - just didn't know what to search for! Thank you so much for that. I do question whether multitran.ru is correct on its genitive plural ending for чай - the only reason I say is that OpenRussian.org and ru.Wiktionary.org both list genitive plural as чаёв, not чаев.

Thanks for these great links.

Genitive plural may just do me in! :)

Thanks for the tables. :)

Thanks for the tables! Very helpful

Here, have a table of all the case conjugations of all nouns: http://www.russianlessons.net/forum/viewtopic.php?t=898 (except for a few exceptional nouns)

Thanks. I have to say though: it takes a lot of effort to make something as unpleasant to the eye as these tables (in terms of graphic design)…

I know, I even made a new one for that reason, but I don't know how to upload it

you will find info about inserting images on duolingo here: https://www.duolingo.com/comment/2591660

There are even some more useful tables under that, in the same page

I guess "идти" being an infinitive without the usual -ть ending is an exception right?

Yes.
идти is about the momentary action. It has a perfective pair пойти.
There is also ходить for iterative actions.

There are a few verbs that end in ти, though many derive from идти. It has to do with the ending being stressed rather than the stem, if I remember right. There are also a few that end in чь, like помочь.

пора is pronounciated in a wrong way. The second syllable must be emphasized, not the first one.

Yes, should be accepted as well.

The female voice also pronounces it wrong consistently. I have been reporting it each time...

Please порА nit пОра! There are far too many stress mistakes in this course.

On this link you'll find DL's nominative table: https://www.duolingo.com/skill/ru/Plurals/tips-and-notes My table is almost the same as this one, but if you still insist, I will upload my own:) I'm happy that you like my tables. Be careful though, the spelling rules and exceptions are not added to my tables, but they should work fine for the majority of words.

Thank you very much Daan, have a lingot

As a native speaker it is so frustrating to have correct English marked wrong. DL's English grammar is incorrect so many times; it's difficult to predict which clumsy version DL is preferring each time.

Could своим work here instead of моим?

Not under any circumstances! Своим is only used when the subject and the object are the same, so when I have something that belongs to myself, you have sth that belongs to yourself etc. In this sentence, you only have one of those (impersonal "пора" = it's time and logical subject in Dative, "Моим родителям"). Родители гладят на своих сынов (they look at what's theirs) would employ свой, as shown.

This is not a question about Russian, it's about English language: is "it's time to go to work for my parents", in this order, wrong? Is it important the order in the english sentence?

It is grammatically OK, but it completely changes the meaning of the sentence: your sentence says that it is time for you (or whomever else this sentence is addressed to) to go and work for your parents. That is, you will do some work your parents.
The reason for this is that "to work for [somebody]"="to be employed by [somebody]" in English.

So is it пора that makes the dative case or is for my parents the indirect object. Little confused..

In this case you can think of the dative моим родителям as meaning "for my parents".

I put "My parents have to go to work now" which is I reckon is an accurate translation, but it wasn't allowed

It is now time... was marked incorrect which is plainly just as valid as putting now at the end of tbe sentence

The bigger issue is why you're adding "now" to the sentence at all.

You're right. I later realised that I had read "now" into the original Russian sentence.

anyone knows if i can omit идти in this example, whether or not duo allows it?

It should allow it. If not, report it. Another example by duo is извини, мне пора на работу.

It is fine, and it's accepted.

Идти is optional when talking about a destination. Пора [идти] на работу/в школу. It's time to go to work/school. We do similar in English too: it's time for work/school.

So yes, идти may be omitted here too.