75 Comments
This discussion is locked.

And I'm not afraid to use it

I don't understand what NadimRifai is talking about. Why is it a good reply?

It's a play on the phrase "I have a gun and I'm not afraid to use it." Which is kind of a classic line for people to say, and it might originally come from some old book or movie.

People like to play with it a lot though, as you see.

Shame on the people who down-voted a question!

Explanation please, i am one of the thick heads

I think that would be a reference to I have a gun and I'm not afraid to use it. Either that or Stephen King's Gunslinger series (before it totally jumps the shark). :)

why doesn't "I have the plate" work for this answer?

Same for me, i lost the last heart on this

This would be "Тарелка у меня", with different word order

Emphasis based on word order is how Russian language remedies the lack of definite articles? Is it the only way?

It is a German borrowing. Russian has a number of everyday words that have actually been borrowed from other languages. Most of them are not from English: by and large, only the very recent loanwords come from English (most of them related to technology, business and entertainment).

Interesting. Besides der Teller, from my smattering of Estonian (which may also have had German influence), that language has "taldrik" for plate.

I keep thinking of tapioca with this pronunciation of the Russian word though. X) Maybe it'll serve as a mnemonic...

And in Swedish it's tallrik ...

When they'r going to give it back?

Do some words not come from Old Norse? This was technically a Germanic language anyway though. Was just reading about the twisted paths between Slavic and Germanic languages some words have taken to get to modern Russian and German, such as the German word, knute, which came from Russian кнут, from Old East Slavic кнуть, which in turn came from Old Norse knútr, and I believe all of which mean something like whip or knotted cord.

I'm guessing it's a reluc from the time old Peter imported Germans...?

That is so cool! It makes sense though. A lot of language borrow from their neighbors. Not only does it fill a gap, borrowing creates an overlap between countries that helps with trading and diplomacy.

What is tallerken? And which language?

Bare У меня does not focus on the fact you really HAVE that thing, just specifying what it is. It is assumed that either it was obvious you have at least some kind of that thing ("I have dark hair")—or that the fact of possession is not as relevant right now as the identity of the object ("He's got a gun!")

The presense of есть (which is,effectively, "is") explicitly says that such an object exists. As such, it is not used to describe properties or quantities, even though in English "I have" can be easily used for these as well. For example, in "I have 4 sons" it is very likely that the number is the focus. In "I have dark hair" it is a given that you are either bald or do have some hair at least—so «есть» is not used in such situations.

Есть is also dropped when talking about illnesses ("I have an influenza/diarrhea/allergy...")

thank's for clarification , it means a lot :)

the russian "l" sound is more close to its pronunciation in spanish or portuguese than in english i think. it does have an "u" sound.

It's called the "dark L" in linguistics, I believe

If you say the word as you wrote it (with a vowel after e), the tongue doesn't touch the bottom of the mouth. So, maybe if you try speaking it with the tongue snapping down for the l, you'll hear it. That's a long shot, but all I can think of to help. Maybe the movement will somehow "connect" the hearing for you. If not, don't worry. It can take a few years to hear a few new sounds, but, sooner or later, you start hearing the new stuff :)

Isn't the accusative with y - тарелку ?

it is, but the plate is not in the accusative here. It's the subject of the sentence (literally "By me there's a plate"), so it's in the nominative case,

I have a question, I've translated this as "I have the plate." which it marked as incorrect. I thought about it a bit and maybe "Тарелка есть у меня" might be the correct translation for "I have the plate"?

"I have the plate" would be "тарелка у меня" without "есть". "Есть" is used when we are establishing the existence of something, while when we are talking about the plate it's existence is not in question.

"Тарелка есть у меня" is just an unusual word order, but it still means "I have a plate". I'd translate it as something like "I, for one, have a plate".

Ah of course :) I sort of knew this but while I was "rearranging" the word order I forgot to omit it. Спасибо! :)

how is u menya est translated (like each word)?

Thanks. I have got used to this expression, but did not understand it.

Whats the difference between Тарелка and посуда?

«Посуда» is a collective noun that encompasses containers used for cooking, consuming, and storing food.

This reminds me of the Ukrainian Посуд which I think means a collection of dishes, which one would be washing.

How would one pronounce plate

what type of plate? i dont think i get it. is it like a plank?

The kind of plate you eat off of

thank you so much!

In which case is the pronoun in this sentence?

It's in the genitive.

What is the difference among тарелка, пластина, and плита? How many words for plate do they need?

Тарелка is something you eat from.

Пластина is a thin object made of rigid material 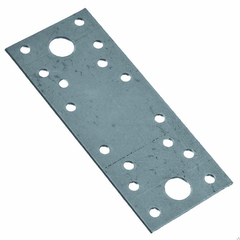 плита is a huge stone or metal slab. By analogy, it also means a range (the one you have in the kitchen). The only meaning where I think it can translate to "plate" is if you mean a tectonic plate or, I don't know, a layer of rock. License plates are none of the above; they are номерные знаки or simply номера ("numbers").

Why not тарелку? I think it's accusative...?

When you say:
У меня есть... then you always use a noun in a basic ( nominative) form

The slow and the fast version are pronounced differently

And if I want to say "I have MY plate", would that be "У меня есть мои тарелка" ?

It depends on what you mean but «У меня есть моя тарелка» would be rather odd in most circumstances. What is that you want to express, exactly?

And someone should ask you in Russian :)

Kumatangz wrote just above here: "why doesn't "I have the plate" work for this answer?" I keep getting it wrong when I use "the" in "у меня..." sentences.

What letter is making the "oh" sound in "тарелка"? Is recording saying it correctly?

I'm hearing an "oh" sound before the "ka", by reading it, it seems it should be "Tareeyairka".

It is the Russian L sound (somewhat similar to "l" in "real").

None of them makes this sound (no wonder, given that Russian does not have the "oh" diphthong" in the first place).

I wrote естс instead of есть by mistake and it was considered an mistake.........

If someone asks: "who has the plate?" this answer would be correct

If someone asks: "who has the plate?" the answer in Russian would be "тарелка у меня".

So "У меня есть тарелка." is used as a statement that I have a plate in my possesion (any plate), right?

Is there a way to mark a question apart by putting a "?" ?

The sentence without the "ectb", would it still mean the same?

It's written "тарелка" but in some recordings I hear "тарёка"

Lol why is it that I completely mispronounce a word and it still goes "yeah that was great" ? XD