Great sentence, I love it :D

Don't you think you could do with learning a few more languages?

Also the word "утка" means a portable toilet for patients(which can't stand or walk) in the hospital.

Huh. I had no idea. I guess that would be what we'd call a commode?

Commode? Do you mean a toilet seat? But a commode (комод) it is a dresser in russian. :)

Commode has several uses in English. This seems to be the meaning which would fit this usage of утка in a Russian hospital?

Not early. I saw a commode in a hospital.I think it is a "стульчак" .The утка is different from this. When patients don't seat (just lie)they can't use a commode. If the patient feels very ill, the nurses put diapers on him. Imagine a man who broke both legs. He'll be ashamed to pee in the diaper as the child. The утка is a solution for a delicate problem. I can't insert true image, I will send you a link in private. P.S. утка = суднО (the accent on the letter o// сУдно it is a ship:))) Thank you for conversation. Sorry for my mistakes.

Ahhh I see... I wonder if this is what we would call a bedpan?

edit: I just googled утка больница, and the images that pop up are indeed what I would call a bedpan in (British) English :) (I think it's the same in America, but I'm not certain!)

Margulya, you are right! And I was wrong. I checked in the dictionary. But all my life I said and heard суднО. Maybe both of these options are valid, but correct is сУдно. Thanks a lot! :))

We would call утка a bedpan in America.

No, that's what's called a bedpan.

Interestingly, in Poland we call it "kaczka" which also means a "duck", so it's the same in polish and russian.

Would be interesting to quack while using it...

In Portugal the name for that is "arrastadeira", referring to the way it is put under the patient.

And it can also mean fake news! 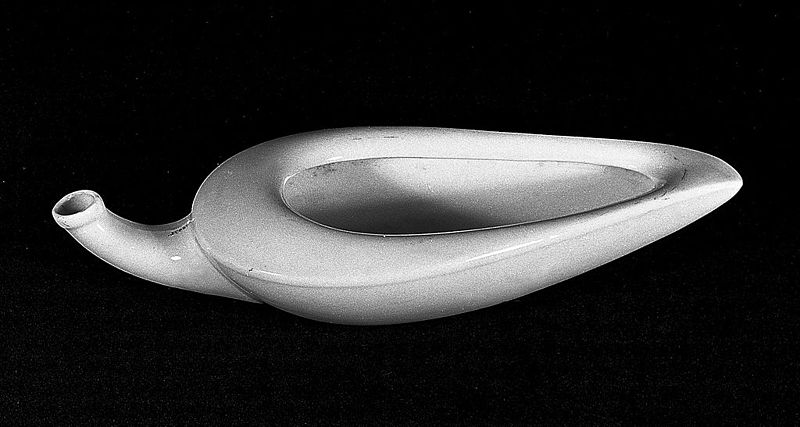 Give me duck or give me death!

how about "give me some duck?"

"Some duck" would require the genitive, but I'm not sure how those two competing cases would mix...

Kinda confused when to use мне and меня

Меня is the accusative or direct object, or the thing the verb is acting on. In English the easiest way to make sense of this is to think of a sentence like "I like you" or "You like me"; you can see how "I" becomes "me". In this sentence, it's the duck who's being acted upon, it is the direct object, it is being given so it goes into the accusative, from утка to утку.

Мне is the dative or indirect object, in English this would often, but not always, be translated as to me. This particular sentence could equally (and perhaps more helpfully, for the beginner) be translated as "Give the duck to me", it's just that with the word order as it stands, it's not necessary and sounds a little strange. ("Give to me the duck" sounds oddly formal.)

(Russian uses the dative in some places where we don't use the preposition to, but usually there's a sense of direction or movement towards in the verb, so it makes sense. For example, call me and write (to) me both take the dative.)

(Меня is also the genitive (of me) and мне is also the prepositional (always used with prepositions), so this explanation is imperfect, but I'm hoping it gives you something to hang on to.)

Thanks a lot. Changing the order of the sentence really helped me to understand why the duck is in the accusative case (утку). I really appreciate the time you spent to write the explanation :)

Your ducklings or your life!

....before this gets ugly

or things are going to get fowl...

Thanks all for the informative and sometimes extremely funny comments.

I wrote "give me some duck" and it was marked wrong. But "a" and "the" would seem to refer to a live animal. I was thiinking of a cooked dish, and it seems to me that "some" is appropriate in that context. Am I wrong?

I would think there would be a word to indicate some or possibly a use of the partitive if this was the intended meaning, but I'd defer to a native on that.

I want to see where this is going...

i don't give a duck

You can't handle the duck!

What would "Give me THE duck" be?

I think it would be the same, because Russian does not have articles (a, an, the). You have to decide for yourself where they would be in the sentence. Therefore, depending on the context, "daite mne utku" could mean "give me A duck" or "give me THE duck."

Why is "give me duck" correct. Is the "the" optional in English?

Sometimes we do not say it, for example if it is cooked (and not a pet) and you are ordering in a restaurant you might say “I’ll have duck.” This is much like how you could say “I’ll have soup,” or “I’ll have pasta,” without being specific. Those examples also allow for “the” to be more emphatic in sound. “I’ll have salad,” and “I’ll have the salad.” Both are correct.

"I want a new duck" by Weird Al: https://www.youtube.com/watch?v=3KvgQIBcdRk

The elites don't want you to know this, but the ducks at the parks are free; you can take them home!

Bring me the duck?

thankyou, i suppose a simple dictionary search would have answered my question. ;)

That's okay! The only stupid question is the one you don't ask for fear of looking stupid. Otherwise they're just chances to learn ;)

Принести is the perfective form. "Bring me the duck" would be "Принесите мне утку", I think.

With the disclaimer I haven't gone away and checked, that looks right to me. And phew, I haven't forgotten everything while doing Polish, it seems!

Why do we add the acusitive suffix to the now inanimate cooked duck? Isn't accusitive reservered for animate nouns?

Note also that the definition of animate or inanimate is attached to the word, not to the specific object. Even if we assume here that this specific duck is cooked and inanimate, "утка" is still an animate word. This doesn't have any impact on the singular forms, but it does in the plural where accusative matches genitive plural "уток" rather than nominative plural "утки".

Why not "give me that duck"?

Because there isn't a "that" in the Russian sentence.

How can you tell the difference between "give me THE duck" and "give me A duck"? They have different meanings...

I'm really confused with the russian endings. Like, I get that утке is kinda related to a location and утки is simply the plural, i guess. But when do i use утке and утка and which other endings exist?

What are you trying to do with the duck?

I have a problem with polite Russian speech. How do you distinguish a request from an order? Can Дайте мне утку. mean 'Could you give me a duck'? Is it necessary to add, eg. пожалуйста?

I thought that because Дайте мне is in the plural form it can be also polite speach. And because it's polite (when spoken to one person) I can translate it as a polite request ('Could you give me a duck') but Duo only acepted a blunt order ('Give me a duck').

"Give me some duck" was wrong, how would you say that?

if the duck is dead cause we eat it,isn't it inanimate? so "Утка"?

When i typed "i want duck", autocorrect changed a word.. It was very inappropriate!

Is that a threat?

What's the difference between "дай мне утку" and "дайте мне утку" is it that you are actually saying, "you give me duck" and that's why you need the "те" at the end?

You cannot tell me these sentences are reviewed by a human Duolingo employee. This is definitely randomly generated.

The dative is used for an indirect object, i.e. for the one who is being given something. In this case it's "мне". The thing that is given is a direct object and is in the accusative. "Дайте утке" would means "give (something) to the duck".