65 Comments
This discussion is locked.

Questioning existence of children, есть is required. I think I get it.

that is what i thought too

So why are there two different words for child and children (plural)? Is it just a quirk? I would expect the plural of children to be робёноки (children) or something, or maybe the singular of this version of children to be дет or деть (child).

I'm just curious, can I use either or? Or how does this work?

No reason, really. It is called suppletion. The phenomenon is found in many languages. For example, in English "went" works as the past tense of "go", and "people" effectively works as a plural of "person" (whereas "persons" enjoys limited use).

«Дитя» is rarely used these days unless you go for high style—but its plural is used as a de facto plural of «ребёнок».

«Ребята» is the plural you might use when talking about boys or addressing a group of kids to tell them something.

Fortunately "ест" would make no sense here. Now if someone asks you "ты ешь детей?" you should be worried.

why "do you have kids?" is wrong? why "any" is needed here? (and sorry for bad english)

I think it's fine, actually.

Yeah, but it probably should be accepted. That said, "do you have any kids" is what you would most likely hear from a native speaker.

I have lived in Pennsylvania for 49 years. We say, "Do you have children?" or "Do you have kids?" all the time. I don't see any Russian word signaling that "any" is necessary. У тебя есть дети? seems pretty straightforward.

okay, i will try to remember that. thank you!

I live in Pennsylvania. I've lived her 49 years.

You mean I live here

I have lived in Pennsylvania for 49 years. We say, "Do you have children?" or "Do you have kids?" all the time. Sometimes we even say, "You got kids?" but that is slang. I don't see any Russian word signaling that "any" is necessary in this sentence. У тебя есть дети? seems pretty straightforward. But if I don't add "any" I lose a heart. O_o

It should be accepted without "any" but ok...

What is wrong with Do you have children? I would think children is synonymous with kids.

Не is used to negate a verb or a specific word in a sentence, so "у меня не дети" means that what you have is "not children".

Нет кого/чего? Детей. So genitive case is used. That is how native russians learn cases, not sure it would help others though.

ive found the app lingvist is really useful for learning cases.. its like fill in the blanks. it tells you what case its expecting, and if you type the wrong one it shows you a table of all the diff declensions for single/plural/perfective/gender etc... unfortunately its limited to only 80 cards/day w/o premium or something

"Do you have children" is still right!!!

Correct. Both as a single polite form and when addressing to one person but meaning his/her family by "вы".

I absolutely love losing a heart over "Do you have children?". I am here to learn Russian, not English. As a non-native English speaker, I do acknowledge that I still have things to learn in English, but I am here, once again, to learn RUSSIAN.

Why does:" Do you have children?" Doesnt work?

Where is the stress in дети?

On the e. Useful tip: Plug the word in question in here: http://starling.rinet.ru/cgi-bin/morphque.cgi?flags=endnnnnp

It will show all the forms of the word and the stress. Always read the entire table and you'll start to figure out the rules.

Thanks! I'll have to bookmark that site. :-)

Thanks, Theron! I've bookmarked it as well. :)

Why is 'any' necessary

KIDS IS A SLANG TERM Polite speech says "Do you have children?" That answer should be accepted in priority to a term using kids.

The translation showed to me: They will be back in one hour - this is obviously wrong ☺

I had it right but it marked me wrong!

"Ребята" means something like "guys", not "children". I guess it might serve as a peculiar way to ask about children, but it's not idiomatic at all.

Is it possible to translate this as, "Do you have a child?"

No, because "дети" is plural. If you wanted to ask "Do you have a child?", you'd say "У тебя есть ребёнок?"

Thank you - I hadn't realized it was plural.

You're welcome! Yes, those are some of those unhelpful words that the plurals don't look at all like you would expect them to.

у тебя есть дети what is wrong on this sentence?

Nothing, that should work.

Can you say "ты/вы есть дети?" or would that be considered rude?

It is a preposition ("at'). Literally, this structure is more or less "At you, there are kids"

"у тебя есть детей" is correct as well but what is the difference between дети x детей? 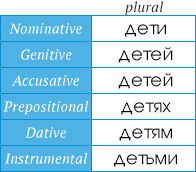 Now it's wrong without the addition of 'any'? I swear I've put that in over and over and had it be correct without saying 'any children'

The door-to-door salesman trying a more direct approach this time.

I put "do you have children" and it denied my answer, seems a bit stupid since sometimes it accepts children for дети except for now, the words are literally interchangeable in English so I don't understand what's going on here...

I wrote children and it was wrong. It said that kids is right. Like are you kidding me?

The problem isn't with your understanding of the Russian. It is how you use English.

Do you see any difference between how the words kids and children are used in English? If so, then recognize that Duo is telling you the same difference exists in Russian.

What is the difference? We accept both.

Are you saying Russian doesn't have a way to distinguish between children and kids? Good to know because English definitely does.

So, what is the difference?

Children is a formal term indicating respect for the legal status if nothing else of children. It invokes societies view of children being essential to society and in need of protection.

You will never see a legal document, legislation, policy statement or government form refer to kids. It might contain kids in the title but in the document itself it will always refer to child/children.

Kids is informal. It actually stems from the similarity of behavior and movement of young goats and young humans. The actual name for an infant goat is kid which was subsequently applied to very young people. The obvious joy infant goats and young humans shown in using their developing bodies is invoked by the term kids. It is a casual way of referring to children and is often intended to express affection. It is often applied to one's own children regardless of their age.

It can also be used in a negative manner because of the sometimes tiresome nature of kid behavior. I worked for several years for an extremely wealthy person who was one hundred years old and came into the office every day. Sometimes people would come into the office and make a presentation to him. Often, after they left he would turn to me and say.......damn kids, think they can come in here and put one over on me..... The person might be a moderately successful businessman forty of fifty years old. But he would never have described them as ....damn children.... because they clearly weren't children.

It is safe to say that the more recently an English speaker is to having had the status of child/kid the more likely they are to ignore the difference between child and kid.

Thanks for your answer! No, Russian doesn't have this distinction.