45 Comments
This discussion is locked.

Should "the rain is falling" be accepted?

I wrote that too and it was incorrect. I think it should be ok, but I'm not an English native speaker so ...

"The rain is falling" is a correct English sentence; however, it's a rather unusual and indirect way to say it, when all you really mean is: "It's raining". I do think "it's raining" is a more literal translation of the Russian. Apparently, there are no verbs for "to rain", or "to snow" in Russian, so in this case it's impossible to translate absolutely literally - there being no exact English equivalent ("It's doing rain", or "rain is going (on)" are clearly incorrect). The most natural translation is "it's raining". The Russian conveys no sense of falling, even though we know rain (and snow) does fall. So if you want to stick strictly to the information given, and not introduce nuances that aren't there: "It's raining" is the best translation.

There is a verb for "to rain" in Russian - "дожди́т", but it is used for prolonged rain, incessant rain, thus, it has a somewhat different meaning.

Thank you! In that case, "The rain is falling", or, especially: "The rain is still falling" might be a more appropriate translation for that one, as it does convey a sense that it's ongoing.

"The rain is falling" and "it is raining" are more appropriate for both "дождит" and "идёт дождь" because "the rain is still falling" or "it is still raining" translated as "дождь всё ещё идёт". All these sentences mean ongoing action.

"Прошлую неделю дождило" - "last week it was raining" means in Russian "last week there were a lot of rainy days and the rains were long".

Thank you Tina, your explanation helped make it clear . We won't get all Shakespearean next time someone asks what is the weather like :)

:)) Exactly - both perfectly correct English. Only the mood is different.

As a native English speaker I actually found the "going" construction very helpful. The idea of the "rain going" makes sense to me, but that could be because I'm Gen X and we frequently reduce things down to "make the thing go" in an ironic sense, so simply removing the irony from that construction isn't much of a jump.

Is this an okay way of thinking about it?

"It's going to rain" - it means "it will be raining" in Russian:

3) Дождь собирается (a brief statement is commonly-used in Russian more often than the first sentence with "идти", it means the same)

Usually in Russian language in most sentences you can change the words in some places without loss of sense. All these sentences mean - "it will be raining" and the first four also mean - "it is going to rain"

On Tuesday it will be raining - Во вторник будет дождь.

The first four sentences can also be used to describe the rain on a certain day (e.g. when you watch the weather on a particular day), it's grammatically correct, but I rarely hear such use. 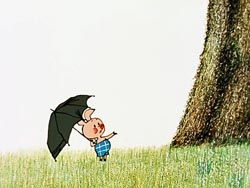 "going" and "going to" have different meanings in English. You have to be careful about adding the extra word.

I'm a native English speaker, and don't have trouble distinguishing between "going" and "going to". Back then (3 years ago), I had never met the set phrase "идёт дождь" before, but understood the individual words to mean: "going rain". As "going rain" is not a valid phrase in English, I guessed, wrongly as it turned out, that it might mean: "going to rain." I then wondered, out of curiosity, how you would say: "going to rain", and several people provided helpful replies. But it was never an issue of not understanding the difference.

video unavailable -- what is the title, pls?

I doubt the phrase exists in Russian, but if it did, wouldn't it have to be accusative? Идёт дождь мужчин.

Actually, according to a translation of the song, it would be expressed as Это дождь из мужчин. (It's a rain of men.)

Can anyone give a literal translation for this expression?

What is the negative form of that sentence (It is not raining)? Is it just "Не идёт дожль"?

Is there anywhere I could listen to the difference between a word with ь and a word without it? For example, how would дождь sound without the ь? I don't really get that little thing :)

You can find recordings on forvo.com. You won't find дожд, but you can find other words with and without.

There are good ones on YouTube. Here is the first episode of a trilogy that I think does a really good job on pretty much the gamut of Russian phonetics: https://www.youtube.com/watch?v=x1CGGAIGV-U

Very grateful for the quick and good answers guys!

I think part of the reason for this is because in Russian, the action ending "-ing" isn't a thing in Russian. If we said, "это дождь", that would just be naming an object. So the only thing that would make sense to me, in that situation, if I were ancient Russian, would be to descibe it as in transit, ergo "Идёт". "The rain is going", because you know the only place has to go is down. "Going" in this form is obviously not loose as English: where as we could also say it is going to rain, which isn't directional at all in this sense. "In transit rain", "Rain in transit", since word order never stiffened in Russian thanks to its many word endings, unlike English when we lost the Latin word inflection system, and then stiffened to noun first then verb.

So 'дождь' is a noun and means rain? Is this right?

Is it also OK in Russian to change the word order ( rain goes )?

Should not it be "The rain is coming"?

Does дождь идёт sounds natural or only the идёт дождь

It's a terrible day for rain

Why do I have to keep repeating this lesson after completing it without advancing to the next one!!?

This lesson never shows completed even though I did!!

Why is идёт used here instead of эта? Is it because the rain is in motion, i.e.: going somewhere?

You can't use это because дождь is a noun. Это дождь would be "This is rain". And yes you're right the rain is "going", it's going down towards the earth. Although in English we would more likely say "Rain is falling".