Translation:Even though they are all great writers, your student does not know them.

63 Comments
This discussion is locked.

What's the role of и in this sentence?

In the "tips and notes" for conjunctions, хотя is described as:

Much like the English though/even though/although. It is often combined with "и" before the predicate (which is sometimes directly after «хотя»):

I can't tell you if there would be any difference in meaning or emphasis without the "и" ... I'd be interested in knowing that too.

I'd say it sounds better and more effective as хотя ... и, though using just «хотя» is also possible (might sound more formal and bookish). I can probably conduct a search in Russian National Corpus to make a rough estimate of its frequency either way. Only, I'd rather do it later :)

As of now, Duolingo rejects the sentence is the И is missing :/

In the listening exercises, it expects you to type the exact sentence the voice reads.

Why is the translation of хотя as 'while' considered wrong. This makes no sense to me

But why И is after все and not before it ? In that position it seems a conjunction ( all and great writers)

As for the actual location of "и", I would say that "и" should always immediately precede the verb (or the leading "не" if the verb is negated):

What makes it a bit tricky in this exercise is the fact that the actual verb (are) is only implied in Russian. But if you see where the implied verb would actually go, that's where you should use "и".
In this example you can test this rule by using"являются" - a more formal explicit form of "are":
"Хотя они все и являются великими писателями (instrumental, as required by "являться"!), ваша ученица их не знает."

You perfectly got the problem (absence of the verb).Your answer is very clear. Here "они все" is the subject

"И" simply emphases the contrast between the two clauses of the sentence. I serves the same purposes as "even though" as opposed to just "although".

You know, 'tips and notes' are unavailable to smartphone users. There's an old bug report about that.

Every Smartphone has a Browser and is thereby equipped to read the tips.

I do the exercises in the app and switch to my browser to read the tips. That's eben more convenient than in the app, because you can look at them while doing the exercises. In the app, it would (probably) be either or.

The "tips and notes" are not available to those of us working on "crowns." I did several other languages after going through the Russian tree twice. Now I am back reviewing Russian. Occasionally I would like to refresh my memory using the tips and notes, but there seems to be no access..

You can access all the tips and notes by visiting your progress page at www.duome.eu (for you I guess that would be www.duome.eu/alkajugl/progress ) In the list of lessons, click on the light-bulb icons at the right to see tips and notes.

Or just go to the website on the phone

There's yet another duolingo site you only find out about in a forum post? Really, duolingo?

Can you show me where you found "tips and notes" for conjunctions ?

If Russian from English is your current course you can link to the original.
Otherwise a copy can be found at Duome.

This kind of exercise where you only fill the blanks is completely useless! There is no translation afterwards so we only guess the right word and dont have a clue sometimes what the sentence means

Pay attention to whether the adjective (I assume, in this sentence) is modifying a masculine, feminine, neuter, etc noun. That's what you're being tested on.

This only applies to smartphone-apps. You can see the translation if you use duolingo on a pc.

Yea after enough time failing those random fill in the blanks you actually just start memorizing the correct answers and not learning why it is correct. They just need a skip button on them perhaps for the mobile users...

Why have an incomplete app?

At least the Android application has translations for questions in the discussion forum. It's annoying to require two taps to see it and dismiss it, but it's available.

If you look at the discussion afterwards, there is a translation. Sometimes, though, there is no discussion.

The translation is here in the forum. Just one single click away...

Please add a translation to this sentence

This is the (correct) translation I see in the browser window: "Even though they are all great writers, your student does not know them". Are you using a mobile version of DL?

Yes, I'm using a mobile version and there is no translation for some phrases. This was one of them. Thanks

Even here in the associated forum post? For me, it's just one click away in the app.

Maybe it's just me, but trying to transcribe this from just hearing the voice is possibly the most difficult Russian lessons I have done. Agh

I get stuck on this one because I think I hear писатиле where it should be писатели. Drives me crazy....

That's because of Russian pronunciation (vowel reduction): unstressed е and и sound exactly (or almost) the same as pronounced by many speakers in standard dialects. You need to rely on context: as far as I am aware, "писатиле" is not a word (if there is such word it is probably quite obscure).

Why isn't "although" an accepted translation for "хотя"?

Why is "Even though they all are great writers, your student doesn't know them" incorrect?

I said although instead of even though and it was counted as wrong. That is rediculous. I reported it but in the Russian lessons I think they ignore the reports.

I thought «и» always comes close behind «хотя». But it seems not. In what kind of situations are «хотя» and «и» separated?

No, that's not correct. "И" should come right in front of the word (or a compound object - like "великие писатели" in this case) which is being contrasted. If it is some feature of a subject that you want to contrast, then "и" is almost guaranteed to follow that subject, and not "хотя":
Хотя машина и новая, она часто ломается - even though the car is new, it breaks down frequently.

I don't understand the "все и великие" construction here. It seems to be saying "they are all and great". But that can't be what it actually means, it makes no sense.

Can anyone shed light on this construct?

Read in detail about хотя...и construction in this pic: 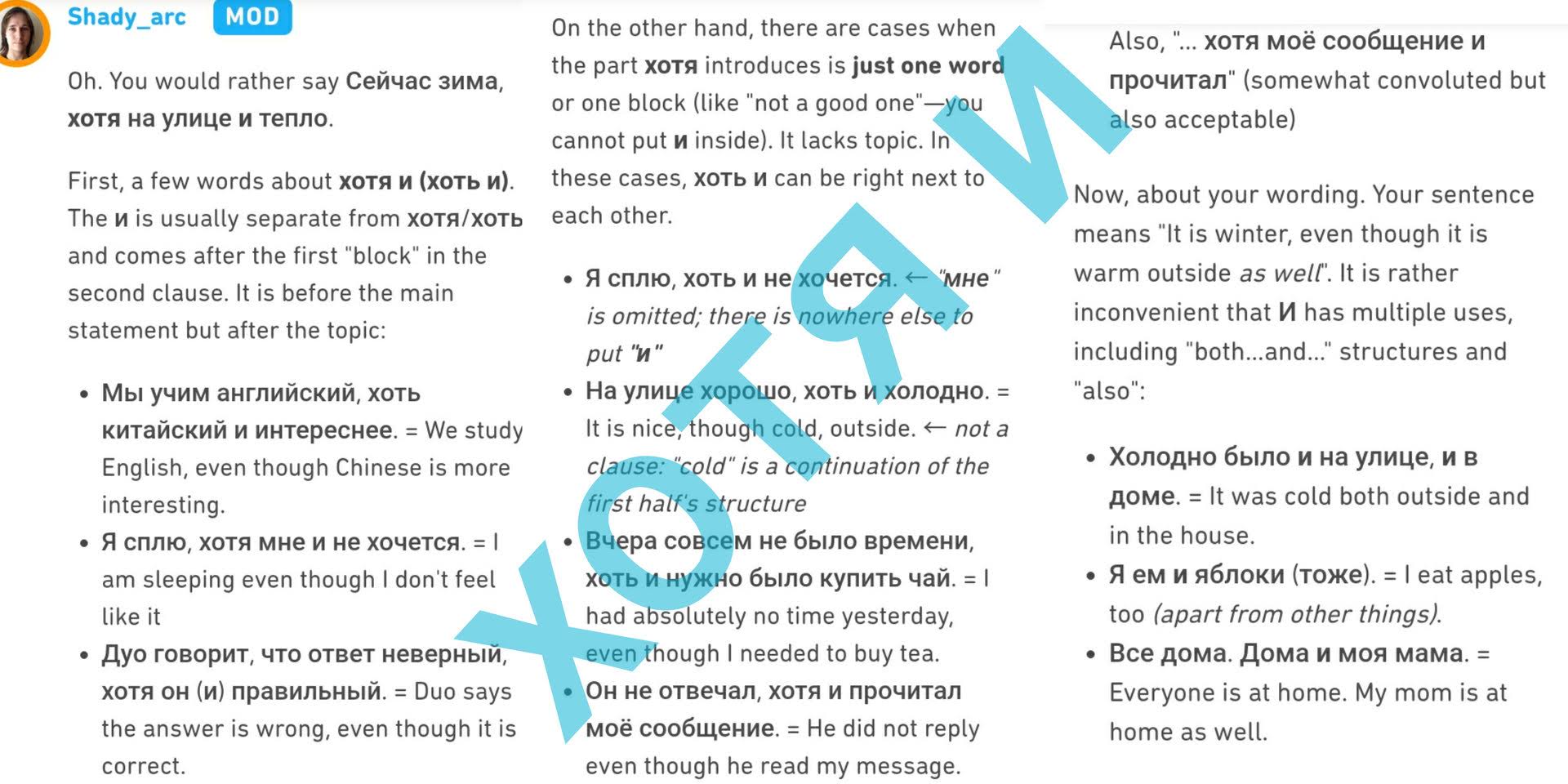 In turtle mode, the audio cuts out at the end of "писатели". Makes it hard for the type-what-you-hear exercise.

I seen Danny Kay name every Russian writer you ever thought of thinking about!

Copied the solution and it is still considered wrong - ???

see zirkul's comment earlier in the forum on the use of хотя и. As I understand it, и is used before the word being emphasized. Even though they are all GREAT writers = Хотя они все и великие писатели. и is not being used to mean "and" here. It is a fixed expression meaning even though. I am wondering if it is possible to put и before все .

Is this a mark on the student or on the teacher?

"While they are all great writers your pupil does not know them" - rejected. Could that be an alternative translation??

Why not "they all are great writers?''

doesn't and does not - same meaning

I thought их meant "their" and них was "them"

It is not so simple. "their" is only one meaning of их. It is also the genitive form of они (which happens to be written as них after prepositions, probably for ease of pronunciation). And the accusative form for animated nouns (as the accusative looks like the genitive for animated nouns, like the nominative for in-animated ones, and feminine-singular have their specific "-у" form).

Here, их is used as the accusative because писатели is an animated noun. "They" are the direct object for the verb "to (not) know".

An example where you can see их used as the genitive is in the phrase "много их", literally "a lot of them". It is их instead of они because много requires genitive.

So really, их and них are basically the same word, них is used after a preposition (when not in the "their" meaning). их can mean "their", "them", "of them" depending on the exact context (maybe some other option too).

To emphasize that них is not used for the "their" meaning, compare:

В их комнате. "In their room."