Translation:What is the moose drinking?

30 Comments
This discussion is locked.

I translated it like "what is drinking the moose?" And it said that it is wrong... why tho? Its not the same thing as "what is the moose drinking?"?

Are elk and moose the same animal?

In the Norwegian fauna, you'll only find what Americans would call moose, and Brits call elk, so that is the animal Norwegians would associate with both words.

The Norwegian word for the American definition of elk is either "wapiti" or "elk", but most Norwegians wouldn't know exactly what species it was and just call it a "hjort" (deer).

A while back, I saw a reference to "en wapitihjort" for the animal native to North America, to which we refer as elk and/or wapiti.

And for the die-hard moose enthusiasts:
Because moose names are extremely similar in many different Algonquian languages (e.g., moz in Abenaki, mus in Maliseet, mooz in Ojibwe, mos in Mohegan), the origin is not attributed to one specific First Nation language.

Possibly also worth mentioning that the wapiti (N.A. Elk/cervus canadensis) is closely related to the European Red Deer (cervus elaphus). For a time they were thought to be the same species, but gene sequencing has indicated that they are not.

In other deer-related news, "caribou" is the same species as "reindeer".

A couple of chromosomes is a hell of a big difference. Do you mean a couple of genes?

What is wrong with 'what does a moose drink'

Your sentence would be, "Hva drikker en elg?"

So if there was a drink called "Moose" (like say a brand or something) could you also use this to ask "What drinks moose?"

Though I suppose it would be more likely to be Hvem... but I suppose I'm more asking if there's a difference between "What is the x drinking" and "What drinks x"

You could say, "Hvem er det som drikker Moose?"
(Who is it that drinks Moose?) 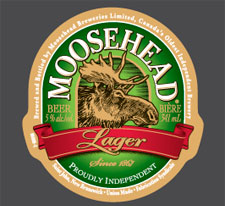 Forget "why do we exist", this is the new philosophical question!

how do i say "what is drinking the moose?" tusen takk

"What the moose drinks?" could be a possible answer?

English has different grammar for present habitual (things that are typical or common) and present progressive (something happening right now). So "I run" means that running is something I do regularly, while "I am running" is something I am doing right now. This isn't especially common in Germanic languages, by the way, though it's certainly possible to communicate this difference.

According to John McWhorter (a linguistics professor at Columbia), there's a good chance that this kind of "meaningless 'do'" is a result of historical close contact with Celtic-speaking peoples, since that same feature shows up there.

why pronunciation is different: in "elg" L is silent, and in 'elgen" L sounds L?

The 'l' should be audible in both the singular and the plural forms.

It shouldn't. Like my dialect, halfway removed from any booklike resemblance, I use a thick L and softening the G into a J, [æł̣j], and I keep that in the other forms that starts with elg as well, also when making it into a verb or compounding it.

aha! ok. Could you tell me more about yourself please - what is your dialect?

I'm from Skien, the county capital (fylkeshovedstaden) of Telemark. Telemark is otherwise known to have nynorsk close dialects in the rural areas (saying ikkje rather than ikke, eg rather than jeg), but the area around the bigger cities in the South, Skien and Porsgrunn, is called Grenland. Our dialect is superficially close to bokmål. We write bokmål.

Our dialect is called grenlandsk (after the area) and can shortly be described as bokmål with nynorsk vowels and endings. En bil, bil'n, bilær, bilane (car - cars), endings not to be mistaken for those long pronounced æ's from the East side of the Oslofjord, it's a rather short æ/bordering a. Lots of diphtongs (bli - blei (to become)), thick L's (melk - mjæł̣k (milk)). If there is an optional spelling of a word that contain an a, we probably use it. In plural nouns definitive we often substitute the -ene with -a, like smørbrødene - smørbrø'a (the sandwiches), ungene (the children), stays that way (I don't know the "rule" behind that). Some of the past tenses get an i, Jeg har sitti og skrivd lenge. (Jeg har sittet og skrevet lenge). [No pun]. I have been (sitting and) writing for a long time.

A lot of these characteristics can also be found in a lot of the other dialects around the Oslofjord, it's always the total collection of the sounds, rythm and endings that pinpoints a dialect.

Thank you very much, Grydolva It is very interesting to know how norsk differs from district to district. I haven't yet been to Skien, but visited Oslo and Bergen several times and of course I love Norge very much. Thank you for your detailed explanation and replies. I also share with you my lingot)

Whats is the difference between Elg and Elgen or the specific case for the usage of each word?

Norsk uses a suffix where English uses a definite article.

What are the specificatios to use either "elg" or "elgen"?

who let the dogs out? ;dajflkds