The origins of the Russian alphabet

(See the description below)

The Phoenician alphabet is a writing system that was widely used on the territory of modern Lebanon in around 1500 BC. It later spread across the whole Mediterranean.

Inscription on a stone in the wall of an ancient building from Tel Zayit (south of Jerusalem). X BC

The Greeks adopted the Phoenician alphabet in around 800 BC.

The Romans used the Greek letters to develop their own Latin alphabet in around 700 BC.

Dedication to Hercules, Rome. 217 BC

The Glagolitic script was invented by brothers Cyril and Methodius in 863 for writing Greek religious texts. It is the oldest Slavic alphabet. 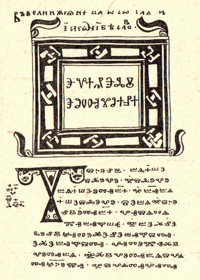 Later in 890s, the students of Cyril and Methodius developed the new Cyrillic script based on the Greek alphabet with addition of some Glagolitic characters for sounds not found in Greek. This script is the basis of many modern Slavic and Asian writing systems including Russian.

Cyril and Methodius invented the Glagolitic script because they needed it to translate the Bible and other sacred texts from Greek to Old Church Slavonic, as part of Christianisation of the Slavs.

Before that, in areas populated by Slavs religious service was held in Greek or Latin, which ordinary people did not understand. Brothers Cyril and Methodius, of Greek and Slavic origin, were commissioned to record Slavic language, so that the liturgy could be conducted in a way that everyone could comprehend.

After creating the Glagolitic alphabet, Cyril and Methodius first went to Great Moravia (modern day Czech Republic) to teach Christianity in Old Slavonic. (In the IXth century, all the Slavic peoples still spoke a single language, although with different dialects.) However, after their death, their work was destroyed, the German clergy returned to liturgy in Latin and the disciples of the two brothers were exiled.

At that time, in Bulgaria reigned Boris I - a very clever tsar of a then powerful country. He converted Bulgaria to Orthodox Christianity in the IXth century and made Bulgaria an important cultural centre. He established Preslav Literary School (academy), which soon became one of the most respected on the Balkans and among the Slavs. Bulgaria was predominantly Slavic country and tsar Boris I saw the cultural and political need for a script suitable for the Slavic language. For all these reasons, after the death of the two brothers, he invited their disciples to continue their work in Bulgaria.

Cyrillic alphabet was invented in Preslav Literary School, in the First Bulgarian Empire, at the end of the IXth century, by the disciples of Cyril and Methodius - St Kliment of Ochrid, Naum of Preslav and Angelarius. They developed the Cyrillic script, almost as we know it, and translated in it a vast number of books. Many new original books were also written in Cyrillic in Preslav Literary School.

Why did the disciples had to develop a new alphabet and did not just use the Glagolitic script? Many of the books written in Glagolitic had been destroyed. They had to start anew and books were written by hand, so this was a lot of work. Glagolitic script was a bit complicated and unusual. In Preslav Literary School, the disciples worked along with other learned men, who were already used to writing in Greek. To combine the Greek letters with new letters only for the specific Slavic sounds, seemed like an elegant solution. It made writing simpler, quicker and less prone to mistakes. It also made the new script easier to read. Even though the Glagolitic script was abandoned, the work of Cyril and Methodius was still very important, because it helped to identify the specific sounds of the Slavonic speech and thus made possible creating the perfect alphabet for it.

Cyrillic writing was first accepted as official in Bulgaria, then it moved to other states.

In the Xth century, Russian prince Vladimir the Great chose Orthodox faith as the most suitable for his people and converted Russia to Christianity. The fact that the ecclesiastical books were already translated into Old Slavonic, which was very close to Russian speech in those days, came very handy. Cyrillic alphabet was accepted, through the church, and then spread to administrative and state documents.

Bulgarians are very proud of the origins of the Cyrillic script and the day of Saints Cyril and Methodius is a national holiday, celebrating Slavic alphabet, literacy and culture.

The modern alphabet was formed in 1918, when І і, Ѣ ѣ, Ѳ ѳ and Ѵ ѵ were excluded and Ё ё, Й й were added. Also, in the old Russian the 4 characters named "yus" defined nasal sounds, which are not found in the modern phonetics of Russian language.

That's a cool overview. For me it was interesting to find out that the Phoenician alphabet is a one-to-one match to Hebrew. Even the letter names are 95% the same.

I didn't mention the Hebrew, Arabic and Etruscan alphabets because they are not related to Cyrillic.

Arabic and Hebrew are semitic languages while Etruscan was influenced by phoenician and ancient greek, as it happened in the case of latin

mate , the phoenician alphabet came from the north semitic alphabet

Thank you so much for sharing! Very interesting.

Fascinating research. Thank you for sharing!

nice to see how russian, my favourite language originates from greek, my mother language