Since "The Rhyme" is pretty much everything with Dr. Seuss, maybe a good Norwegian version would be this: 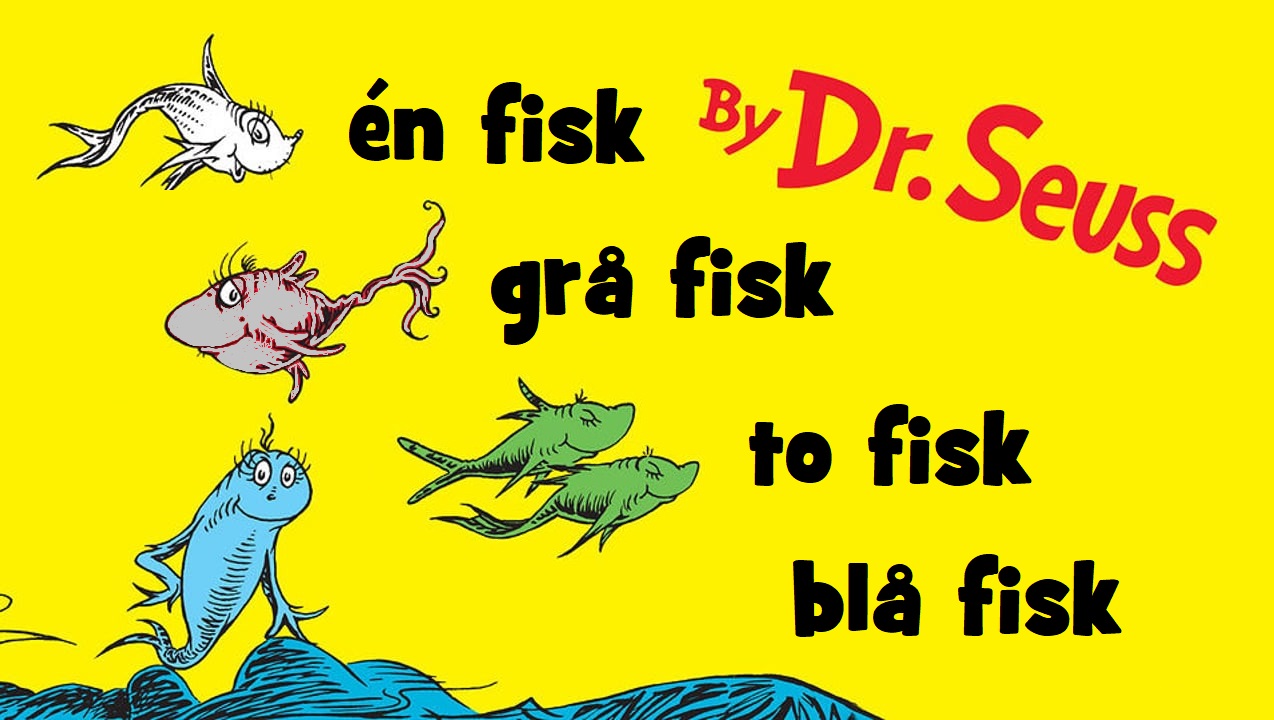 Shouldn't it be "to fisker"?

Either works. Please see my response to CanLiang below.

When does the e in "en" need an accent as shown here. Pretty sure this is the first time I've encountered that.

When "én" replaces the number "one", it often gets the accent added, especially if there's a reason to stress the number. The accent is still optional.

When "en" functions as an indefinite article, it's never accented.

what is the difference between en and ett

Is this a common phrase or in a sort common pattern, like as a sort of rhyme?

To me, it seems the colors are not in their proper form (indefinite neuter), and as Koala Kong wrote, the second ''fisk'' is also not in its plural form.

It's a rhyme, and the name of a Dr. Seuss book (see the image up top).

The adjectives are in their correct form, indefinite m/f, to match up with the noun "fisk". The neuter forms of the adjectives would be "rødt" and "blått" respectively.

"Fisk" works much like "fish" in English, in that the singular form is often used in a plural sense. "Fisker" would only be a strongly preferred plural in cases where each individual fish was in focus. When using it strictly as a mass noun, "fisk" would be preferred, and in all other contexts you have two options.

Since fisk might be the plural sense, could we also say "røde fisk, blåe fisk" here? (from the book cover illustration, these phrases appear to be labeling a single red fish and a single blue fish, but I mean, in the absence of an illustration, might we use the plural forms...?)

Interesting... in English, the rule I usually see is that one says "fishes" when referring to different species of fish. I don't think the distinction that you make, in which "each individual fish is in focus", would have occurred to me as a use of the English word "fishes", but it does sort of make sense in that context.

That said, as you point out, using "fishes" as a plural in English does not sound stilted or archaic or weird. It's just less common than using "fish" as a plural.

Back to my previous point, though: is the use of "fisker" also preferred when talking about different species of fish?