Translation:She is eating a sandwich.

Interestingly, it seems that "smør" means "butter", so "smørbrød" can be thought of as "butter bread", which is a very nice way of thinking about it as nearly everyone puts butter (or similar) in their bread!

Yes, "smør" means butter. "å smøre" means "to smear" and that is exactly what you when you prepare sandwiches.

Why is it called an open-faced sandwich and not just sandwich?

Norwegian open-faced sandwiches are delectable works of art. Here's an example of a few: 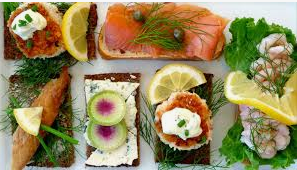 Would be nice to know how to access a keyboard with the Norwegian letters.... Can only write brod or somebody.

You can with a regular keyboard. Just hold down the Alt key and press any of the number combinations listed on the following site with your number pad: http://symbolcodes.tlt.psu.edu/accents/codealt.html

If you're on a smartphone; most I've encountered have it where you can access accented letters by holding down the letter until a list of accented versions of that letter pop-up.

Is it only continious? Can't it be just present simple?

Like many other European languages, the present simple tense and present continuous tense are merged.

Im have trouble doing the tongue rolls like in tge word sandwich, anyone have any tips?

I can provide some solace and tell you that the letter r is single rolled (alveolar flap) in Norwegian so you don't have to roll it too much. Nonetheless, being able to even begin rolling it can be hard for someone who isn't accustomed to it or who speaks a language where it's not part of standard phonology. After you master pronouncing this sound, some domestic cats might even confuse you with their furry pals due to its similarity to purring.

If your native language is indeed English, at least you will have no problems with the retroflex approximant ɻ (American-sounding r) which is used when r comes before d, t, s, n and l regardless whether it's touching them or not.

First, you need get a light source and a mirror in order to see the position of your tongue and make adjustments if needed. Alternatively, a good camera with a light source (smartphone/stand-alone video recorder + light) would do the trick as well. I've just watched some YT videos about how to properly roll the Rs and in my opinion, the ones linked below are quite good because the first one describes the mechanics and the second one gives you the inside look of the oral cavity.

Some things to keep in mind while practising are:

If you're experiencing difficulties, get a hold of a native speaker of Italian, Spanish or French, imprison them by cooking some good pasta, just putting sangria on the table or making some crème brûlée, respectively. Then, ask them nicely to teach you how to roll the r. If they live too far, try finding a speech therapist or a linguist but know that they prefer financial intake instead of the caloric one.

If all of this fails, then it's time to practice choking (not literally) and declare allegiance to SKB because pronunciation in Norway still isn't standardised. This means saying goodbye to Oslo (and its rulle-r) and switching sides to the three French sisters of Norwegian phonology - Stavanger, Kristiansand, Bergen and their unique and fancy skarre-r. This is not Sparta, but the voiced uvular fricative ʁ.

Click here to familiarise yourself with IPA symbols and sounds. The alveolar flap ɾ is the one to aim for unless you're part of the SKB crew that uses the aforementioned uvular fricative ʁ.

There was no point to this comment besides to share my observation(s) with my fellow Norwegian speakers/learners. Good day.

Hun and hund are homophones and thus pronounced the same way - /hʉn/. This also means that all eyes should be on the context.

You could borrow the stød from Danish and use it with hund. Described tangibly, you can equate it with a stereotypical karate air chop which is performed while uttering the word.

Linguistically speaking, it's some form of a glottal stop/shock and the correct pronunciation for hund would then be /hunˀ/. The superscripted symbol usually depicts a glottal stop but that only happens in emphatic speech.

Visit this link to hear the difference between hun and hund.

Anyone have a good way explaining how to pronounce smorbrod (phone has no different lettering) or even just brod?

Correct IPA pronunciation is /smœɾbɾøː/. Read @not_justucetys's comment on this page for your problem regarding the letter ø.

May 6, 2019
AboutDuolingo English TestMobileGearHelpGuidelinesJobsTermsPrivacy
Learn Norwegian (Bokmål) in just 5 minutes a day. For free.
Get startedLogin