Translation:I am eating a tasty tomato.

I already reported what I believe to be a mistake. Here both smaczny and pomidor are either in the genitive case or in the animate/personal accusative case. It should obviously be the inanimate accusative for things like tomatoes. Treating the tomato as a living thing seems very colloquial at best and should not be featured here. But, that's my opinion.

Ok, four years later, I have to admit that at least 95% of people talk like that regardless of the level of formality, so the main answer should of course remain unchanged.

I am also confused by these case endings. Anybody able to clarify?

Why is it smacznego and not smaczna?

I'm a little confused as to why the genitive is used here. Wouldn't "Jem smaczny pomidor" be the right way to say this?

Agree - comment above says it's an exception to the rule as tomato is considered animate.

But looking on wiktionary, pomidor is listed as innanimate. So who knows, no moderators have clarified it in this chat.

This is not Genitive, it's an Accusative form of an animate noun, which is identical to Genitive.

English Wiktionary says that Accusative is "pomidor (in colloquial Polish also pomidora)". I'd say that this 'colloquial Polish' is in fact the norm. I have never heard "Jem pomidor" apart from discussions about grammar. Not once in my life.

Most vegetables and fruits are considered grammatically animate without any reason. Some other foods, and some beverages as well. Another group of such nouns are ones connected with technology. With the technology ones, the percentage of people treating them as animate will rather be smaller than those treating food as animate.

Thank you for this explanation. I will picture dancing tomatoes. :-))

I hadn't thought about it before, but maybe the reason is that they are in fact living things.

Polish for Dummies states that things like food, drink, body parts and a few masculine others are considered animate.

For me, a Belarusian, it really sounds as if the tomato were alive or as if it's a person, named Smaczny Pomidor.

I wrote "I am eating a delicious tomato" but it wrote that it was wrong. Not fair! Because delicious and tasty are the same!

Same for some people, different for some others... sorry, we decided to leave "delicious" for the stronger word "pyszny". 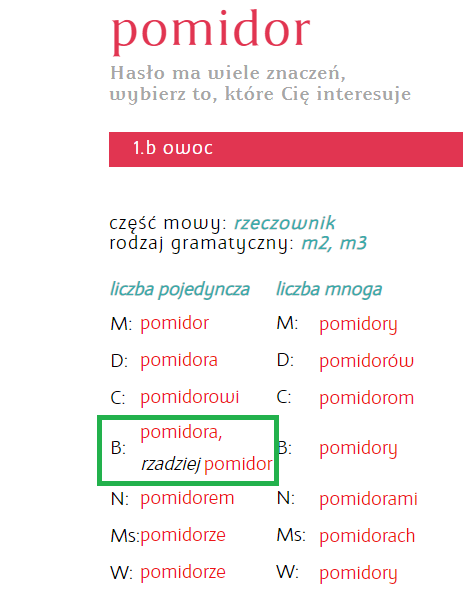 Can anyone answer definitively why the genitive here? Seems strange.

Same word, different form. After the verb 'jeść' we must have a noun and its adjective in Accusative (Biernik). But the word 'pomidor' in the singular takes the Genitive (Dopełniacz) form instead of the Accusative one. So the adjective 'smaczny' takes its Genitive as well. Thus we have 'Jem smacznego pomidora.'

I understand why you wrote it like that, but it's not exactly the case.

It's still an Accusative form, because a declarative sentence definitely needs Accusative after "jeść" (it would take Genitive if negated). But it happens to look identically to the Genitive one.

It's so confusing theoretically! I've got two questions: what's the Polish for 'animate'? And secondly, is 'kobieta' animate?

Asking because for instance in Russian, a word is called animate if its plural Accusative form equals its plural Genitive one. So we say 'вижу мужчин' = 'widzę mężczyzn' (which is correct in Polish) and 'вижу женщин' = 'widzę ' (which is wrong in Polish, it should be 'widzę kobiety'). So in Russian we'd call the word 'kobieta' inanimate. Just like 'pomidor': since in Polish it's 'jem pomidory' and not 'jem ,' we wouldn't call this noun animate.

To be fair though, for masculine nouns in Russian, it's either Acc=Gen in each number or neither. We never have masculine nouns whose singular Accusative form equals its singular Genitive, but at the same time whose plural Accusative form doesn't equal the plural Genitive one (whereas you have it: jem pomidora (sing. Acc=sing. Gen) - jem pomidory (plur. Acc = plur. Nominative); mam papierosa-mam papierosy (not ); mam centa-mam centy).

That would be "żywotny" (and "nieżywotny" for inanimate), but I had to double-check because I wasn't even sure. That's because we generally don't have the need to discuss it in Polish, it's just something that we feel intuitively. I feel that "męskożywotny" is used more often (for 'masculine animate'), because masculine is the only gender where it matters.

I guess "kobieta" is animate (logically), but it simply doesn't matter as it's not a masculine noun so it wouldn't change anything.

The distinction you mention for Russian would be the difference between 'masculine personal plural' and 'not masculine-personal plural', or as we prefer to say nowadays: virile vs nonvirile. That is a different thing than animate/inanimate, for example "pies" (a dog) is definitely an animate noun, but it's not a word for a person, so it's nonvirile in its plural.