Translation:I do not read much.

Why can't I fill the gap with "Я очень читаю"?

О́чень works when it describes the degree, extent of the action:

In the examples above, «о́чень» modifies the verb directly.

However, we don't use «о́чень» when 'very much' is about amount or number, and not about degree. Then, you have to use some other adverb with о́чень (usually 'о́чень мно́го'):

In the examples above, о́чень modifies the adverb мно́го. It can't modify the verb: if you say «Я о́чень чита́ю», it would mean something like 'I'm reading to a gread degree, the reading is strong'. This doesn't really make much sense.

(Confusingly, that this is different when «очень» is negated. In colloquial speech, «не о́чень» can be used when talking about amount. «Я не очень читаю» is not incorrect.)

You always helmping me so much ! Thank you. Is it possible to see all your posts somewhere because I do not read all the discussions about an answer ?

That was really helpful. Thanks!

Great explanation! Thank you so much!

I believe "I seldom/rarely read" is closest to the meaning of the Russian sentence.

I read not as often and not as much as I should.

"I read little" is proper English but more of an older usage and not as common as today where "I don't read much" is more commonly used. They are not exactly the same though. "I read little" is much more accurate statement about how much someone reads while "I don't read much" is more vague as it can be interpreted reading anywhere from not at all to an average amount. It is worth noting that Russian seems to be more direct and less vague than English. It often leads to misunderstanding between English speakers where the listener may think some of the activity in question is happening when the speaker actually meant not at all.

"I do not read enough" if I remember correctly мало implies that whatever amount it describes is insufficient. I could be wrong though.

"I read a little" is not accepted... should it be?

No, that would be «Я немного читаю».

Because "I read a bit" is accepted, I went ahead and reported it.

Hey, there is a word in Russian in the answers. I think its supposed to be all in English.

I corroborate, in the app where a word list is presented for this sentence, one word is written in Russian for the English sentence.

Pedantically, the first can mean both, but normally and typically, that is correct

I read a little is OK in English

Can i say я немного читаю ?

I think yes. But it means something like "my reading skills very bad but I read a little". I'd don't say like that

Could this also mean "I read badly" in a sense that I'm still learning how to read, so it is difficult?

I'm reporting "I seldom read" since I'm sure that this is referring to frequency rather than the amount of content.

What's the difference between мало and редко?

I do not read much

I've a question, why does мама and мало sound the same? Is it like that or is one more of the computers mistake?

My question is WHY my answer was considered wrong when I wrote: "я очень читаю" meaning "I read a lot". "очень" is an adverb, therefore from a grammatical standpoint should be correct. Does anybody know why it is wrong??

«Очень» means a degree/extent of something is great, so its meaning it not combatible with «читать». You just can't read to a high degree or to a great extent. At least in Russian.

It works with some verbs (e.g. любить, я тебя очень люблю 'I love you very much'), but not with «читаю».

It works if you combine it with another adverb, e.g. «Я очень мало читаю» 'I read very little'. Here, очень 'very' modifies мало 'little', so it works. It can also modify adjectives (очень красивый 'very beautiful').

So in this context мало is an adverb, whereas in other contexts it can be used as an adjective indicating an amount of something - ?

Not exactly. First of all, all words have meanings and these meanings are labeled with a part of speech such as noun, verb, adjective, adverb, et cetera (and sometimes more than one if the word has several meanings). Some words, such as "little" can be both an adjective and an adverb, but never both at the same time. In any given sentence, it will be one or the other. With regard to adverbs, specifically, they typically answer questions such as "where," "when," or "how." (If that's a bit too simplified for you, I don't mean to be annoying; I'm just trying to write this for a wide variety of skill levels.)

To continue, the word "мало" is an adverb that means "little," but not "little" like the adjective. When you're using it as an adjective, it is describing the size of something. For that, you would want to use the word "маленький". Here are some examples:

The word "мало", on the other hand, is an adverb. It's going to tell you "how" or "to what extent" you do something. The image below shows you its meanings as an adverb: 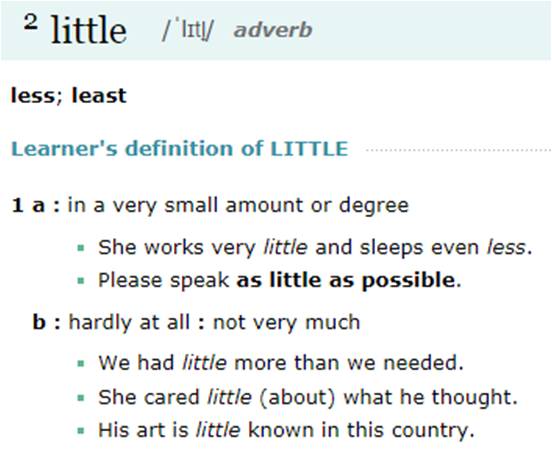 When you need to convey the meanings you see in the image above, you use "мало" not "маленький".

I realize you didn't ask about "маленький" or the meaning of "little" as an adjective, but I thought the contrast between these two words would help those visiting this thread understand the differences a bit better.

I'll have to see if an example crops up that I can copy/paste, but it may be sentences such as the Learner's definition 1b that I was thinking of, that gave the impression of "adjective-ness". As it's been several months I don't remember.

I said "I read a little and it is marked wrong".

Is this article below wrong?

"I do not read much" is an odd translation. It makes the sentence negative. It is a positive sentence - "I read a little bit"

It is a negative sentence. The word мало indicates an insufficiency. It doesn't mean "a few," more like "too few, too little."

There technically isn't a "not" in this sentence, but it strikes me as more of a positive sentence with reservations - "I read, but just a little."

What is wrong in saying "I read a little"

It seems to me the translation should be "I read little", but "I don't read much" is more common among English speakers.

How about 'I seldom read'?

"I read a little" should be the correct translation. Я мало читаю I do not read much?

'I read not much' should be considered as a correct translation,too.

I couldn't tell you why it's wrong, but "I read not much" sounds very odd to me.

My first thought was "I read little", but after over 70 years as a native speaker of English, and three advanced university degrees in languages, I rejected that because I have never heard such a thing.

I am also in my eighth decade of life and I too have an advanced degree in English, yet "I read little" sounds perfectly acceptable to me . . . as a native Califorian that is.

I'm also a native English speaker and it sounds fine to me.

I read very little would sound more common to me as a pretty colloquial native English speaker.

"I read little" is perfectly fine. Just like "I sleep little" or "I eat little", or any other sentence in which you would otherwise use "[negative verb] + much".