Translation:Our office is in the city center.

Surely "centre of town" should be valid? The article isn't required in this instance

You are completely wrong, Duo.

You DO NOT have a space, and not I "have an EXTRA space" (c) as you think.

Use the report button if you find a mistake.

I don't see any. I'm guessing that this file hoster generates personalised ads.

Why not ‘at the town centre’?

Certainly that's very Commonwealth; an American would never say that.

I've heard it in Canada, too. It's still English, so report it if you haven't already. :)

I've never heard that in England - it sounds wrong to me. It's interesting to hear that it can be valid in Canada, though.

Is "centrum" an invariable noun then?

Yes, as far as it's in singular. If it's in plural - maybe we're talking about centers of big cities generally, or more probably: about shopping malls (singular: centrum handlowe, plural: centra handlowe), than it does conjugate.

Also, can centrum? or rynek? refer to the downtown section of a city?

Also, wouldn't "downtown" also be a valid translation of "centrum miasta", at least for US English?

Shouldnt "middle of town" be OK?

As for the other question: "centrum" is technically the area in the very middle of the city. It's usually the most important part of the city, with shops etc.

"rynek" is harder to explain. It suggests an older part of the city, a representative one, which (hopefully) shows some charm of the past. And obviously has some shops and similar buildings. I think maybe it would be best if you used Google Graphics for that one.

Seems to me that the 'rynek' is the 'market square' or - for Americans, who do not have market squares - 'the old town square' would probably convey the meaning of 'rynek' if you're talking about such a place in a city that has an 'old' and a 'new' town.

I think with 'rynek' you've got to include 'square' in your translation. It's the Polish equivalent to the Marktplazs in Basel, Covent Garden before it was roofed, or something like the Piazza San Marco in Venice or Trafalgar Square in London, or even the 'village green' in English villages and some New England towns, though in Poland, it's definitely connected with an large, open space where people congregated for trade purposes (rather than the space in front of a Church where they would congregate for processions, for example; or a simple 'grand square' meant to show the glory of the culture or commemorate imperial or military triumphs).

The rynek is definitely distinguished from 'the center' by being an open space (formerly an open-air marketplace) ringed with buildings that housed merchants who did business on the ground floor of their private homes. The center is the entire area of the city that includes the rynek but is not limited to it - yes?

Can we say that it is a historic center? For cities that are several hundreds of years old (like Gdańsk I guess)

"City centre" is a geographical or administrative term that refers to the inner part of the city, which is (in all cases known to me) significantly larger than the so called historic centre aka Old Town. The historic centre is usually the part that already existed in medieval times and which serves as a tourist attraction.

Below you can see the administrative borders of Śródmieście (more or less a synomym for centrum miasta) in Gdańsk (indicated by a thin red line). I tried to approximate the boundaries of the historic centre with an orange circle, which, as you can see is a lot smaller than Śródmieście. 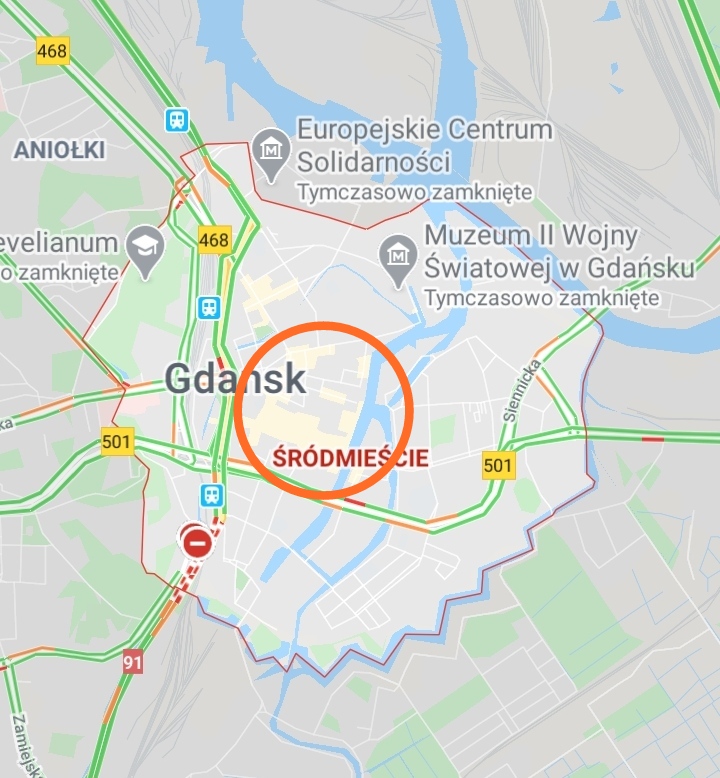 That is a great explanation, thank you!

I can't hear w in the fast version. Is it just my untrained ear?

I guess it's not super clear, at least in the female voice.

I've listened dozens of times & I just cannot hear the "w" on normal speed. Is it just me or are other people having the same problem?

I guess maybe in the female voice it's not really very clear...