Translation:Does he want a trifle?

In anticipation of a number of confused Americans; in the UK a 'trifle' (in this instance) is a cold dessert of sponge cake and fruit covered with layers of custard, jelly and cream. Definition courtesy of the OED.

It frequently also contains sherry (or sometimes Madeira), when it may be referred to as a 'sherry trifle', but usually it is just called 'trifle' irrespective or whether it contains alcohol.

It is a popular dessert for children's parties (usually minus the alcohol :-)) where the top layer of cream is usually covered in 'hundreds and thousands', what Americans are want to call 'sprinkles', I believe.

A Google image search for trifle will reveal a plethora of images which demonstrates the huge variation in what may be considered a 'trifle'.

The concept of the trifle is actually several centuries old and originated as an English desert, although it has long been ubiquitous across the UK. It's first known appearance under the name trifle dates to an English cookery book of 1585.

The Scots have their own version of trifle called 'Tipsy Laird', which is very similar with whisky or Drambuie (or both) being substituted for the sherry. They also have another desert in a similar vein called 'Cranachan' (a personal favourite) whose main ingredients are raspberries, pinhead oats, whisky - all traditionally associated with Scotland - and cream.

Drambuie is a famous Scottish liqueur made from whisky, heather honey, herbs and spices.

Apparently, the American South also has a similar concept called a 'Tipsy Cake'.

The (Quebecois at least) French equivalent is probably known as 'une bagatelle aux fruits'; in Italy, 'Zuppa Inglese' (of which Tiramisu is a variant) and in Germany and Austria 'Punschtorte', although that appears more cake-like. 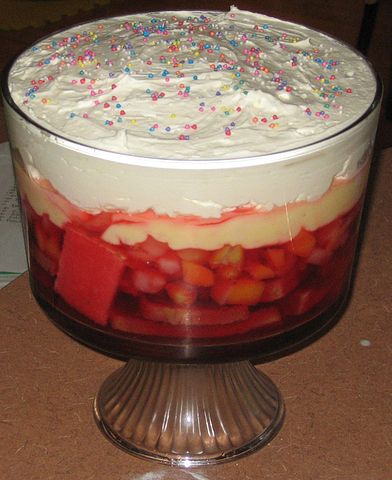 Good anticipating. ;) Thanks! I was pretty sure it was a dessert, but beyond that I was clueless.

I decided I would expand on the original post a little.

Unfortunately, Duolingo's version of Markdown is stripping out the ampersand=q query term in the URL for an image search with a query term. After much experimenting, I've still not got it to work.

Could the translation also be, 'Does he want some trifle?'