Translation:Turn right at the lights.

I see that goleuadau  is the plural form of both golau  and goleuad.
What is the difference between the two singular nouns? Do they refer to different types of light, or are used in different contexts?

Some dictionaries, e.g. GPC, don't list goleuadau as the plural of golau. It seems that golau is the sort of light that does not usually have a plural anyway, such as the light shining through the window. Goleuad seems to be the actual device for making light, formerly known as a lamp. Since neither golau not goleuad is given for English lamp, I think goleuad must have taken over from lamp and erllau in Welsh at the same time as light took over from lamp in English. If anyone knows better, please let us know.

The singular is golau and the plural goleuadau. Goleuad isn't used in everyday language. In some parts of the south, you'll occasionally hear the alternative plural goleuon too.

I'd say that that should be accepted.

That's what I gave, and it was accepted without even an alternative being offered.

Turn at the lights(?)

Yes there is a clear difference in my dialects of English (Scottish and Standard Southern British).

but anything there for any other purpose it is by

I think the difference is that the first category are in the exact place by definition, whereas in the second the proximity is arbitrary.

Is "lights" plural for any particular reason? If it's a traffic signal I would usually say "turn at the light" (singular).

I would say that the plural for traffic lights is by far the most common usage in Britain at least, I can't think of any circumstance where the singular would be used

Thanks. Just one more weird difference between here and there, I guess.

Certainly it is always lights in the UK. I don't know if anywhere else is different, but they are fundamentally plural as they generally come in sets of three (red, amber and green) and are then usually found in even bigger groups as you have at least one set of three for each direction of traffic. When you wish to refer specifically to the lights at one junction you usually refer to a set of lights.

(Note that if anyone finds amber unusual, this is the official term on British roads. Increasingly people say orange and the correct term on the railways is yellow or caution.)

I definitely hear it singular in America, like the whole device is being referred to rather than the individual lights. Also it may make more sense to be singular on some country roads where there's only a single yellow light to make people aware it's an intersection, rather than the set of 3 colors. Just interesting to observe the differences in dialects. :)

It is interesting how you can get used to something and then it sounds natural. To me (British) it sounds wrong to use the singular as they are inherently a set. I guessed that it is to do with the history, so I looked it up in Wikipedia. It says the first traffic light was singular and in London

December 10, 1868: the official birth date of the world’s first traffic light. It was installed at Parliament Square in London. The system was composed of two mobile signs attached to pivoting arms that were manipulated by a lever. The post was topped with a gas-lit semaphore to ensure visibility. But it was short-lived. Less than two months later, the traffic light exploded, killing the police officer who worked the signs.

This does not make it clear exactly how it works, but "semaphore" refers to bits moving to give signals. It sounds like there was a single light on a moving arm, or it could just have been illuminating the arm. From the beginning of the railways they used semaphore signals, and of course they needed a way for them to be seen at night. They used a single oil lamp, and someone had the clever idea of having coloured pieces of glass attached to the semaphore arm. As the arm moved a different piece of glass was in front of the lamp. I wonder if the American singular usage came from the railways or from a similar system used on the roads? My guess is that it did.

We do not have the single yellow lights you describe in the UK. They might have been the predominant form at one time in American?

Anyway, what happens is that once a term catches on it tends to stick, regardless of changes in the technology that obscure the logic of the original word.

This is a Welsh phrase and it means lights

I think you have missed the point of the discussion. We all know what the word goleuadau means. It covers a range of things such as 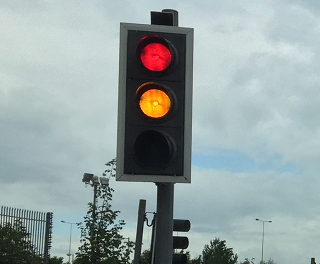 But you said that goleuadau means "lights". We can only discuss if this is true if we are agreed what lights means and if it is correct English for the things in the pictures. But we are not. The whole point of Em484950's and LadyColubrid's comments is that this is not the correct term for goleuadau traffig in their dialects of American English. On the other hand, KannasanAweyl and I have said that it is the correct term in our dialects of British English. So, as there is clearly no uniformity on the correct term in English, any particular translation into English cannot be said the be the "meaning" of goleuadau - it is simply one possible translation.

Of course we know the word goleuadau is grammatically plural, but we also no that you often have to change singular to or from plural when translating:

Thank you, shwmae. I meant to put in a note saying I didn't know which was correct, but I forgot. I posted a question on this page over two years ago about this point, but I had not noticed that you had answered 8 months later. This probably happened because I saw a typo in my post, and when I corrected it your reply would have disappeared temporarily. I have corrected my post.

It's valid English but it is not what the Welsh says, so it will not help you learn the Welsh, which is the purpose of this course.

I agree this is to learn Welsh not translate from english.

I only translate as "by the lights" to avoid DL grammar police taking my points away. In normal situation, I say "at the traffic lights"

There is a load of people agreeing with you, and no one against. Someone needs to report it to see if we can get it fixed.

Edit 10/2/22: just noticed the preferred translation at the top of this page is now at. But it is not clear if it has been changed recently or if it always has been like that as there is a 6-year-old comment saying that by should be accepted, but a reply suggested that by was the default answer 5 years ago!

I got marked wrong for by the lights.