Translation:You are carrying my fish.

Haha! I forgot that "tragen" can mean carry as well as "wear", at first I was thinking, "You're wearing my fish."?!

I Did! 5 minutes ago a bear was wearing dresses, I thought it was possible

I'm Afrikaans and wear and carry is also the same word, so it's really easy for me to learn German

and in Romanian - a purta

Romanian is very similar to German in many ways.

it is latin how is that possible

In swedish too, trough I stupidly translated the sentence as "You are wearing a fish".

Not so silly! If Lady Gaga can wear a meat dress, why not a fish? :)

Or a fish Halloween costume? Or a play?

In Spanish as well, maybe English is actually the odd one out.

In Igbo the words are different.

It's not exactly the same in Mexican Spanish

I tought it was another joke of dou

Yeah, I was totally confused for a second there.

For a second i thought Duo got wild again and was saying you are wearing my fish.. Lol

Should be able to wear your fish if they want to!

but how do you which is which?

... But given that bears regularly wear dresses in Duolingo world, I fear that context is not necessarily a help here ;)

Indeed it is so

I was thinking like... it's odd but why not. One can wear a fish dress... It's 21st century and I can't keep up with the fashion trends for sure

It is possible for that to happen. If you're talking to someone who is wearing your fish, that's what you would say.

Same thing here. "Wear" and "carry" are the same in some other languages I know as well...but it still totally caught me off guard...and made me giggle.

I only knew "trägst" as wearing, had no clue it meant carry too :(

Wasn't introduced previously, I was confused too haha. It's the same in Spanish, incidentally (tragen in German = llevar in Spanish = to wear, to carry).

It's the same in French too! Porter = to wear/carry. It's funny when there are such clear links between European languages but that don't exist in English.

It's also the same in Russian. Clearly this goes beyond one continent :-)

Portuguese has "portar", but nowadays it's "wearing" sense is nearly completely dead and we just use "vestir".

Is the same in Catalan Portar =to wear/carry

Italian as well, though its "wear" sense is a bit uncommon now, except in literature.

It makes sense. We do carry our clothing- just not in our hands.

This was me lol

Why is "meinen Fisch?" and not "mein Fisch? I don't get it

Because it's the direct object of the sentence, it gets put into the accusative case - therefore, 'meinen'. If it were the subject it would be 'mein'.

Look at this site http://deutsch.lingolia.com/en/grammar/pronouns/possessive-pronouns.

My daughter said this to me a couple of years ago. We'd been to a fair, she won a goldfish, and when I told her it was time to leave she said "Fine, you're carrying my fish." I never expected that sentence to come up again. :)

Well, if Gaga can wear meat, why not fish?

Omg I just said that it's so true

How about, "you bring my fish"?

What if I drop a plate of fish on my wife and I actually want to say "You are wearing my fish!" in German? I am assuming I would say the same and -based on the context- fluent people would get the pun.

You really should wash rice before you cook it.

Rice that isnt "ready to cook" is always washed before hand

My hovercraft is full of eels

If I said you had a beautiful body, would you hold it against me?

Um, may someone please tell me the purpose of an umlaut? Im speaking in general when i say this.

In German, an umlaut changes the sound of a vowel to give it a more "e"-like sound. Normally, the "a" sound is pronounced like "ah," "o" like "oh," and "u" like "ooh" (roughly). Add an umlaut and ä is pronounced "ae" (sounds closer to the American way of saying the letter). ö and ü are pronounced "oe" and "ue" but American of course does not have similar sounds for me to compare them to, so you'll just have to listen.

The vowels that use them (a, o, and u) can also be written out in a "longhand" way that reflects this. For instance, "trägst" can also be written as "traegst." (I don't know that Duolingo will accept this, but it is correct and Germans do it all the time). When you spell it out like that, it is easier to remember how to pronounce the sound.

Thank you so much! I will definitely keep this in mind! :-)

Could this also be interpreted as a command to the listener? "YOU carry my fish." Or would a command be: Trägst meinen Fisch? Or am I wrong altogether?

It could be a command by saying it by using a speacial emphasis. The imperativ would be:

You see, the imperativ form gets another form than a normal statement sentence.

How would you say you are wearing a fish?

Same way. Although to make clear what you mean, because it's so unexpected, you might be more explicit: "Du trägst als Kleidung meinen Fisch."

And that's why we have both "wear" and "carry" in English.

"you bear my fish" incorrect?

Still, that would have been something to report as "my answer should be accepted."

The dialect on which I was raised has bits of Cornish and Scotts-Irish diaspora, Pennsylvania Dutch idioms, and a heavy helping of King James. My natural English tendencies are admittedly archaic, but they are often the first words which come to mind.

I'm not sure why, but the title "Fish Bearer" is really funny to me. lol

I was confused by this. I didn't realize that tragen also meant to carry. I was thinking that they were using wearing as a synonym for "dressing" (the verb not the noun). When you prepare meat, especially game in English you can talk about "dressing" the meat or fish. It just means to prepare if for cooking. I don't know what the word in German is then for dressing meat or fish is?

is there anyway to know whether the sentence is implying "wear" or "carry"?

The only way to know is context.

Alright, how would you actually say 'Are you are wearing my fish'?

It's the same, but Duo is shaming us for imagining silly but plausible scenarios.

With the Super Bass-o-Matic '76 we sure can: 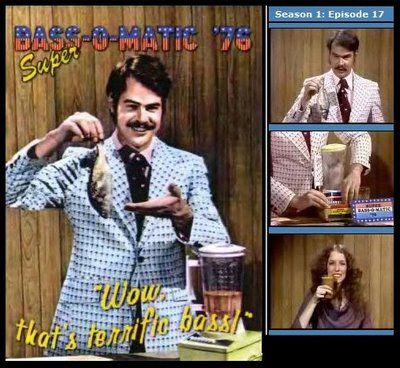 Some of the sentences Duolingo uses as examples...."she is carrying my fish," "I am not a fly".... Oh dear.

Why is it "meinen" ? Is it because "Fisch" is masculine?

Because Fisch is masculine, singular, and Akkusativ.

Subtle difference. "Carry" implies movement, but "hold" suggests remaining in one place. Even though you can hold something and perhaps still move, the movement would normally be specified additionally. Compare:

But does "Tragen" also implies movement ?

Just out my curiosity, is there certain way to split two meanings of "tragen"?

For example, how do I say "I carry my shirts" in German in a distinct way without any help of context? Or can I?

you wear my fish

How do you find out "trägt" also means carry? When Duolingo tells you your answer is wrong, because it has a second meaning you weren't shown before.

Technically, "you're wearing my fish" is a correct translation. It would be odd for that to happen, but if you're speaking to someone who is wearing your fish, that's what you would say.

Hahaha! It's really incredible. There is a resource I can suggest to see such different uses! https://www.magiclingua.com/learn-german/how-to-say-hello-in-german

'Ich trage meine Jacke'. Would you use this for both 'I am carrying my jacket' and 'I am wearing my jacket', or are they generally expressed differently in practice?

I am curious, is there a fundamental difference between carrying a fish and bringing a fish? Why is "bringing" marked wrong in this case?

"Bringing" implies hierhin. "Carrying" is more neutral as to the destination (if any).