To play a coma patient?

My time to shine has come.

Would "lười" be more common than "lười biếng"?

I would say "lười biếng" is more common.

It depends on each person. Someone likes to say "lười". Some others say "lười biếng" (and "lười nhác" or "nhác" as well). 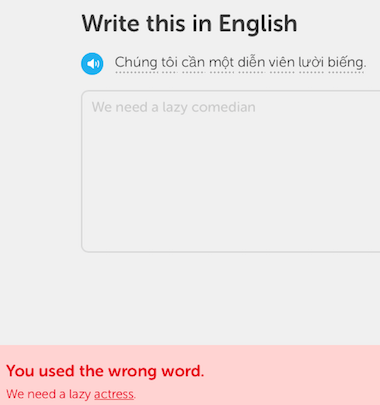 Would you please explain the differences in the pronunciation of the word một? Sometimes, it is pronounced like "mut," sometimes like "muten," and some times like "mo."

Purely from my observation (so I might be wrong) the "n" seems to be added where there might otherwise be a "stop" in the flow of the sentence. It seems a bit like when English uses "an" instead of "a".

As for the non-pronunciation of the "t" I think that's something you just have to get used to.

Judging by my Vietnamese wife and her friends, pronouncing the ends of words strongly isn't very important in Vietnamese, not nearly as important as getting the tone correct. It is interesting because it carries over into their English, for example my wife says "fi" instead of "five" and "smi" instead of "smile".

When I tell her to finish the words she says that she did. And then we fight about it because she clearly didn't.

good observation. and it's pretty accurate when talking about the transposition of it into English.

Thanks :-) Unfortunately, it's pretty accurate about the fighting too!

Vin Diesel? Are you filming a movie about magic cars by chance?