55 Comments
This discussion is locked.

Bad joke: If you name your cat "meow", it can introduce itself!

What on earth are you talking about meow?? (Super Troopers reference...)

Mazzorano thank you so much for writing the duo memrise course. Please could you write a level for this chapter. It is so hard trying to learn all these new verbs. I'm aware you are already working hard to add new levels for later chapters so may not have the time. Please know that all your hard work is very much appreciated. Thank you.

I believe this unit is already on Memrise.

Thank you, it wasn't where I expected but I've found it now.

What is the chapter name in memrise please? I have a hard time locating it too. Thanks.

Thank you CarrieYael. I finally found it.

See, English is not that hard, even the cats can study it!

In Russian there was a popular rhyme: В Англии даже киски мяукают по-английски (In England even the cats meow in English). I wonder if whoever wrote this sentence was thinking of this rhyme.

my dog studies Japanese! they can be friends!

For a second I thought I was seeing things LOL favourite sentence so far!

It was funny to me at first but then I realized this actually wasn't such a weird sentence (well, maybe more weird that it's in Hebrew) but I mean people say their pets are learning English a lot. Like whose cat or dog doesn't know the word food? My cat even understands when I tell her I need to get up (and probably far more amazingly tends to get off me so I can, though often she makes ticked off meows while doing so).

Much more funny though if you mean the cat studies vs is learning. I like the image of a very studious cat with a little pair of glasses sitting in front of a textbook. Haha. 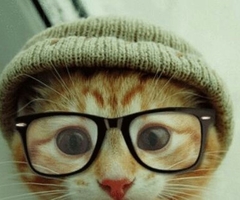 that image always reminds me of the Israeli cat soap opera, hatulunobla. the episode with the cat therapist: https://youtu.be/wPDCf3ZUw88

This is from a poem by A. Pushkin and now is a very famous meme in Russia - חתול מדען :)

Can it be translated as "my cat is learning English?"

Not sure about "learning" (is it natural English?), but "learns" is definitely correct.

Could this be translated literally to "The cat of mine is learning English."?

I think it can, but that would be slightly strange English.

Good question - as a native speaker I can testify that your suggestion is wrong, but I can't say why.

You can only use את with a definite article (ה) or a proper noun/name. Language names in most languages are not proper nouns, including in Hebrew.

And it's strange to me that they are not proper nouns. Why is "English" less proper noun than "Tel Aviv"?

Also, is it true that in most languages language names are not proper nouns? For example, in English and French and German you can't add a definite article before a language name; doesn't it mean it is a proper noun?

I think you are overcomplicating it :)

Back to Hebrew: You can use the definite article with language names when it's appropriate. For example:

Actually, language names in Hebrew behave neither as proper nouns nor as non-proper nouns: you can't say לומד את האנגלית nor לומד את אנגלית. I'm not sure what's going on here, and can't think off-hand on other words behaving like this.

In English, names are proper nouns, that's why they are capitalised.

Right, but are there proper nouns that are not capitalized? Is there a syntactic distinction in English between proper and non-proper nouns, like there is in Hebrew?

Oh, I kind of think I understand what you are asking, but you're going to have to give of an exact example if I'm wrong. Names of cities and streets are proper nouns, the whole name, so south of the Mason-Dixon line, East Coast, etc. But most of the time we don't know if it's "double Gloucester cheese" (Gloucester is a place, but is the cheese a brand name or is it named for the location? ) and have to look it up. If there are place names or proper nouns in the word then those get capitalised, but only if it refers to the place name, that would already be capitalised... Like: I like swiss cheese (not capitalised because, it's not Swiss - who knew?), or: my dog is a collie, but I've always wanted an Alaskan husky or an Irish setter. Most of this stuff that there is confusion over, like some things have the same name as places but aren't named because they come from those places.. Like french fry. There is no exact standard in this area, some dictionaries say different things for different words, I usually don't think about it unless the keyboard app prompts a capitalisation, then I search to find out. Registered trade marks are capitalised too, like Jeep or Perrier. What is the distinction in Hebrew?

Update: apparently Gloucester is named for the region and type of cow. Some places say capitalise and others say don't. When in doubt I'd rather capitalise, if you're wrong (personally) I think it doesn't look at as bad as if you leave something lowercase. (The first looks like an accident, and most people wouldn't even notice it, but the second looks like you were lazy about typing or editing. But that might just be me).

The only time a proper noun might not be capitalised if it was a name purposefully written that way (trademarked), like iPhone or Ebay.

Thanks Teri. When I wanted to write down the syntactic distinction in Hebrew I realized it's just the same in English. Can you or can't you add "the" to the noun? If you can't: proper noun. If you can: non proper noun.

Returning to language names: in English you can't add "the", so proper nouns, and indeed they are capitalized. In Hebrew - hmm, we don't normally add ה, but it doesn't sound ludicrous to me.

You can add "the" to proper nouns. Examples: I'm going to the Hilton on 4th avenue. (Hilton is a hotel chain). I saw Mike today. (Which Mike are you referring to?) The Mike with black hair.

I want to buy the iPhone but a Samsung is cheaper.

No, Troy, that is certainly not the reason. If that were the correct answer to SL (S.Longstride)'s question, then Hebrew would never use "את" before a proper noun.

We use "את" to mark a definite direct object of a transitive verb. E.g., here's a current (2019-12-26) quote from the Israeli newspaper "הארץ" on haaretz.co.il/
בתל אביב יודעים לחגוג את חנוכה כמו שצריך.

A proper noun, such as Chanukah (חנוכה) is inherently definite without the definite article, but it still takes "את" when it's a direct object.

Mine dropped the school long time ago. They changed their mind and got to work instead.

Why not: doesn't learn?

Because there is no לא in the sentence.

In Israel there are clever monkeys and cats!!

ללמוג does mean to learn, doesn't it? So it should be accepted as well as to study.

is "my cat is leaning English" unaccepted?

Same word in Hebrew, if that's what you're asking.

What's wrong with my cat is learning English