Hello there, everyone! מה נישמע? I have realized that one of the best ways to learn a language is to have someone native to that language help you with your studies. So hi, my name is Neta-Li, and I am willing to answer all your questions if you need. נדבר!

An old number is Modern Hebrew is 80% Biblical Hebrew. However אני is getting used in Biblical Hebrew as well, according to the teacher and the ones who wrote the course literature.

Do you think the course offers by Duolingo (Hebrew for English speakers) is a good one? Thanks

I think it's not bad. Obviously, people learn differently. It's a great course to help you learn the basic stuff. Once you finish it, you can easily learn using other methods, too, such as reading or television.

Hey! I've made a survey for my research project about the current Jewish languages orientated either towards Jewish people or people who have some connection to Judaism and Jewish traditions. Do you think you could help me by answering these questions? It'll take you just a couple of minutes! This is the link: https://goo.gl/forms/GvWKEqRtQIP59IHL2

Do you have suggestions for Hebrew language movies and kids books? Anything will be gratefully appreciated. Visiting your magnificent county in March 2019. שלום

Hello :)
I made a compilation of some Hebrew resources, including kids' books, that you can use.

How can you determine the gender of nouns?

That's a tricky one. As in all languages, there are irregulars, but since I grew up speaking Hebrew it was a lot of trial and error for me. Usually, the rule is that when a noun ends with either "ה" or "ת" it's female, such as when you compare the word "איש" (man) to the word "אישה" (woman); or, alternitavely, when you compare the word "סופר" (author-male) to the word "סופרת" (author-female). It also helps trying to make the noun plural, and see how it ends.

Now, as I said, there are irregularities. That is why it is not unusual to hear people, both adult and children, who are new to the language say "נמלות" (nemalot / ant) instead of "נמלים" (nemalim / ants). In these cases it's basically trial and error. After enough practice, you get the hang of it.

Last note: mixed plural nouns were once said as male. However, since the Academy of the Hebrew Language dictated otherwise, it is common that you go according to what gender there is a majority of.

I am not sure how we handle gender neutrality to this day.

I guess we just don't.

When it comes to mixed genders I simply use the masculine grammar, but then I'm a beginner.

You aren't making a mistake, so you're pretty well off!

Can you describe to me how (et) works exactly? I'm having a little trouble with direct objects.

I will try my best to explain. The word את ("et") is usually placed between a verb and an object upon which an action is being done. For example, the sentence, "My dog ate my homework." would be translated like so:

What did the dog eat? My homework.

In this case, the word "את" will follow the verb "אכל" (akhal / ate) and precede the object that is being eaten, a.k.a. my homework (שיעורי הבית שלי).

I hope this helped. I tried explaining it the best I could.

Please note that the usage of את depends on the definiteness (יידוע) of the object being acted upon. את appears only when acting upon definite objects. Definite objects are specific objects known to those participating in the conversation. Fortunately, definiteness in Hebrew and English are very similar.

The following cases are definite in hebrew: (מיודע)

For an indefinite noun, which does not indicate a specific instance of an object, we do not use את:

(The dog ate AN apple). Note the indefinite article, this is not a specific article.

That dog is too hungry!

Thank you for the addition!

I know this is kinda late but I just found my old screenshot from a Duolingo lesson and then I found this discussion. A coincidence? 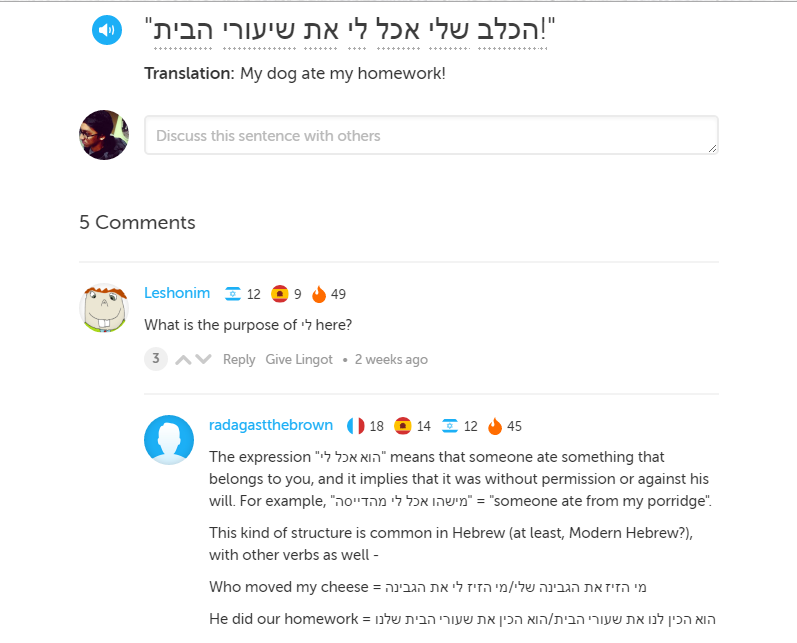 In the screen shot, it seems that there is "li" after "akhal" and your example above does not have "li". So, is both correct?

It helped. It makes a lot more sense. :) I'll put this into practice this coming week.

Are there any groups that chat in basic Hebrew for practice?

This is an Israeli Facebook group that communicates in both Hebrew and English. You can easily ask people there for more help if needed: https://www.facebook.com/groups/DFTBAIsrael/?ref=group_browse_new

Lovely to find this discussion and I have already benefited from reading questions and the excellent answers. Thank you!

I already speak arabic, which makes hebrew a bit easier. BUt are there any specific tips for arabic speakers that are learning hebrew

Hello Neta-Li, one question? Are you from Israel ?

i am also from israel

Awesome! What area are you from?

i live in the מרכז

are you speak spanish?

No, sorry. Not really. I speak some Italian, though, if that helps?

I am in Virginia and would like to know how I can speak to someone in Hebrew who is a native speaker. I am trying to learn but speaking with someone would be a wonderful help. Do you know how I could do that?

Hello. I sympathize with your plight. I spent some time hunting around for somebody who would be willing to do video chats with me in elementary Hebrew for money. There was only one person willing to do so but it was not feasible because of the time difference (I live in Japan). It seems there is a ton of material available for all of the functions EXCEPT speaking. For example, I am the first and only response you've received in the two weeks since you posted (and I only started here 8 days ago).

Whereabouts in VA? I'm on the Western brink of NoVA, and I am not a fluent speaker :). Perhaps it would be worthwhile to "compare our notes".

Hi Dimitrij I live in Check which is in Floyd County Va. It is near Christiansburg and Blacksburg Virginia. I would be happy to exchange/compare notes.

שלום! I understand how frustrating it can sometimes be, learning a language all by yourself. I am not, BY ANY MEANS, a fluent Hebrew speaker, but am attempting to learn this beautiful language. Btw, I live in Appomattox, VA, so if you ever come this way... ;)

It is a beautiful language and I love learning it. And if your ever this way towards Floyd maybe we could learn from each other

You two are really tucked away, but I might offer you some encouragement: 4-5 years ago the nearest organized Hebrew-learning place I knew of was 50 miles away, but recently a Chabad house was established in our city, and there is already a group of maybe 20-30 "regulars" coalescing around them plus about as many loosely associated folks. This is IMO close to a "critical mass" for a self-sufficient cultural community, with Hebrew classes as a part of an adult learning program.

So you can see I am not making it up, here is a pic from our local newspaper. Although I wonder why exactly these two pix that do not really tell much about the gathering. What kind of a Hanukkah report doesn't have pix of latkes and sufganiot!

I am going to see some of my Israeli friends this weekend for Hanukkah!! I am really excited, not to mention they are some of my best friends and I don't get to see them often, but they always speak Hebrew, usually amongst themselves but as I learn more (as they find out that I am really serious about learning, and as I gain more courage) they talk with me more in Hebrew!! Israeli people, I find, are very willing to help! And that is a blessing! ;)

Btw, tgunns, my email is leelithompson05@gmail.com. You can email me, if you feel comfortable; we could help each other along. If not, that is totally fine, I just wanted to offer it, in case you wanted some help (not sure if I would be any). Or if you just want to be assured that someone else is on this journey with you... ;) I know that can sometimes help motivate you.

Hey Leeli thanks for the email that actually sounds great to me. My email is belchertroy70@gmail.com and my name is Troy. The tgunns101 is an old one that I haven’t updated on duo yet. I still use it randomly.

Hey! That is a lot of languages you are learning!!!! Good luck!