Translation:Esperanto is a global language.

17 Comments
This discussion is locked.

Esperanto is a world language should be accepted!

World language for sure works in English!

Not only does "world language" work in English, it seems to have become almost a set phrase, which surprised me. It beats "global language" in a Web search, and trounces it in published books, according to this ngram (world language is the red line): 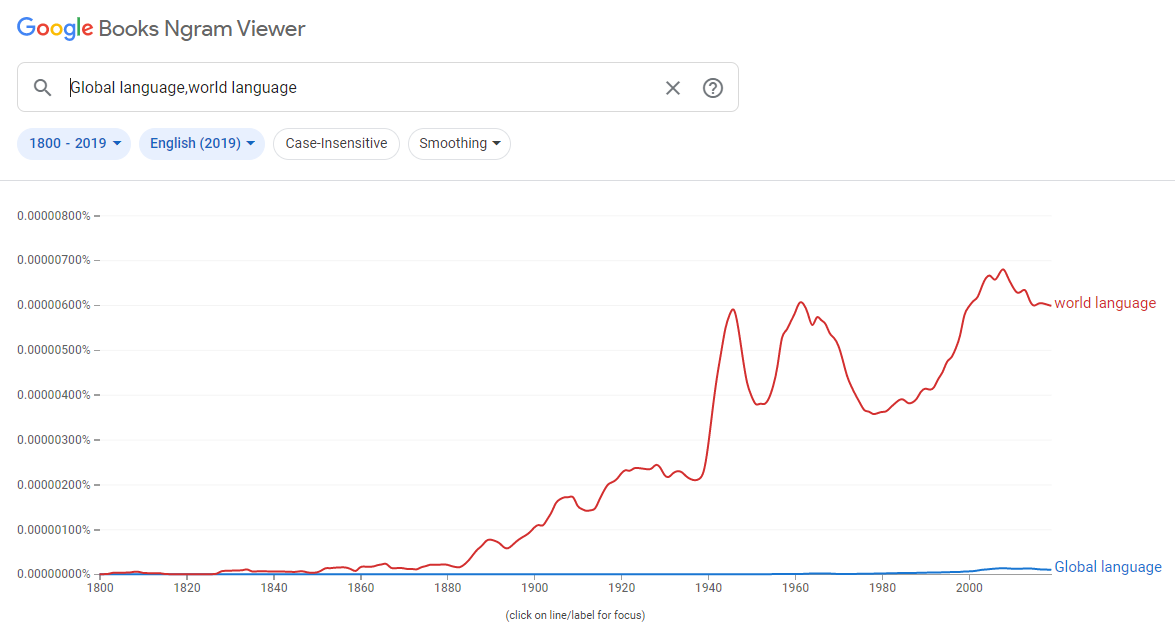 Notwithstanding that, it does use different vocabulary and grammar than the Hebrew sentence, and translating "שפה עולמית" as "world language" doesn't demonstrate that we recognize those differences. The Hebrew uses a noun and adjective, while "world language" is two nouns that I think would be שפת עולם in Hebrew.

My preference would be for the course to accept "world language", while telling us about the linguistic difference and perhaps giving reduced points. (Fat chance, right?)

There's a good article on Wikipedia, which will give you the basics. It's interesting that the creator of Esperanto was a Jewish ophthalmologist, who lived in the 19th century.

NB - Dr. Zamenhof - he was a native speaker of Yiddish, had already written a Yiddish grammar. He noted that Yiddish allowed Jews from every country [in his Ashkenazi world] to communicate with each other effortlessly. Eventually, he thought that the Earth would be a better and more peaceful place if everyone could do the same, eliminting barriers, and so created his "universal language", the language of hope (root esper- like esperer in French, esperanza in Spanish, aspire in English). Esperanto was not the first attempt to create a universal language, but Zamenhof was the first to do so rationally, by eliminating grammatical exceptions and irregularities, conjugations and most cases, and by creating words based on roots common in European languages. Nowadays, Esperanto is criticized by some for being ethnocentric, i.e. eurocentric. But in his day, these were the most commonly understood languages in the 'civilized' (i.e. literate) world. Many non-European languages had no writing system; Far Eastern and other non-Indo-European languages did exist at a high cultural level, but to include them would have defeated the purpose. Today, there are Esperanto speakers all over the world, but in very small numbers. For better or worse, the language of international communication is English. For Jews, also, international communication is most often in English, not in Yiddish or Hebrew. But a language is more than just a means of communication. It is a rich cultural artifact, inseparable from the values and traditions of its speakers. Esperanto does not fulfill this role.

I had no idea! Fascinating, thank you.

It's only global if you're extremely Eurocentric

Universal? how would you say that?

Global language sounds weird to me in English. My gut instinct was universal, too.

May 16, 2021
AboutDuolingo English TestMobileHelpGuidelinesJobsTermsPrivacy
Learn Hebrew in just 5 minutes a day. For free.
Get startedLogin