How often do you speak Irish?

I want to know if people in Ireland speak Irish often or if at all? I've looked it up and most places I've read say no but I want to know if anyone on here speak it. I don't live in Ireland (I wish), but if I ever moved there would anyone know what I say if I spoke Irish to them?

I live in the East and Irish is pretty much dead here and most people only speak it in Gaelscoils (Irish speaking schools). I don't know about the West. I used to speak with my Granny when I was small but we don't get along anymore. The Gaeltacht regions are where students go to speak Irish and most of the area speaks Irish on a day to day basis. If you are planning on speaking Irish in Ireland please refer to this map. 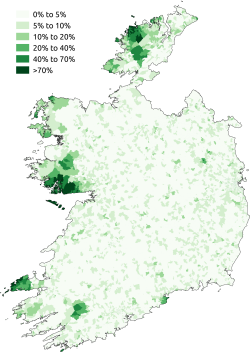 Check out https://www.youtube.com/watch?v=eyll-bBZzyk for the first episode in an entertaining TG4 program that explores that very topic. Mostly Irish language but with English subtitles

Before anyone watches "No Béarla", the show linked above, you should read the comments about the presenter in the thread Irish Language Shows.

Bad and all as the state of the Irish language is, "No Béarla" is at least as much about the presenter as it is about Irish.

I live in Ireland, and Irish is actually a dying language here, but there still teach it here, I am actually fluent in real life, but it's only used in Ireland and it's not really a popular language.

I don't live in Ireland but I speak it a lot when I am there.

As far as I can tell, there are places in Ireland called "Gaeltacht" where people speak Irish in day to day lives. Most Irish people don't talk Irish.

Not much of us speak it much here, except in irish schools. but in certain parts it's the native language.

Learn Irish in just 5 minutes a day. For free.