Translation:The hare and the turtle

Anyone ever heard of "The Tortoise and the Hare?"

Thank you JacobNatse. We were really taken aback when we noted how many people refused to accept that a "hare" and a "rabbit" are not the same. Poor Aesop (Αισώπος) would be turning over...

I don't see how the distinction between a hare, a rabbit and a jack rabbit is helping to teach a language.

If you had a choice wouldn't you prefer an accurate vocabulary over an inaccurate one? And where would the divide between what is helpful and not helpful come? Would we be doing our job if we were not accurate?

If I had the choice I would want all lessons to be in the context of normal conversations that you would have in operating within real life. This particular distinction is of no use at this point in my learning when I can't even hold a basic conversation. The quicker a learner gets to conversational ability the quicker learning momentum can kick in.

Yes, good point and I'd have to agree. This is only the fifth skill out of 73 and we have covered only basic ideas and are trying to build up a vocabulary base and while I'll admit that a "hare and a turtle" will not ordinarily be useful in daily conversation this is the Animal skill.

We do encourage cooperation from the community and if you would like to give us some ideas for alternative sentences on the "New Tree Development Forum" they would be greatly appreciated.

I have finished the greek tree and now I can read mostly child books. I bought one based on Aesop. Thanks to you guys now I enjoy reading "Ο λαγός και η χελώνα". The people complaining about getting straight to conversational skills are like the hare but the people taking time to learn steadily less frequent vocabulary are like the turtle that wins at the end. 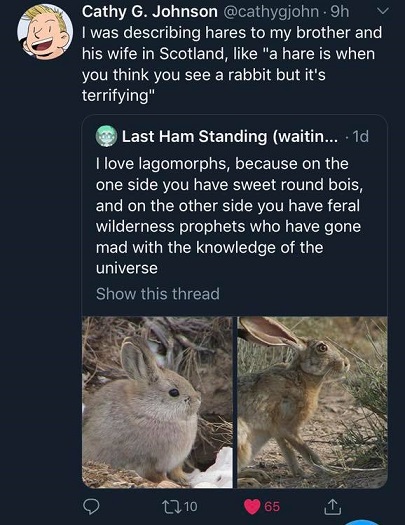 The linguistic distinction between hare and rabbit is quite alive and well in British and Irish English, where hares are a native species, and rabbits are an invasive pest introduced in medieval times. The animals look very different, behave differently, and taste quite different (though since hares are endangered here one rarely eats them).

for most Americans, a rabbit and a hare are the same thing.

Yes, but they are not and we do have "hares" in America. We could just as well have used κουνέλι (rabbit) here but a bit of variety keeps us on our toes. :-))

A bit belatedly in the discussion but here’s what Wikipedia provides: “ Hares and jackrabbits are leporids belonging to the genus Lepus. Hares are classified in the same family as rabbits. They are similar in size and form to rabbits and have similar herbivorous diets, but generally have longer ears and live solitarily or in pairs. Also unlike rabbits, their young are able to fend for themselves shortly after birth rather than emerging blind and helpless. Most are fast runners. Hare species are native to Africa, Eurasia and North America.” January 2020

"Hares and rabbits (Leporidae) together form a group of lagomorphs that includes about 50 species of hares, jackrabbits, cottontails and rabbits. Hares and rabbits have short bushy tails, long hind legs and long ears...... The term "hare" is generally used to refer only to true hares (animals belonging to the genus Lepus). The term "rabbit" is used to refer to all remaining subgroups of the Leporidae. In broad terms, hares tend to be more specialized for rapid and sustained running while rabbits are more adapted for digging burrows and exhibit lower levels of running stamina" http://animals.about.com/od/haresrabbitsandpikas/p/hares-rabbits.htm See also http://animals.about.com/od/lagomorphs/p/hares-rabbits-pikas.htm, where we see our Greek word in use. Leporidae must be based on Latin. I asked my husband what he would call a smallish rodent with long ears that hops, and he said "you mean rabbits?" He found a source that said that although these animals were once considered rodents, they are now their own group, which includes pikas. From the above it sounds like there are more species called rabbits than hares. Maybe there are more hares in Europe and more rabbits in the US???

You are a virtual treasure trove of info and as here always with interesting and informative input. I was never aware of the large variety that existed. As for the population of either in Europe or Greece, in particular, I have no knowledge. I do know that hares are hunted while rabbits are bred often in someone's backyard but also as a commercial undertaking. Both rabbit and hare are eaten in Greece and rabbits, of course, are kept as pets.

There may well be more hares in the UK than in America but although they were common, they are now relatively scarce here and on the verge of becoming officially vulnerable due to loss of habitat and illegal hunting. Rabbits on the other hand are numerous to the point of being considered vermin and it is illegal to release any rabbit into the wild, even a wild rabbit which has got into your vegetable patch!

Another trivia fact which you might find interesting is that not only are hares less well adapted for digging burrows but they actually spend their lives above ground and do not burrow at all. Even when breeding they dig "scrapes" which are bowl shaped depressions in the ground. Whilst rabbits, as we all know, dig burrows, sometimes to the extent of undermining the affected land.

By the way, I think Americans would call a hare a Jack-rabbit—if they were aware of the difference. Of course some people know the difference, just like they can distinguish more than 5-10 different birds, but for a common American, hares are in fairy tales and Greek fables, like this one, where we'd call the turtle a tortoise, equally mythical.

Well, I'm an American from a big city and while I don't know all those bird types I do know the difference between a "hare" and a "rabbit" and I also don't see any reason that we shouldn't have variety in the course. Let's not forget this is a Greek language course where "hares" and "rabbits" are distinguished.

We include the definition in the drop down hints so it's not such a struggle to write it. Jackrabbit is also accepted as correct. Btw a jackrabbit is a variety of hare.

...started a race. Inches before the finish line, the hare decided to take a nap because he was tired and had figured that the tortoise wouldn't catch up in time to make it before he woke up. However, this couldn't be farther away from reality. The tortoise crossed the line, he was still sleeping, and, when he woke up, he realized in awe that he shouldn't have quit literally one hop away from the end.

The moral here is that, if you are the first in a competition, don't slow down until you ensure that you've finished.

It's odd but in Greek, we do take care to distinguish a rabbit from a hare but not a "turtle" from a "tortoise". I've just looked up "tortoise" is a few good dictionaries and all but one give the same word as for "turtle" (χελώνα). That one gives "χερσαία χελώνα" = land turtle stating that in colloquial usage it is "χελώνα".

Of course, on Duolingo we accept both "turtle" and "tortoise" for "χελώνα".

Greek and Latin are the basis of science. In Portuguese, λαγός means "lebre", from Latin "leporis", and it's feminine. As to the turtles, there is the order "Testudines" (Latin), the superfamily "Chelonioidea" and the family "Cheloniidae" (both went from Greek into Latin).

For you linguists, I posit that we don't eat hens or roosters, we eat chicken; we don't eat cattle, we eat beef; we don't eat pigs or hogs, we eat pork. And we'd rather eat hare than rabbit, escargot than snails.

Yes, to all except we do eat both hare and rabbit. They are not the same and Greeks distinquish between them. See the comment by Usagiboy 7above. And we call snails, snails unless ordering in a French restaurant.

Those distinctions are nice. In Portuguese we eat "the animal itself". We don't have any names for their meat, just pig, hen/ chicken, ox/ cow and fish. ajahahaha