MODAL PARTICLES: WHAT ARE THESE?

Modal particles are little words (normally adverbs) heavily used by the Dutch to convey extra information about the speaker's attitude or the tone of a sentence. Think of them as "flavors" added to a sentence in order to give it a different connotation.

There's no clear grammatical distinction from regular adverbs, but on an intuitive level we can say that modal particles tend to affect the meaning of the entire sentence, whereas adverbs mainly focus on changing the meaning of single words. I want to stress that the limits between the two categories are fuzzy, and it's not a good idea to use a grammatical approach when trying to understand them, you should instead try to get a feeling of how these words are generally used by native speakers.

When looking at word order, modal particles are usually found before indefinite or indirect objects, and after a definite phrase.

WHY SHOULD WE CARE?

Given the difficulty of translating them without loss of meaning, they are sometimes overlooked, but don't be mistaken: they can radically change your sentences, and putting the wrong word in the wrong spot can make you look rude or confuse your interlocutor.

Let's take a look at this example straight out of iamexpat.nl [1]:

Another example, this time from eudu.eu [4]: 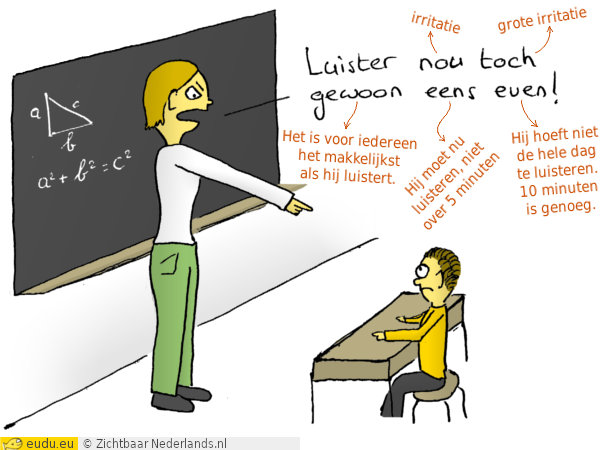 As you can see, modal particles can be easily combined and mixed together by Dutch speakers in order to mess up with us non-natives :) so you better know at least some of them to have a grasp of what's going on inside their minds. Today I decided to deepen my knowledge on the matter and I ended up creating a quick list of the most frequent modal particles (disclaimer: the info presented here is a collection of definitions and examples I found googling around, plus some made-up examples. Use them at your own risk!). Since I found basically no mention of this argument here on Duolingo, I thought it was a good idea to share my work with you all. Any corrections and/or suggestions from natives are obviously welcomed. :) Now, without further ado, let's dive into it.

Ben je wel eens daar geweest? = Have you ever been there?

Wil je dit even lezen? = Will you take a second to read this?

Haal jij Lotte even op? = (While you're at it) can you go pick Lotte up?

Kunt u mij even helpen? = Can you help me for a moment?

Weet u misschien hoe laat het is? - Please, do you know what time is it?

Gaat u maar zitten = Please have a sit

Dat heb ik je toch gisteren gezegd = I told you that yesterday, after all.

...maar ze hebben het toch gedaan = ...but they did it nevertheless

Je bent toch niet ziek? = You aren't sick, are you?

We hebben vandaag een toets, toch? = Today we are having a test, aren't we?

De bussen rijden toch wel? = The buses are in service, aren't they?

Ik heb veel gestudeerd! - Maar je bent nog steeds niet klaar, hoor. = I have studied a lot! - But you are still not ready, regardless.

Doe dat jezelf niet aan, hoor! = Don't do that to yourself, ok!?

Ik vind bier niet lekker, maar hij wel. = I don't like beer, but he does.

Zij weet mijn naam niet, maar zij weet wel dat... = She does not know my name, but she does know that...

Waarom bestellen we niet gewoon een pizza? = Why don't we just order a pizza (instead of cooking)?

Dit is gewoon bizar! = This is really bizarre!

Willen jullie soms wat drinken? - Do you want something to drink? (not implicitly asking what they want to drink)

Here we've seen some of the most frequent Dutch modal particles and their hidden meanings, and we have learned that the same word can have a completely different connotation depending on the context, the emphasis, and its position in the sentence. Remember that this list is by no means complete and there are still many other words (al, dan, dus, ook, nu eenmaal, zeker...) that could belong here.

Mastering modal particles is a pretty hard challenge and, as far as I know, not many non-natives get to the point of using them consistently. Steady practice is, as always, the only way to succeed, so don't give up and keep an eye open for these little fellas when communicating in Dutch!

(4) This Eudu.eu page - this is probably the best source I found on the matter, it has tons of extra examples and helpful hints, so... ga maar even kijken!

I missed this originally because I wasn't very active in the discussion, but this is very useful for me, it could well help me patch up some holes that are stopping me reading Harry Potter

I can't believe that after two years, this page has only eight upvotes and a single comment. It's definitely extremely useful.