Arabic on the horizon?

I need to pick up some Arabic for a business trip in a couple of months and I am curious if there is any news of Duolingo offering it in the near future. Does anyone have any idea? In the meantime, is there any program out there that folks are using for learning Arabic?

Thanks for the help!

There is no course in the works, and even if there was, courses can take up to two years to be released into beta. My suggestion would be to do a search for a website that offers lessons in the specific Arabic dialect spoken wherever you are doing business; on the heels of that, get a language tutor on italki (minor cost) or Skype Mixxer (free). Start as soon as possible. Last but not least, good luck!

Duolingo doesn't have Arabic, but Memrise does:
https://www.memrise.com/course/1325837/arabic-1/

Also, Memrise has other user created courses that cover different Arabic dialects (not just MSA). Those might also be worth looking at, depending on which country you are going to.

Thanks for this, I am definitely going to use it in the meantime.

You could try doing the reverse tree. Take English from Arabic.

Why not just buy an Arabic language book that actually teaches you from your native tongue, or borrow one from the library, or pirate it off the internet if you're broke. You'll learn faster than trying to guess at how to do it.

Hello goosewatcher, I don't think that Arabic will be on duolingo soon, but I suggest you these websites to learn Arabic :

I hope to be helpful and good luck

In addition to those, I would recommend the following:

Arabic Resources
This links you to a WordReference page. WordReference has several language forums to include a couple for Arabic. They're probably not all that helpful to the absolute beginner, but if you ever have a question about the Arabic language that you can't find elsewhere, consider posting a question in this WordReference forum. It has some extremely knowledgeable members who should be able to help you out.

Another resource that may not be all that helpful to the absolute beginner but one that may be helpful to someone who has had at least a year of study at the university level (or its equivalent) is a site called "Arabic Language Lessons." It's a site dedicated to a book titled, All The Arabic You Never Learned The First Time Around, and I can assure you from firsthand experience that it is very aptly named. Though I've never held a copy of this book in my hands, nor have I confirmed/corroborated its publishing details, it appears to have been published by the Defense Language Institute's Foreign Language Center. In addition to filling in a lot of missing gaps, it will also help take you to the next level when you are ready to do so.

The Al Jazeera link and the arabicsl.com link were bad links for me. If this was your experience, too, try the following instead for the Al Jazeera site:

With some effort, I was able to see what http://www.arabicsl.com/ had to offer. It looks fun, but it's going to immerse you in Arabic a bit more than what might be comfortable for some learners (i.e., everything is written in Arabic and you click on various images to get the English) and it is definitely designed for children or those who like cute, cartoon-like images. (See the image below for an example.) 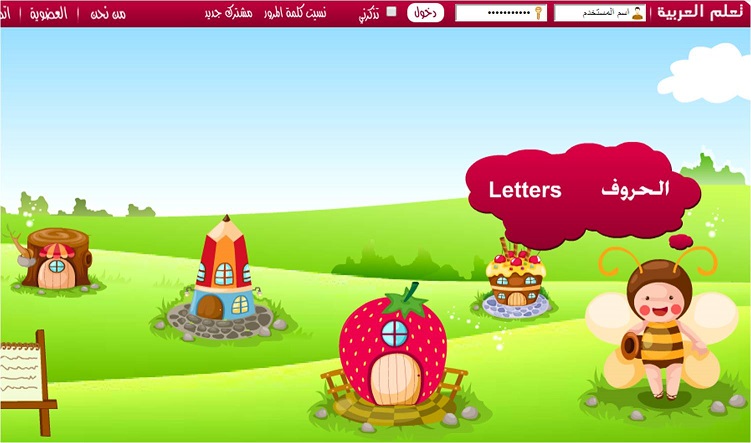 But like I said, I wasn't really able to access the site fully and initially was directed to one of those sites that tells you where the name is registered.

Be that as it may, Duolingo, as someone has already mentioned in this thread, does have English for Arabic speakers. I've tried it. It's a bit difficult to get used to if you're a native English speaker, but it can be done.

And if you're not up for that kind of challenge, as of February 7, 2019, the often requested and anticipated Arabic for English speakers is at 68% completion and is scheduled for launch in just a few months ... May 1st to be exact. If you're interested, you can even sign up to be notified when it's ready.

I'm one of the contributors in the (English for Arabs) course, here's what we know so far about the much anticipated Arabic course:

1- Few months ago Luis (CEO of Duolingo) had an open AMA on reddit where he was once more asked about an Arabic course to which he answered "At some point, yes"

2- Duo staff expressed to the moderators and contributors of the Arabic courses that they're pretty interested in having an Arabic course, and that the main barrier is the limited resources they can allocate to invest in the technical foundation needed to support Arabic as a language.

3- In the last couple of months Duo engineers have been allocated for that very reason. We don't know what has been accomplished so far but we do know that Duo now is better in teaching different scripts (than latin), perhaps Japanese is the result of that.

4- To encourage the staff to start the course, you can upvote this topic, it's already the 4th most popular topic in the history of Duo, and Arabic is the 2nd most voted language.

Dear Ahmad, so when will the course Arab by English be released? Is may 1st possible ?

Nope, I checked, still under the horizon!

This blog post by an Arabic course creator asks for people to leave their email address if they're interested in a Duolingo-style course. Perhaps they're planning to make something similar. http://arabicreadingcourse.com/totallyarabic/2016/08/25/why-doesnt-duolingo-offer-arabic/