If you know about Akatsuki, then it's easy. "aka" for red, and "tsuki" for moon.

While "akatsuki," when broken up, literally means "red moon," the word itself means "dawn." 暁

This is why I love this language. It makes sense that a rising sun at dawn resembles a red moon. Such poetry in the Japanese language... beautiful :)

What about aka from Akamaru? :D

Ahaha I once thought it is Aka (red) + tsuki (like), they like red, the color of blood

So that's why the guy from a silent voice misunderstood Nishimiya, he thought she said tsuki (moon) but she meant suki (like) thats crazy

When the word 'aka' (Red) works as an adjective then it is used 'akai' .

Thanks I was wondering that myself, but when would red be used as something other than an adjective?

You can use it as a noun.

Maru is just a common ending for boys names in Japan. It means circle or perfect.

when i type 赤, it corrects it as 垢. I tried telling them it was mistaken but it seems that reporting options aren't as refined on desktop vs mobile

I'm trying to figure out if the company Akamai has a meaning in Japanese.

Is it a Japanese company? If yes, then maybe. Otherwise, prob just coincidental.

Probably not, the majority of names in English, French and Italian does not mean anything. Though there is a possibility since Asian countries have different cultures and grammar etc

Wait...I thought akai was red...That's what most people told me, and plus, this is in beta, so...Is it incorrect?

aka works as a noun, akai works as an adjective. Same for ao vs. aoi, etc. :)

I remember it thanks to Akame Ga Kill, which translates as "Red eyes assasin"

So apparently, writing Aka in Kanji is wrong...?

Listening questions are automatically generated from the source sentence and contributors are unable to add multiple answer options to them. Since this question is from the hiragana skills, hiragana is required. Kanji is acceptable on the translation questions.

I think of Akamaru because he turns red when Kiba gives him food pills. Red is also in his name but I'm not sure what "maru" means.

what does akane mean?

"madder" - a plant used to make red dyes, also refers to the dark red color itself.

Akagami shanks from one piece
so gami is hair :D

Red is aka or akai? Which one should i use in general??

HELP Me understand why there are two characters for one word, what does each character mean then? A character is a word ? Or a letter ?

Hiragana are like letters. They don't have any meaning on their own, they just represent sounds. あ is "a" and か is "ka". あか is read as "aka" and is a word meaning "red". If you take the same あ character and follow it with お (o), you get the word あお (ao) which means "blue". I hope this helps.

Why is 赤 a wrong answer?

Was it a "type what you hear" questions? Duolingo wasn't designed for languages that can write the same thing multiple ways, so it only accepts one specific answer for those questions and marks other correct answers "wrong".

Is けんじ ke n ji btw it is my friend's name

Also what do you call Japanese letters, letter, symbols or something else : 'a' is a letter and 'あ' is a what?

Then you have Kanji 漢字 (lit China-character) which is the writing system adopted from Chinese used in writing most noun, adjective and verb bases. Each kanji can have multiple pronunciations depending on context. These pronunciations in a dictionary will typically be written in Hiragana for their native Japanese "Kun-yomi" (lit. meaning-reading) and Katakana for their Sino-Japanese "On-yomi" (lit. Sound-reading)

あ is a kana, specifically a hiragana, for the syllable "a"

Thank you for this concise explanation. I've printed out a copy of this to keep by the computer while I'm taking the Japanese lessons.

A very good answer; that being said, technically, a "letter" is not necessarily restricted to belonging to an alphabet. You can very well call kana a "letter" (文字【もじ】), or even a whole kanji. If you want to be more specific, then you can specifically say "kana," "syllabogram" or whatever strikes your fancy.

How do i know aka is red? How can i deduce that?

If it's a "write this in English" question, you can click the Japanese and it will open a dictionary-style entry for the word that should give you the answer.

If it's a multiple choice question, you can check all the options and see if there are words you've already learned, which you can eliminate, but sometimes you just have to guess.

why doesnt 赤 get accepted?

If it was a "type what you hear" question, the contributors have apparently said that they won't accept kanji for those types of questions in the Hiragana skills because we're supposed to show that we understand the hiragana.

So, each symbol has its own meaning and with others it changes to another? Because I remember that a shadow means one and with another symbol it meant .... I don't know .... Kangaroo, for example.

Each kana represents a syllable, these syllables are combined to create words, much like the individual letters of the alphabet in English.
Some words can also be just a single syllable, just as "i" is both a letter as well as a first-person pronoun and "a" is the first letter in the alphabet but is also a singular article, etc.
Adding another syllable changes the words meaning just as adding another letter would create a new word in English. "a" to "an" to "ant" to "anti" to "antique"

Download a Japanese keyboard or you can use the word bank: 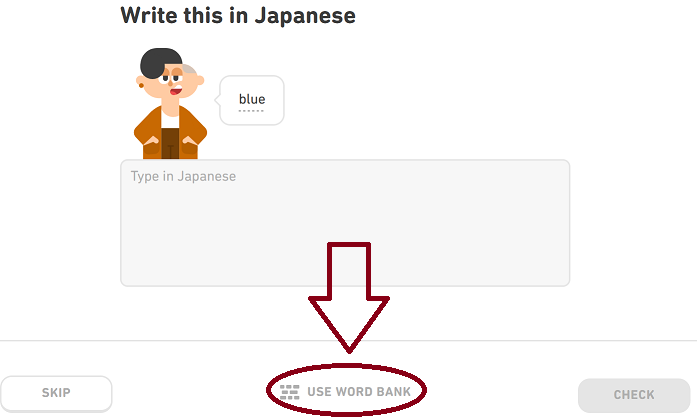 Is this word related to the English "ochre"?

No. Aka means RED. A completely different colour.

Yes, I know. But that doesn't mean that the two words can't be related. Ochre can be quite reddish.

Yes ochre is one of the many shades of red