Translation:Will you use a chair?

80 Comments
This discussion is locked.

Surely "are you using the seat?" should be valid too?

Oh..so thats what it meant? I was really confused with the phrase

Imagine you're playing Skyrim, you're in an inn and you point at a chair and "[E] Use" shows up, and then you press E to "use the chair" which means just sitting on it.

I'll give my fellow skyrim fan a lingot

That would sound more natural....this sentence sounds odd to me...

Yeah, its a bit confusing at the moment because you haven't learnt about 'te' form yet. That is how you differentiate between 'I use a seat' and 'I am using a seat'. Unfortunately Duolingo is really bad at introducing new concepts.

True. The te-form would make it clearer that it is progressive or -ing form in English, but the problem is that masu can be translated into progressive tense too. Since there's not context, it can be taking as either: Are you using the chair? (which generally sounds more naturally/instinctive for an English speaker) or Do you use chairs? As Goren points out the latter makes more sense from the Japanese speaker’s perspective.

I think the -masu form (when talking in present) being translated into progressive tense just comes from the fact that many things happening in the present can interchangeably be expressed in present simple or present progressive/continuous, also in English. But I would try to keep them as they were in Japanese, at least in Duolingo. There's also an additional complication: in English, progressive form can also be used to indicate future (which is represented with the -masu form in Japanese). Being especially aware of that will probably be useful when trying to translate into "what feels natural" in English

True, you get this issue in French as well. Just b/c French has a progressive tense reserved for now (...en train de...) doesn't mean it is used for the 'now' action. (I am sleeping now = Je dors maintenant) Even English, which tends to more strictly reserve present simple for habits, routines or general states, often strays in colloquial oral English (Eg I'm working on Fridays, I'm working way too hard each day)

I understood the phrase as something like "do you use chairs", which I think is a valid question, because not everyone in Japan does…

Neg. That would take a progressive verb form, I believe...I think they should have just not used this sentence.

Do you use chairs? No, I always stand, everywhere I go.

To be fair I always thought those sentences were great for showing grammar through funny sentences.

31 hours of work, followed by a 24 hour party...all without chairs.

In Japan I use zabuton more than chairs.

That kanji "椅" was of a classification that could not be used for official documents until quite recently. (It was added to the common-usual kanji (常用漢字) defined by the government in 2010)

Many of us still write in hiragana "いす", or katakana "イス". (especially in hand writing)

No one says 'Do you use a chair?' Duolingo please fix that

It doesn't matter if you use the phrase IRL, it's just teaching you the words and grammar.

Will you use a seat?

After thinking for two months, if the situation is like, if you see someone trying to take something from the top of the cupboard, does it sound more natural to say "Will you use a chair?"

"Are you going to use a chair?" sounds more natural, but "Will you use a chair?" is grammatically correct. I think your sentence comes across sort of stiff and implies something that will happen in the future. It would feel more appropriate to ask "Will you use a chair" if you were having a discussion with your friend about how he is going to try to take something down for a top shelf later on, rather than in the moment.

Do you use a chair to beat people?

Thanks for asking good sir. I certainly do

I'd love to try. Using the chair... not beating people with it (Of course I'm a good person). And I definitely won't kill anyone with the chair.

Floating isn't on the list, don't get me wrong. =}

Disabled people do when we talk about wheelchairs..

Yeah I thought that's what it meant. "Do you use a (wheel)chair?"

I think "do you use the chair?" is valid right?

Will you use a chair? Or a step stool?

Why not? I often prefer to sit on the floor.

…to hit people in the wrestling ring?

Anyone know what this meant to mean? And why are we suddenly learning so many new verbs???

つかう means "to use", so the sentence means "do/will <someone> use a/the chair?> "will you use a chair?" would be valid for example at an event where there is a pile of chairs that people can use to sit, and you're going to get one, so you ask your friends if they're going to use one

*so you get one for them :P

I have the same question!

Sorry for the unproductive or no informative reply

I'm thinking it would be more like "is this seat taken?"

you can use both of these:

この席は取っていますか？ (Is this seat taken?)

この席は使っていますか？ (Is this seat used?)

Why 'a' not "the" accepted, just curioua

I think it should. Will report it

I do not use chairs. I engage them in mutually beneficial activities.

I translated this as "will you use a chair?" and it was accepted. The Japanese sounds to me like someone is offering you a chair in an indirect way. They're asking if you want to sit down.

"Do you use the chair" is wrong. Does Jap differentiate between definite and indefinite articles?

Short answer: no. No articles, and no plurals. You're supposed to pick it up from context.

Anyone notice this app's weird fascination with chairs?

Why doesn't this sound natural to people? People ask it me, if I'm sitting on the ground for a while in a place with chairs.

I will use a chair!

I thought かいますmeant to buy, but it also mean to use?

My guess was "can I use a chair", which is wrong. But how would you actually say this in Japanese instead? I thought the "I" was implied if not otherwise stated?

Can/may I use a chair?

Great, thanks a lot for your reply. This is still a bit too tricky for me for now, but it's coming!

I read this entire section and I'm still a bit confused. In English, we don't really use "use" in this way (at least, where I'm from.) If we're asking if someone wants to "use a chair" we're more likely to ask "Will you sit on a chair?" That's not what the words in the Japanese sentence translate as, though, so I think a better question to ask is the following: How is "tsukai" usually used in Japanese everyday speech? I know it means "use" but is that in place of other verbs such as "ride" "sit" or whatever else? For example, could I say "I use the cat" instead of "I pet the cat?" Or, "I use the tree" instead of "I sit in the tree's shade?" How far does "tsukai" go? And is how a thing is being "used" implied, like the subjects of Japanese sentences?

And in such sentences, were is the emphasis? On the object or the action? If, using this sentence as an example, the intent is to ask someone if he or she sits on chairs as opposed to sitting on the ground, the emphasis should be on "chairs." Perhaps because the wording is so strange in English, my mind puts the emphasis on the action, "use." So the question in this case would be wondering if the person does anything at all with chairs, as opposed to asking about what the person's preferred sitting device is.

I'd legitimately like to know the mindset behind this sentence construction.

Did they leave out the wo/o sound in the audio clip?

given we are doing a transport module. I tried "will you use a seat ?" on buses and trains we don't call them chairs in English, we call them seats. DUO wouldn't accept it. was it actually wrong ? what have chairs got to do with transportation ?

There's a lot of crossover in Duo categories; for whatever reason, chairs seem to show up in a lot of them. I wouldn't overthink it!

Strange wording, but i think it is still an okay sentence

No thank you. I will sit Japanese style. 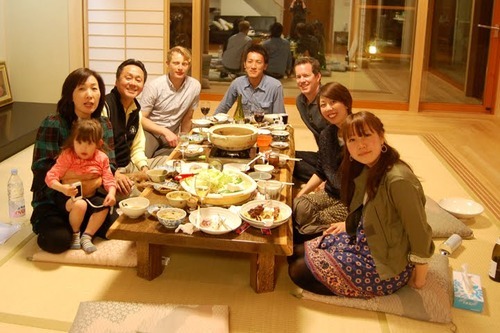 You may think it's funny, but that's why you would ask this.

That brings back so many memories

how about "need a chair"

I am confuzzled... actually I understand. Is it supposed to be 'Are you using the chair?'

No. the continuous tense would be つかっています. You would be indirectly asking if they wanted a chair.

If i was on a bus, i would more likely to say 座ってみませんか？(would you like to sit down. )

Saying 座ってみませんか (suwatte mimasen ka) sounds like you are in a store and the clerk is asking if you'd like to try out a new kind of chair. If you wanted to offer someone a seat, I think よかったら、どうぞ (yokattara douzo) is pretty standard. This Japanese sentence isn't trying to offer someone a seat, though, it's just asking if you will use a chair (maybe you're sitting on the floor, maybe you are trying to reach something high up and standing on a chair would get you there).

This is such a weird sentence