How come in the French "Tips and Notes" for the very first lesson, it says,

Whenever you want to learn a verb's conjugation, hover your mouse over that word and press the "Conjugate" button. However, when I go to do just that, it doesn't appear at all. 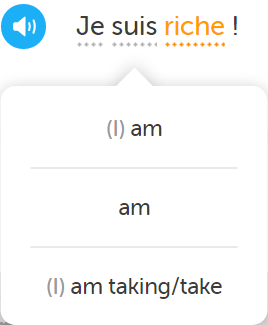 Originally, I was thinking this was a French exclusive bug. However, when I went to check Spanish lessons, they also no longer have a conjugate button. When I started my Spanish lessons in late March, they did have a conjugate button. But then I did notice it disappeared, but I only thought that it was because they were not present tense verbs. Apparently though, this is not the case, which I found out recently: 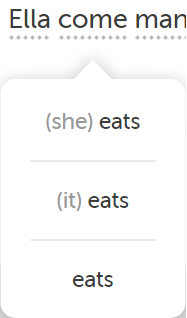 Can someone please explain why this is happening? Or when it started happening? I understand that you can still find verb conjugations in the "Words" tab, but I miss having access to all the verb conjugations mid-lesson. After looking at forums a bit, I noticed that something similar happened around 2 years ago due to a bug. I hope this is similar.

I don't believe it's a bug. As far as I know, the in-lesson conjugations of verbs has been permanently removed since a few months. As you already indicated, the only way you can still get the conjugations is through the Words tab.

No, I don't know the real reason, but I'm guessing that when they need to make updates to the website, they look at what works well and what doesn't, etc. You may have also noticed that they took away the flashcard function available under the Words tab in some of the language courses (Spanish, for one). They took that function away in the recent website update, in favor of getting people to use their new flashcard service called Tinycards.

Yeah, as a matter of fact, I saw that you actually replied to someone who was wondering where flash cards went. Maybe they did remove it because of Tiny Cards. That's disappointing if that's so, but I understand the removal of flash cards. I wonder what other stuff they have removed/going to remove soon that I haven't even realized yet :/

Off topic: Why was my reply given a thumbs down? Was there something wrong with it?

Anyways, thanks for responding. Have a lingot.

I don't know why your reply was downvoted (maybe someone who doesn't know what the up and down arrows mean, or just a notorious downvoter?), but to answer your other question, they also removed the Activity Feed, which allowed you to interact with other Duolingo users by writing messages on each other's activity streams. Supposedly, the activity feed was slowing down the website and costing too much to maintain. I hope this is it as far as the website update is concerned because it's bare bones enough now.

Funny thing about the activity feed. I think literally a day before they removed it (I was still fairly new at the time) I got a notification that someone posted a really nice message but I couldn't reply, so I felt so bad haha. For real though, the activity feed removal is kind of bad, because the only way to report Tips and Notes errors is to post on the activity feed of the guy who makes them. Meaning, you can't. I think that's really silly and unprofessional. They should at least maybe make a "Message" option, though that might still be too hard to manage.

June 14, 2017
AboutDuolingo English TestMobileGearHelpGuidelinesJobsTermsPrivacy
Learn a language in just 5 minutes a day. For free.
Get startedLogin