Translation:No, there are no pets.

Why cannot we say "It is not a pet." in this case?

I do not see any there phrase.

"It is not a pet" (i.e. it is something else than a pet) would be ペットはじゃないです.

The last word above is not to be confused with あります ("there is" for non-living things) and it's negative form ありません. Well, it certainly confused me. ;)

...is there a better way to phrase "there's not a pet" because it felt really weird/awkward

I put "No, I don't have pets" and it accepted that.

But it didn't accepted: No, I haven't got any pets.

Most ppl dont want to deal with double negatives, especially while learning/teaching a language

Probably because it's not correct grammar.

It sounds like you stole a pet, and your hiding it

You could say "there is no pet" or use the plural "there are no pets".

"There is no pet" singular
or
"There are no pets" plural

Shouldn't "it is not" be ではありません? I'm sorry if I could be mistaken

You're right, it could be ではありません (dewa arimasen) or じゃないです (ja nai desu), but "wa ja nai" is not correct.

Is it correct to say (ペットでわない)?

The exact translation is "no, pet does not exist." which translates more "to there is no pet" in general instead of pointing something out as specifically "it is not a pet". I hope this helps.

I used 'I do not have a pet,' because from what I've seen, usually when no one is specified, its considered to be talking about one's self. I believe that's closer to what they most likely mean.

I thought we were supposed to use が with ある/いる verbs.

Yes, generally you do. That's because が indicates the subject, or the thing which does the verb.

However, as Tanja rightly points out, は is often used with their negative forms to add emphasis.

I read in another comment section that はis used with their negative forms. It's news for me too!

"No, There is not a pet" is an unnatural sentence. "No, I do not have a pet" is a better (If less exact) translation

ペットはいません is common Japanese for "I don't have pets", just like かぞくがいます means "I have a family". ペットは持っていません sounds much too literal, like "I'm not holding a pet".

Anyway i wrote "no, I don't have pets" and duolingo marked it right, so it accepts both translations

Actually for actually having and owning pets its 飼っている

In fact, just using いる is probably the more natural of the two. The connotation of it is that you consider your pet as part of your family (because that's how you would describe your family members), so it seems more endearing than 飼っている which seems to emphasize your responsibility (as the owner) for the pet. I might be reading a little too much into it since I'm not a native speaker, but both verbs are equally correct.

Sure people will understand you but using いる/ている isnt more natural. Every japanese person around me uses 飼っている for owning a pet and not just saying there is a pet.

I have to say in my case people usually use いる with me, but those people are usually elementary school aged children, and I don't know if age makes a difference in their word choice.

Because in english, living things are stated in plural by default.

So, 'that is not a pet' would be 'peto wa dewa arimasen'? Apologies for the romanji.

Minus the first 'wa', you are correct.

I thought it would be "imasen" because at pet is a living creature?

Aye, いません is used for living creatures, but with ペットではありません we're talking about something that is clearly not a pet. (says so in the statement after all!) :)

Jokes aside, ペット is a regular noun with no 'living or dead' distinction required in this case. ではありません is the formal negation of です, which is the auxiliary verb "to be" (i.e. "to be something", not the existential "to be or not to be" kind). So the positive version of this sentence, "that is a pet", would be ペットです, not ペットはいます (since that means "there is/are (a) pet(s)").

I thought that you could only use が with います and あります.

You can only use が for います and あります, and not を. However, は is a bit of an exception, because it can indicate the topic and fulfill the grammatical role of a particle it replaces, which you can do for emphasis. We've seen this before in other exercises, like おちゃはのみません.

So in this case, は is kind of は and が at the same time.

thank you, you've earned my lingot

I'm not sure I'm understanding this correctly after reading what others said, but from what I was taught growing up and in school, you can only use います if the subject is a living thing (animal or human) and あります if it is inanimate. Therefore saying ペットはありません kind of sounds like you are saying your pet is dead or imaginary

Yup, you're mostly right. As a general rule of thumb the living/non-living divide is pretty close to animate/inanimate, but it's not quite the same.

います/あります follows the animate/inanimate line of thinking, so things like plants (which are living but inanimate) use あります, and zombies (which are animate but non-living) use います.

However, rather than sounding like your pet is dead or imaginary, ペットはありません just sounds ungrammatical because anything you would have as a pet is generally animate (or would be described in an animate way, e.g. a pet rock).

Hmmm. Following logic from this, can this also mean that 'I have no pets'?

Yes, it could mean that. But it could just as easily go the other way too, i.e. ペットはいますか = "Are there any pets?"

It all depends on the context, which carries through from question to answer.

How i can say "I don't have pets" in japanese?

Although it's not incorrect, that has the implication of "I'm not carrying a pet with me right now". It's similar to this example:

To say "I don't have a pet" and mean "I don't own a pet", you could simply say the exercise sentence (ペットはいません), or to be more specific, you could say ペットは飼(か)っていません, where 飼っていません means "to not currently keep/feed (an animal)"

I don't undersand, why to use the particle は and not が?

It's not something you need to worry about too much as a beginner. Suffice it to say that が (usually) indicates the "subject" or the "doer" of the verb in the sentence, and は can also do this to add emphasis (by elevating the "subject" to the "topic" of the sentence). This often happens for negatives and questions.

If you really want to find out more, check out Tae Kim's Guides among other useful resources on le Google.

they should allow "there are no pets" on its own...

I put that also, without the "No" at the beginning and got it wrong.

The Japanese is a person presumably answering a yes/no question. "No, there aren't any pets." When you don't translate the いいえ, you're changing the meaning of the sentence.

No, there aren't any pets.

There aren't any pets. / There are no pets.

"no, there's no pets" is wrong. Did my english fail or Duolingo did?

Pets is plural, so the verb is "are" instead of the singular "is". "No, there are no pets."

Where would you use this sentence? Is it usable in terms of "no pets allowed (in this hotel)"?

No, the notion being allowed/disallowed isn't part of this verb, only whether pets exist or not.

The most basic situation you would use this sentence is in response to the question "do you have any pets?"

I remember that "は" means that the Pet is the objective, then why wasn't "no pet is there" accepted?

No, は indicates that "pet" is the topic of the sentence. Arguably though, "no pet is there" is a pretty close translation for ペットはいません, which I would probably accept.

However, the sentence in this exercise is 「いいえ、ペットはいません」so you would have to say "no, no pet is there", which makes it sound considerably less natural in English.

Why won't it allow "there's no pets"? It's actually far more common for natural English speakers (like myself) to say that rather than "there are no pets" smh

For me as a native speaker, if the sentence was something like "there's no pets allowed", I hear what you're saying, but to say "there's no pets in the house" sounds wrong to my ear, which would be more the context that this sentence is using. Maybe we speak different dialects.

Could this ever be interpreted as, "Pets do not exist?" Or, to be more realistic, could someone say, 「エイリアンはいません。」 and be understood to mean, "Aliens do not exist?"

When I clicked the first いin いいえ to check what it is, there were 3-4 references-No, May I, Do you, and something else too but I'm not too sure. いいえ means no, then why ''Do you'' is there ?

The hints are automatically generated and Japanese doesn't have spaces, which makes it difficult for Duolingo to recognize where a word starts or ends. If you look closely, there is often a thin gray line that tells you what part of the sentence the hint is for. For example: 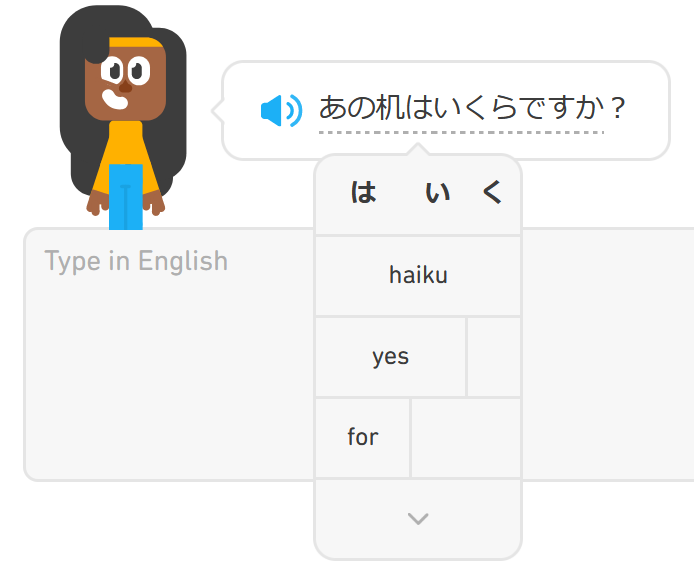 In this hint, if you follow the gray lines down, it defines はいく as "haiku" (the poem), はい as "yes", and は as "for" (one definition for when は is being used as a subject particle). You have to look at the sentence and the context to figure out how to break up the words. You can also look at the hints for the other words, which might be more clear and only have one suggestion. In this case, if we looked at the hint for く, it would show us that いくら means "how much", so we could figure out that the は was not part of a poem or the word yes, but is being used as a particle.

So if you followed the gray lines down in your case, the hints were probably not for いいえ, but for いい.

ペットはいません uses the verb いません, the negative form of いる・います "Exist" (animate)
"I do not have pets", "There are no pets" or more literally "Pets do not exist"

I said " i don't have pet"( in singular) and it didnt accept but then I changed the end to pets. It was marked right. Does someone have any idea why that?

"Pet" is a countable noun so you would need an article in singular "I don't have a pet"
Without an article or a plural s at the end it is unclear what meaning was intended so Duo marks it wrong.

is it acceptable if i answered; i have no pet ?

is it acceptable if i answered, i have no pet?

Why "I dont have pets" Didnt accepted?

Nooo, not the pets!

I wrote, "No there's no pets". While the English grammar is not technically correct, why wasn't this accepted?

the English grammar is not technically correct

No, there are no pets.