50 Comments
This discussion is locked.

What's the difference between tooi and tooku?

In this sentence, とおく is a noun instead of an adverb. Therefore it follows に to represent the destination of 行く.

It can be an adverb and a noun?

So this would be the equivalent of turning "soft" into "softly" for instance?

"fast" has been an adverb in English for approximately 800 years at least; the relevant adjective sense developed from the adverb centuries later

So if I understand correctly, not being something is a verb in Japanese?

And how does this work in this case where you have to "go far"?

I'm not sure what you are saying. But there are two groups of adjectives in Japanese. One is group is commonly called 'i' adjectives or "true" adjectives and usually end in -ai, -ii, -ui, -oi - some examples - akai - red, subarashii - wonderful, samui - cold, kuroi - black. 'i' adjectives can modify the nouns that they describe directly - they don't need any help eg. samui hi - cold day, akai boushi - red hat, subarashii geemu - wonderful game, kuroi inu - black dog. The other group of adjectives are called 'na' adjectives and they need 'na' to help them modify the nouns that they describe - some of them even look like they might be 'i' adjectives like kirei - but don't be fooled! Some examples - shizuka, kirei, suteki, rippa. shizuka na kodomo - quiet child, kirei na niwa - pretty garden, suteki na shaatsu - cool/smart shirt, rippa na sensei - great teacher.

I like this explanation--I hope there will be more of this in the course content itself as the beta process continues.

Glad I could help.

I like it too, this was really good. Thanks a lot

You are amazing thank you!

To continue AnaLydiate's excellent explanation, since you asked about negation: if you want to say that something isn't X, you again need to know if it is an i-adjective on a na-adjective. With i-adjectives, you change the -i to -kunai: inu wa kurokunai desu "The dog is not black." With na-adjectives you instead use the negative form of the verb: niwa wa kirei de arimasen "The garden is not pretty."

I haven't learned とおい yet but I'm guessing it is an adjective because it ends in "i".

と is not used as and in this way. And in this sense would be そして.

i said "i am going far away" and it accepted it so i guess they fixed it.

It's not available on the mobile card options.

If you read the other comments and do a quick search on jisho.org, you can see that this can actually be used as an adverb AND a noun, unlike other adjectives that are changed into the adverb form. Here, it is used as a noun, as KeithWong9 has already said. This is a confusing and weird sentence that Duolingo has used which does not make sense given the various other questions this lesson gives.

Could this also be, "go far away"? Like a command telling someone else to leave?

First of all, it is an affirmative sentence. For commanding others it would be 遠くに行ってください/遠くに行きなさい/遠くに行け with decresing degree of politeness. It is rude to say so even for the first one however, and it does not quite convey the meaning of go away.

Nope, this is present tense. For commands you want the imperative form of the verb. In this instance you would assume that the subject is the speaker ie. I go far.

He told me he was just going to fetch cigs at the gas station.. I'm still waiting..

The "correct" translation "I are going to go far away" needs to be removed from the system.

EDIT: Add "I are going to go far" to the list of "correct" answers needing a rewrite.

I doubt "I are going to go far way" was ever considered a correct translation - the English is incorrect. "are" is the wrong form of "to be" to go with "I". There's nothing wrong with the current English translation. If we were going to pick at anything it would be that Duo should really also accept I go far as well. I AM going to go far away is also acceptable.

As they say, a picture is worth a thousand words... 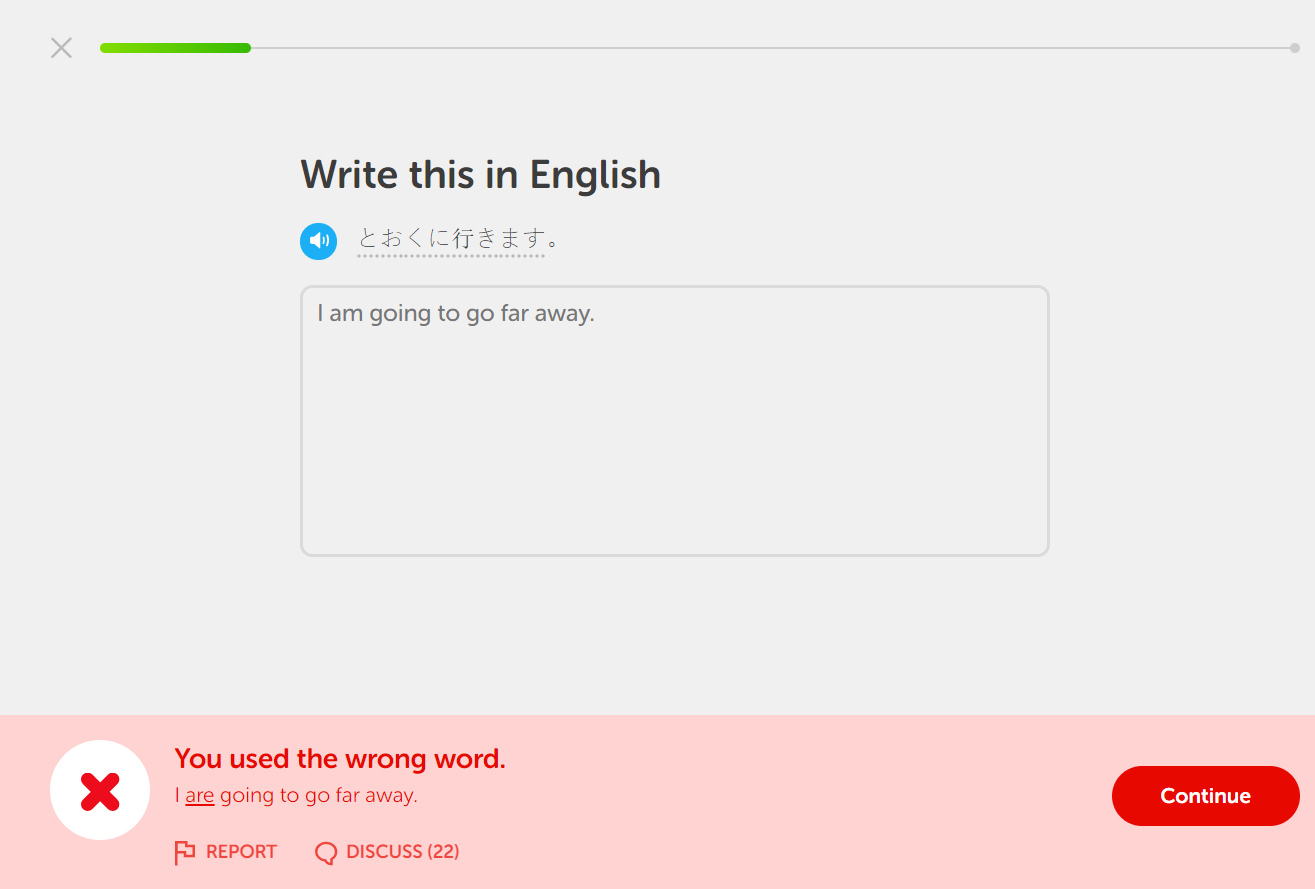 piguy - I thought you were referring to the translation at the top of the page. You are right - Duo's "correction" here is wrong. Also thought we couldn't post images in the comments - hooray for progress! This'll clear up a lot of things because I've often suspected that different Duo users see different things in the lessons - not sure if it is because of the devices being used or browsers on computers but from the comments made it sure looks like we don't always all see the same things in Duo lessons - or at least their Japanese lessons.

PS - hope you reported it. I know it seems like they don't actually read reports or take notice of them but I have had a few emails letting me know that they've read my report and made changes accordingly so they DO read them and make changes. EVENTUALLY.

Yeah, I reported it (both the correct version and that there's an error in what's there now), but having read threads from contributors mentioning that the "Correct answer contains an error" option is too ambiguous to help them (Unsurprisingly, since it doesn't let them know what "correct" answer contains the problem out of the possibly thousands in the system), I also posted here.

good idea! The picture will really help with that! That error on Duo's part is HEINOUS.

How come the answer

Because it doesn't say I will not go far. It says I will go far. I suspect that you are confusing the adverb ending on とおく with the negative ending of true adjectives - in this sentence neither the adverb とおく nor the verb 行きます are negative forms.

isn't it i will go far

So... can any i-adjective be turned into a noun this way?

Is the word for "away" In this sentence? "I go far" Was accepted so i am just curious about the away part

I go far away. Mmm yes

In what context would this be used?

When you want to say that you intend to go somewhere far from your current location.