Translation:Have you been to a foreign country?

Literally this sentence does mean Does The Case That You Went To A Foreign Country Exist? It is asking whether you have such experience. But in English you would never express it in the same way. You would rather say Have You (Ever) Been To Any Foreign Country?

あります can also mean something close "have" as in this case's "have been."

外国 Is neither plural or singular, but both.

"been to foreign countries, have you?" - Yoda

The point is that it's silly to try to translate exactly what you're reading to English based on strict word-for-word translations. It doesn't work. The translation of any given word or phrase should be organic depending on the situation, makeup of the sentence, etc. Any language will be like that.

I think that's the point of literally translating something, to understand what it really means and to compare it to the closest thing you find in your own language.

I meant as the end result. I thought that went without saying, but I suppose I should make it clear.

Yes, you would try to get as literal of a translation, at least at first, to be able to understand what is being said into your native language. But, as illustrated, the literal translation can fall short of making complete sense. Thus, you have to use some amount of interpretation to get the idea of the words being spoken rather than the strict and sometimes impossible word-for-word translation.

OH! That literal translation helped me so much! Thank you!

行ったこと - the case that you went

I like that - thanks. My teacher explained it literally as "the fact of exists". "Experience of" is a much better fit.

I often see this written as 行ったこと

You are right. In this case, using hiragana is correct. More info: https://m.chiebukuro.yahoo.co.jp/detail/q1013194790

This is why many Japanese people mix up past tense and present perfect. There is no verb tense for future or present perfect in Japanese, so the common link here is "experience".

The more you study Japanese as an English native speaker, the more you'll be forced to rely less on English, as they'll be less equivalents....

I would favour: "Have you ever been to a foreign country?"

This English suggestion is totally not idiomatic. I wrote "Have you been to any foreign countries?" which was rejected. But we would always say "a foriegn country" or "any foreign countries" (or "abroad"). Duolingo keeps making it impossible to get a 100% lesson without memorizing irrelevant quirks...

I think 'a foreign country' or 'overseas' would sound more natural

'Overseas' would only apply if you live in a waterlocked country. 'Abroad' is a better expression.

"Have you ever been abroad?" was accepted for me.

There's certainly a slight difference in nuance, but since most native speakers would not ask someone "have you been to a foreign country?", the contributors are more flexible in accepting natural translations like "have you ever been abroad?" (and I assume also "have you ever been overseas?").

"Have you ever been to a foreign country?" feels somewhat more natural to me, and highlights the intention of ことがある more.

what are the best translations for this? the 〇たこと concept is still a little uncomfortable for me

i want to say "Have you ever been to a foreign country" but is that a perfect translation? What are the top 5 best translations for this?

The speaker is asking if you have had the experience of going to a country not your own, so "have you ever been to a foreign country?" is a good translation. In English classes in Japan, ～たことがありますか is taught as "have you ever ~ ?)

My suggestions for translations would be:

What is incorrect about my answer 'Did you go to a foreign country' ?

I think that would be 外国に行きましたか？

You don't need the preposition "in", so it would be "have you been overseas?"

are the two signs after koku ni not read at all? - it says "gai koku ni .. ta koto ga ari mas ka" - so nothing between ni and ta. Am I right?

行ったことがあります(itta koto arimasu) (have (ever) been (to))

Why is singular correct and plural incorrect?

Unless you are being very specific, I think singular sounds more natural

From what we've been taught it should say "Haven't you gone to a foreign country?"

I think the issue with your translation is "haven't". Both "have you been to a foreign country?" and "have you gone to a foreign country?" should be correct, though the first sounds more natural to me when asking someone if they have had the experience of going to another country (see Gymglish: https://www.gymglish.com/en/gymglish/english-grammar/have-been-and-have-gone)

Is the pause in the middle of "行った" ( the double T) somewhat exaggerated here? Or is this example accurate for say, everyday speech?

It's accurate, both in speech and writing. You need to have the double T to correspond to small "っ.” Otherwise, it will be pronounced "いた” which means something different.

It's pretty normal. The length of the pause should be the same length as any other kana; one mora.

For the ようおん, the kana with a small kana attached (ちゃ, etc.), they are considered as a single kana, and are also one mora.

i think "went to" should be an accepted answer as well, it does say 行く

You must not assume the grammar in one language matches that of another. Even if a tense exists in both, they may not even be comparable in normal use. Verbs may be different, especially auxiliaries, and whole words can disappear.

Traditionally in English, went is in the simple past tense and would not be used here. Gone and been are participles in the past perfect tense. Being participles, they require an auxiliary, in this case, have.

While it may seem then that went and have been mean the same thing, the nuance is that the former talks of an action while the later talks of a state or experience. Be, is, after all, existential. Using went makes the statement relative to a specific timeframe (usually only shortly beforehand) while have been is indifferent.

At the risk of comming off as a prescriptivist, I will say that while it may be perfectly normal to say "have you went" in some parts, it is not standard. It may be of interest to note, if only for illustration, that went is derived from an entirely different verb, wend, and not from go.

Arsuru, unfortunately I can't find a button to give you lingots on the phone app, but if I could I would've given you some for that perfect answer [of which the first part in particular applies to a lot of comments on Japanese course questions]

Why thank you! It is the thought that counts, right? I've more lingots than I'll likely ever use, so don't worry about it.

The app sure is silly like that though; all get and no give, no timestamps on comments…

I'm just impressed you read all that. I got bored once I realised there was a second sentence

Don't know why you're being downvoted, you are correct. "Went" is the past tense of the verb, but when we use it with "have" we have to use the past participle, which is "gone". 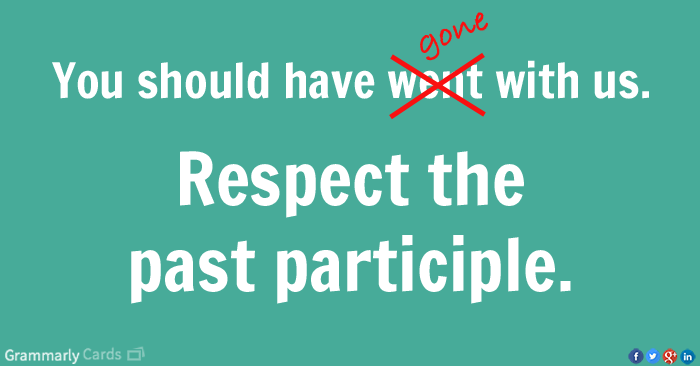 If you aren’t sure whether to use gone or went, remember that gone always needs an auxiliary verb before it (has, have, had, is, am, are, was, were, be), but went doesn’t.