I'm back - I'm back (home) - the SAME. I think some bitter people just go round Duolingo giving minuses randomly for no reason whatsoever. You can tell this because they never EVER explain themselves - ergo, bored person giving out completely unfounded down votes. かわいそう。どうして あれ が まちがってる と おもってる を くわしく 説明 できれば。。。。

Just a warning, native speakers never say こわいいそう to anyone but little kids to others it's patronising and insulting.

I think you mean かわいそう (native speakers never say こわいいそう, because that word doesn't exist), but native speakers don't avoid it. It isn't inherently patronizing or insulting at all. It can certainly be used that way, but that would be the result of context and/or tone of voice, not from the word itself.

Why is the pronunciation of 'mother' different in this context? Is there a rule that can help me understand when and how words are pronounced differently in such contexts?

That makes no sense

The context of this one makes it seem strange. Is it common to say 'Mom, I'm back' to someone else's mom?

@ivydia's comment, while not necessarily incorrect, is at best oversimplified and not particularly helpful for this exercise, and at worst misleading, as evidenced by your confusion.

When talking to your own mother, anything goes - whatever your family decided on, intentionally or not. Some common ones are ママ, おかあさん, and かあちゃん.

When talking to someone else's mother, they are their own person before they are someone else's mother so, you would presumably address them by whatever name they introduced themselves as (or by their first name/nick name, depending on how close your relationship is). How common it would be to greet them with "I'm back", also depends entirely on your relationship with them.

Also when you're speaking directly to your mother. With father, it is お父さん （おとうさん）

I think they just messed up the audio for the exercise. Wouldn't be the first time. And if you happen to find a rule to help you with pronunciations, please find me and tell me.

Rule for correct pronunciation - there are only 5 consistent vowel sounds in Japanese. へいき

I put Mama instead of Mom, and it marked me wrong :')

"Mama" would be ママ ;) (actually what many Japanese people use to address their mothers) 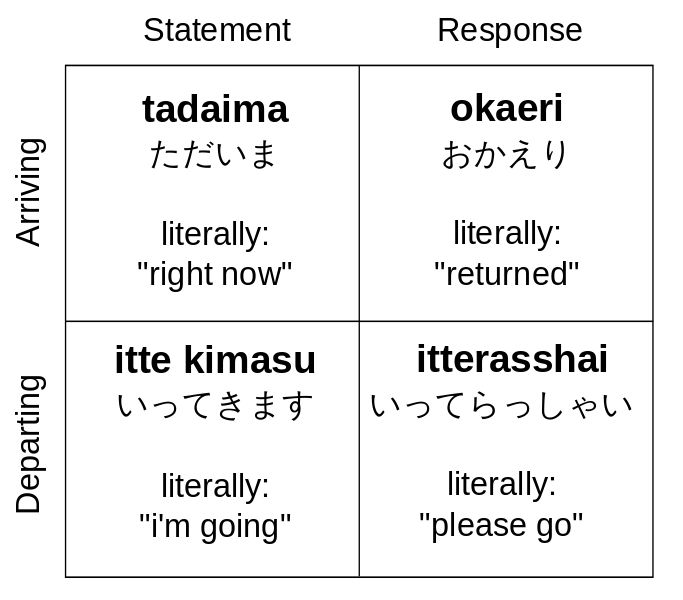 I don't know where you found that image, but I think those supposedly "literal" translations are pretty wrong. The ただいま one is fairly okay, but the rest... lol.

Why is it 'tadaima' and not 'tadaimasu' ? Did I remember it incorrectly or is it different?

Just looked it up in my jisho - looks like it is an adverb not a verb and means - now; at present; just now; soon; in a minute (copied straight from my jisho). It doesn't say that it is an adverb but that is what I have gleaned and I think it's a logical conclusion from the meanings provided.

It isn't a verb. It's two words. The verb that used to be on the end dropped off the phrase completely a while ago.

Wiktionary is very good at explaining these compounds.

I've never heard tadaimasu before (although I'm not an expert here). Tadaima is just a standard phrase you say when you return home, like "I'm back". Same as itterasshai, ittekimasu and okaerinasai. They're not verbs and you don't need to conjugate them at all.

Actually itteirasshai, ittekimasu and okaerinasai are all verbs. itteirasshai and okaerinasai are command forms - 行っていらっしゃい two verbs actually - te form of iku and (stem +) base 2 of いらっしゃる while お帰りなさい is from 帰る and なさる. ittekimasu is also two verbs - te form of 行く and 来ます. Both itteirasshai and ittekimasu mean roughly "go and come back" with the former of course being a politer version. While okaerinasai means literally "Return!" (only gentler obviously) - broken down it consists of an honorific o prefix, stem + base two of kaeru --> kaeri, and stem + base 2 of nasaru ---> nasai - used for polite, gentle commands like kudasai but politer still.

What's the hiragana for 母 in this context? I'm kind of hearing "か" but it might also be "かん"?

Does anyone have a helpful tip for remembering what ただいま、おかえりなさい、行ってらっしゃい、etc mean? I'm having a hard time keeping track...

I don't have a specific tip / mnemonics for these three phrases, but flashcards are generally useful for memorizing tough words / many words at once.

Why is "おかあさん" not acceptable?

So what I wrote before at ただいま alone, that "Just now" or "right now" should be accepted, does not apply here, since the お母さん gives a little bit context.

Although, since this is somewhat shortened for 只今お帰りました, the long version "Mother, I came back just now" might also be an acceptable translation.

Why My mother, im home` is not working?

Do you address your mother as "my mother"? That's what this sentence is doing - calling out to mum to let her know you're home.

I got this as an audio question, the audio stopped at "Okaasan", but fixed when i clicked it again

It is a rough equivalent although unlike Japanese it is perfectly acceptable to refer to someone else's mother as mum/mom in English.

Why is there so much honor terms? Isn't it a little overkill to use お and さん Also I thought that wasnt used with your own parents, cause its like saying Mrs. Mom

Because Japan and the Japanese are highly hierarchical. The way you talk to, or about someone reveals a lot about your status and theirs - it can tell us if you are talking about a close friend or a relative, whether you're a koohai or senpai, whether you are the shachou or an employee, whether you're older or younger than the person you're talking about and whether you are of a higher status than this person or you just think you are. And no, it is not overkill to use both o and san - Japanese is not English - there are levels in society that require that you address or refer to people in a certain way - way you talk to or about people can show your respect for someone or lack thereof. Lastly, お母さん is not like saying Mrs Mom at all. A rough English equivalent of the suffix ～さん can be Mr/Miss/Ms/Mrs/Master BUT not always necessarily - more often than not there is no equivalent and it is left out of translation ie. for instance when you address someone by their first name followed by ~san, in this instance it is not appropriate to translate ~san because there is no English equivalent in this situation - this also applies to お母さん. And as for not using お母さん for your own mother - it is perfectly acceptable to address your own mother as お母さん, just as sometimes you call your mother mum/mom and other times mother. The real no no is referring to someone else's mother as 母.

An interesting thing I found out from watching expat YouTubers is that speaking super formally to people who you are close to is often considered endearing in Japanese culture where in English and American culture it is considered cold and distant. Apparently many long time couples (like married couples in their 80s) use honorifics constantly with their partners where English speakers would use nicknames as terms of endearment

Still, there was a time when in English (or Europe in General), speaking formally even in the family was normal. In my opinion, it was then when "thou" and the 2nd person verb conjugation got replaced by "you" with no special verb form, which until then was only the formal or plural form. By that means, it's weird when English culture sees formal speech as cold while they only have formal pronouns, so they always kind of have formal speech themselves.

There are also a variety of more ore less formal and polite forms in European languages. we just use them without thinking, but in Japanese we notice it because they work differently. English got a lot simplified when the informal 2nd person form "thou" got lost. But still there are a lots of ways of talking, by choosing words (mama, mom, mommy, mother), or the difference between "Do that" (rude), "Please do that" (not much better), "Can you please do that?" (This is not a question, but the polite form of "Do that", and it is like a completely kind different sentence, although it has the same meaning but is not rude). Add the complexity that originally was there...