People have asked me in the past what are some ASL signs for LGBTQ+ terms. So, when I ran into this video today, I was excited to be able to share it. :D (This video is in ASL and provides captions in English.)

Many thanks to Destiny Slater for permission to share their video. ^_^ 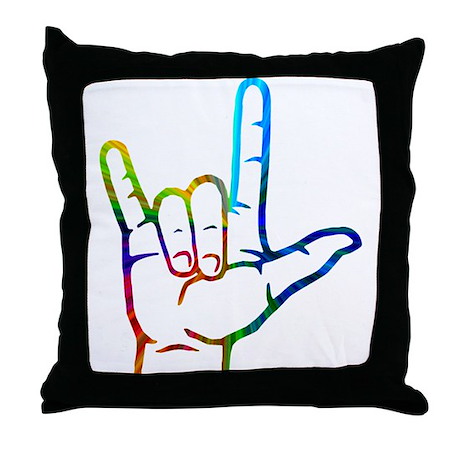 I think several of these signs are regional and used in some generational subgroups within the Deaf Community. I think many Deaf people would be confused by several of them. For example, the sign used for "asexual" literally means "sex fascinating none". The sign for "bisexual" is usually simply signed as "BI" - no need to slide the hand from one space to another when signing the letter B and I - or the sign "undecided" or "on the fence". I'd avoid her preferred sign at the mouth - looks a bit coarse.

Also, the person who made this video signed "gender" with a G hand shape. Most people would be clueless as to what this means. I am guessing this is actually a SEE sign (Signed Exact English - which is hated by most Deaf). Most sign "gender" with an X hand shape - which is also the sign for the word "sex".

Honestly, I wouldn't recommend this video to anyone.

As I read what I wrote about the video, I would like to state that I hope I did not sound as if I were criticizing Destiny Slater. I applaud her for creating the video. The signs she uses may be the ones she uses in her area. I just wanted to point out that there are a LOT of regionalisms and subgroup signs with the Deaf Community. Just because they are different does not mean they are not correct. I was hoping to convey the idea that I have never seen several of the signs which she uses. This is actually common in ASL. For example, a study was done by the US Post Office and it was discovered there were at least 37 various signs for the color gray. None of the signs are wrong - they are simply different.

Where I am from most people will spell out the word Gay instead of using the G on the chin as they find that sign to be homophobic.

Either would be correct. I tend to spell it out myself, as the "G" near the chin also means "beard"...you need to be careful not to confuse the two!

KristenDQ, thanks for the tip!

Not here!! The G on the chin is really coarse. I find that sign insulting. IMHO, it's better to finger spell the word.

kimonocrazy, oh wow! That's the first time I've encountered that regionalism. I know that one of the signs for Lesbian is being fazed out because it is considered crude (at least where I live). But, I've not encountered any resistance to the G on the chin in the local LGBT+ signing community. Though, my access to it is somewhat limited. I like that Destiny Slater put the updated version in this video, which has the handle of the L on the chin for Lesbian.

This is one of the greatest posts I have ever seen in my entire life.

It's also the third moderator post today in total.

Well done and thank you. Usagi you always bring us the best.

July 9, 2017
AboutDuolingo English TestMobileGearHelpGuidelinesJobsTermsPrivacy
Learn a language in just 5 minutes a day. For free.
Get startedLogin