Can anyone kindly explain simply how the iPad Japanese keyboard should be used, its layout and how to know where to find characters from the extended keyboard? Links to somewhere that might do so would be welcomed.

Searches only show how to install it, which is simple enough, but I haven't been able find anything that details the layout, in particular where the hidden characters, such as イ are. By trying every key, I found this behind the い key, but have yet to find many of the others. I can't say which, because I can't type them! :-)

Does anyone have details of the layout or an explanation of in which way the characters are related so I know where I should look for them? It appears everyone, including Apple, assumes that anyone wishing to use the keyboard would already be fluent in Japanese.

I understand this isn't needed, at the moment at least, on the Japanese course. However, since there are no notes or explanations, I wish to create my own in the Notes app; but this is difficult when I can't even find the characters.

It even took me a while to realise that there is no space character, so unlike other language keyboards, it is necessary to switch into English to enter one.

Is the 。 character, the equivalent of the full-stop '.' (en-us period)?

I assume the pop-up extended keyboard: 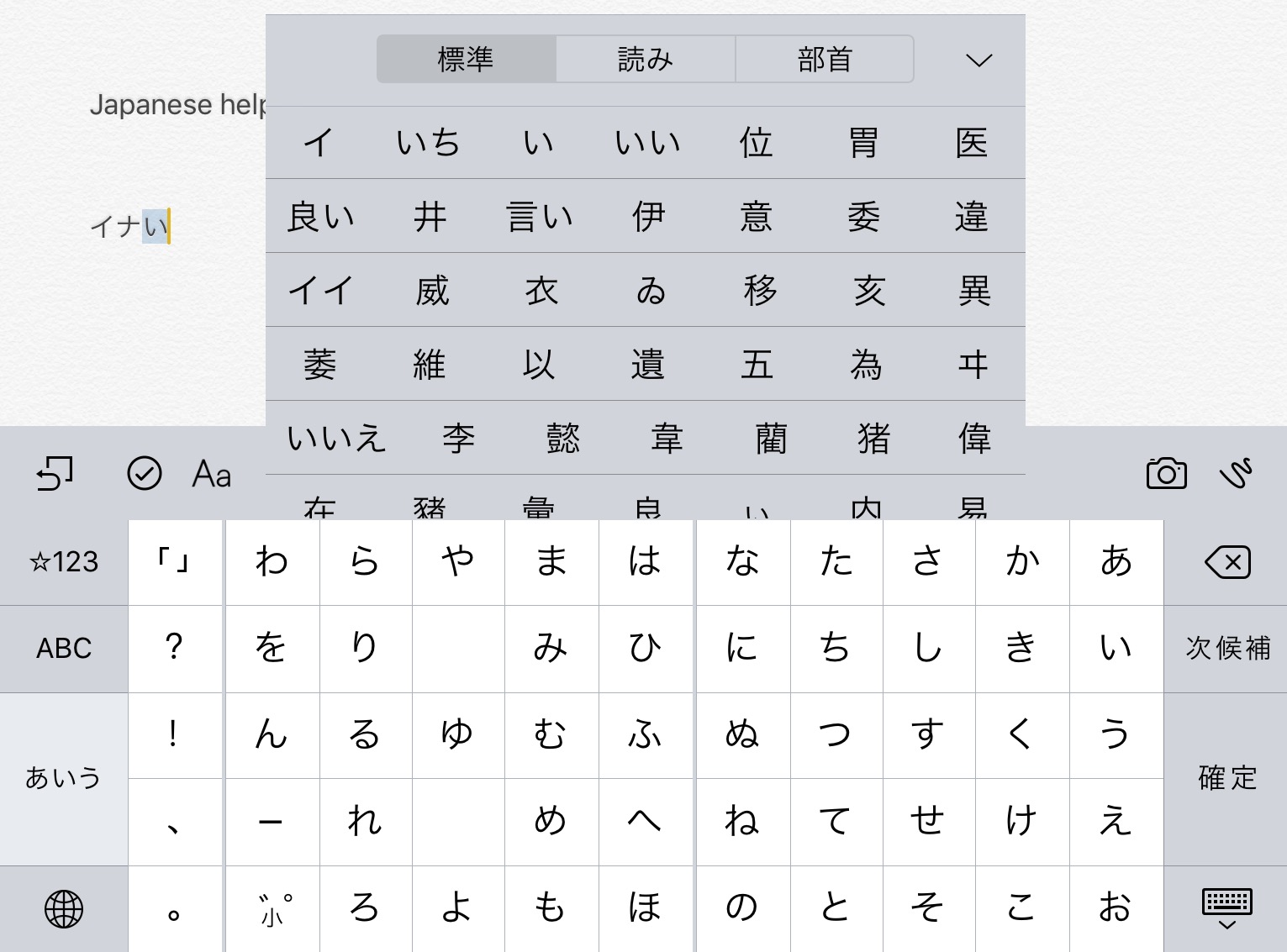 provides the characters related to the original key, but their relationship alludes me at the moment.

This key seems to simply move along the extended keyboard one character at a time, which seems a bit pointless given that one can simply tap it directly: 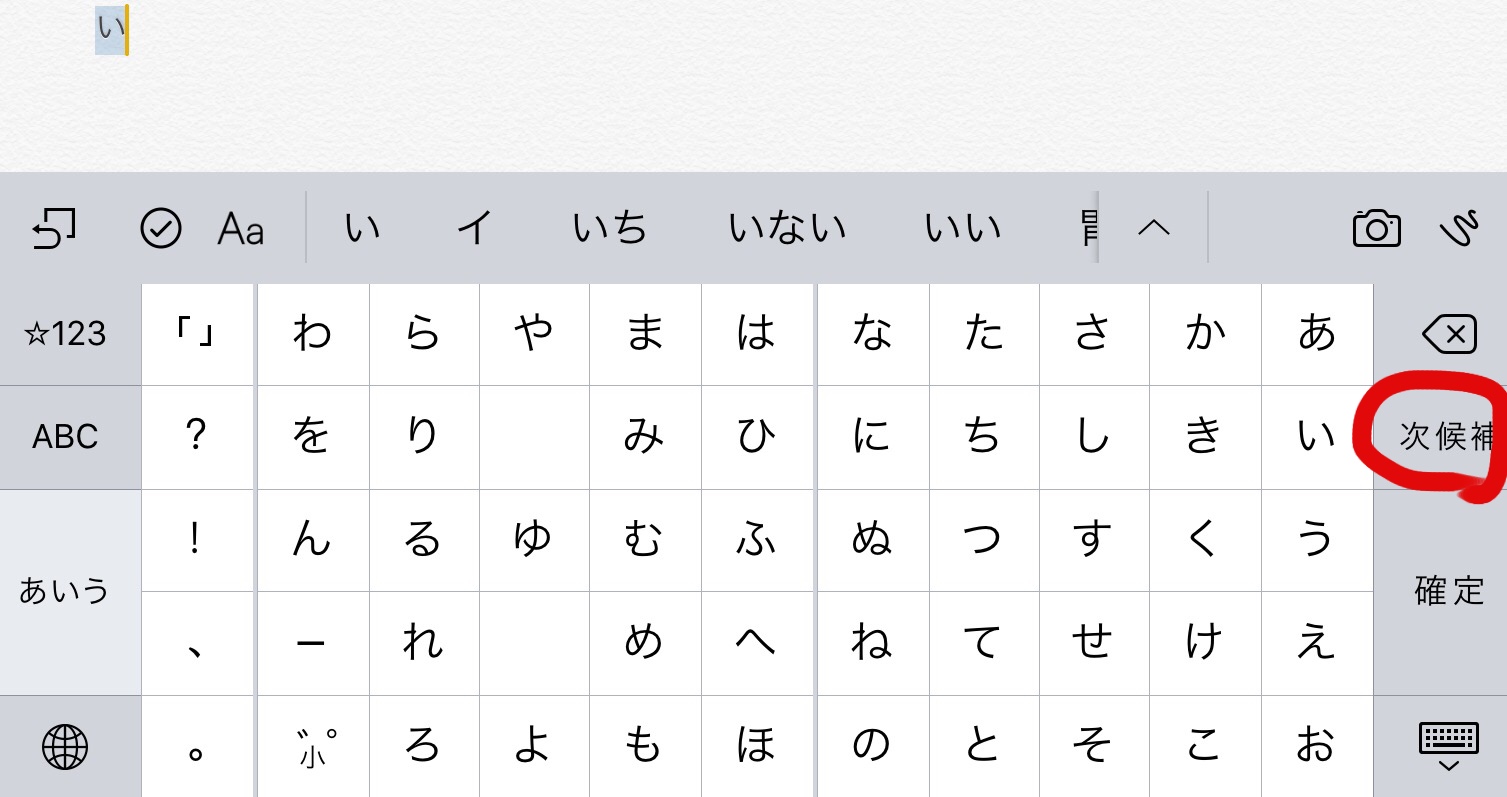 The key below appears to function as a Return key.

What is the significance of these keys?

Update: With the help from the contributors below, I think I've worked out the hirigana → katakana mapping on the iPad kana keyboard now:

I originally included this in a reply below, but thought it might be helpful to make it more visible here. If anyone spots a mistake, please let me know so I can correct it.

Think of the keyboard like a grid, laid out by syllable. The vowels are on the far right column. The rows represent the syllables formed by pairing consonants with those vowels. So, going from right to left across the row beginning with あ, you have the characters for "ka," "sa," ta," etc. This is also why ゆ has those blank spaces: "y" is only ever combined with "a" (や), "u" (ゆ), and "o" ("よ"). yi and ye are archaic sounds no longer used in the language.

The keyboard DOES have a space character: 空白, which literally means "blank space." That said, Japanese doesn't use white space the way that other languages do.

。 is the full-stop, though you'll sometimes see use of . as well.

The extended keyboard provides common alternative characters for what you've typed, usually in the form of kanji and katakana. It also provides suggestions for words you might be trying to type, to make it easier. That's also why the characters are highlighted -- the highlighting represents an "in-progress" word that might still need to be converted to a different form, or changed because of a typo.

確定 actually means "decision" and you use it to tell the keyboard "I'm done with this in-progress word." Some keyboards also have the setting to auto-correct some words to their common kanji readings when you press it.

I will clearly need a much better understanding before I will be able to make much use of all the details you've given, but that's very helpful, thank you.

Full-width and half-width appears to refer to two-byte or single-byte encoding? I'm not quite sure how that would function/apply on a Unicode-only device.

Unicode uses two bytes for all encoding, but in the days of ASCII and EBCDIC a single byte was used for Latin character sets, with two bytes being used to encode Chinese, Korean, Japanese, etc characters using different code tables.

Half-width kana used to be a necessity, but these days they're used more for style. Here's a bit of history/info, if you're interested: https://en.wikipedia.org/wiki/Half-width_kana

ETA: Also thank you for the Lingot! Glad I could help.

I respectfully disagree with @duonks - I think it is worth your time to familiarize yourself with the kana keyboard. For one thing, it will make typing your own flashcards so much easier!

There is a mnemonic for remembering the order of the consonants for each column, going from right to left:

Ah Kana Signs Take Note How Many You Read Well

That, together with remembering vowel order (A I U E O) will help you find any given syllable.

I don't personally think (at this point) there is much point to the Romaji keyboard on an iPad. I think it would just be more confusing/limiting. On a Western PC keyboard, perhaps.

So the vowel order is also different in Japanese?

Yes, unfortunately (frowny face). Once I figured this out, I was finally able to use the word index in the back of my textbook.

I respectfully agree with you :-)
I wish now I'd spent the time to decipher the proper keyboard!

I always just click the globe in the lower left hand side and change it to an English keyboard that responds to romaji. Wait, it's been a while. Hrm... I'm pretty sure it was the globe.

If you.re having too many problems maybe it.s better to use the

I never really found out how to use that keyboard, and I ended up spending way too much time looking for characters that sometimes weren't even there! In the end I mainly relied on the "Japanese - Romaji" keyboard... Phonetic, much easier for me to use :-)

Thanks to everyone who has given very helpful information above. For the benefit of other complete beginners, like myself; these may possibly help in deciphering the iPad Japanese Kana keyboard:

For any of those, who, like me, wondered what the earth was going on when it began asking to translate from hiragana to katagana and vice versa (without explanation), perhaps this may help:

Of course, it would help if it were possible to get directly to the Japanese discussions without being forced to change to an arbitrary different learning language!

OK, I think I've worked out the hirigana → katakana mapping on the iPad kana keyboard now:

If anyone spots a mistake, please let me know so I can correct it.

Does anyone know what this key does, or is used for?

Edit: I've gone through more in depth in This Post

That is exactly what it does. They apply to the following hiragana. ^_^

One tic and I'll go find a chart for the kana that you'll use it to shrink.

I'm pretty sure the only kana you'll want to miniature at times are ya や, yu ゆ, yo よ, and つ. It has to do with mora (timing).

Take the words byouin (hospital) and biyouin (beauty parlor). These words are very similar to each other. However, Japanese has no stand alone B sound. And, also these words are pronounced slightly different. To note these nuances, they are represented as byouinびょういん and biyouinびよういん when written out with kana.

What is the difference in pronunciation? BI/YO/O/I /N. (Each of these sections take up one beat or length of sound. For a total of 5 beats of sound.

In contrast, beauty parlor takes up only 4 beats of sound: Byo/O/I/N.

Note on pronunciation, whenever you see O followed by U or おう, it means to draw out the O sound for an extra beat of time, instead of making the U sound.

I hope this helps and isn't too confusing!

Actually, I think I will expand on my comment above and make it into an entire discussion. That way it won't get lost and more people can see it. :)

That's really interesting, thanks. Is this a feature from normal/physical keyboards?

Sorry, I meant the key. I guess I was intending to mean the function that the key provides.

I just dug my ipad out of a closet and cleared the cobwebs off. Unfortunately, the battery is too dead for me to turn it on until it charges a bit. :P

The globe lets me switch between all languages I've activated on my ipad.

I usually use desktop though with either Win7 or Win10. For those, once I've installed a new language, I have to click in a place that allows typing. Then, I press Shift and Alt at the same time to change the language script my keyboard will produce.

I haven't changed my keyboard for my Android phone to Japanese yet. At the moment, I just hold down a key, and various diacritical options happen for letters that use the Roman (Latin?) script.

Have I managed to answer your question? If not, let me know and add some clarifying comments and I'll try to hone in on an answer. :)

I think we are perhaps at cross-purposes. It doesn't matter, you fully answered my original question. I was just curious if the diacritic key existed on normal/physical Japanese keyboards or whether this was just found on iOS/Android devices?

It doesn't really matter. I was just curious, because it seems largely superflous (perhaps) on an iPad keyboard since the same functionality can be achieved (possibly more simply) by the tap-and-hold or flick method.

This topic makes me feel better about my own reaction to the keyboard lol!

I've only used it once so far and I just gave up and used the speech recognition ;D

Wi have just started and am totally puzzled by the ipad keyboard. How do i go from he to ge into ogenki te into de desuka. This is just one of the problems i encounter so never can go past the problem sentence nor finish the lesson... Thanks for any assistance

Does anyone know where to find the Yōon characters (specifically for katakana) in the Apple keyboard? There is no information available online. I’m trying to spell the name “John,” but keep getting an error because I cannot create a small ヨ (or any of the others, for that matter).

But you can create a small ょ by tapping on the よ for slightly longer and then sliding towards the ょ that has popped up above, right? When you do that, you'll notice that ョ is displayed on the line above the keyboard. That line also offers you ジョン even though you have typed じょん.

It did not. I found a solution, though, which is to tap the “° button in the lower left after I choose any やゆよ or つ character. It will make it smaller. But the rest works - with katakana options appearing in the grey section above the keyboard.

Wait - are you not on an iPad? Because what you describe is something I have to do on my iPhone, and it is slightly more cumbersome because you have to press two keys.

Since this thread has "iPad" in the title, I assumed that was the Apple keyboard you were referring to.

Ahhh! Sorry. Yes, it’s on an iPhone. I could not find any resources, and this was the closest one.