Pronunciation of "plus" in French

I have been struggling with the pronunciation of "plus" in French because sometimes the "s" is pronounced and sometimes not. After doing a bit of research this morning, I found that there is a simple pronunciation rule. I wanted to pass it along to those of you who are also studying French in hopes it will also help you.

Plus is pronounced with the "s" when it has a positive meaning such as more, extra or additional. Example: Je veux plus de vin - I want more wine.

Plus is pronounced without the "s" when it has a negative meaning such as "no more". Example: Je ne veux plus de vin - I don't want anymore wine.

Here is the link where I found the information: https://www.thoughtco.com/how-to-pronounce-plus-french-adverb-4084872

You are right, it's not very complicated. It took me 2 months to even know this rule exists, but after watching this video, I understood fine. https://www.youtube.com/watch?v=Uv7nTsxUy30

Thanks for posting this. I like this video series but had forgotten about them.

Thanks for the info! This will really get rid of my confusion when I come across pronunciation.

A quick summary from frenchmoments.eu : 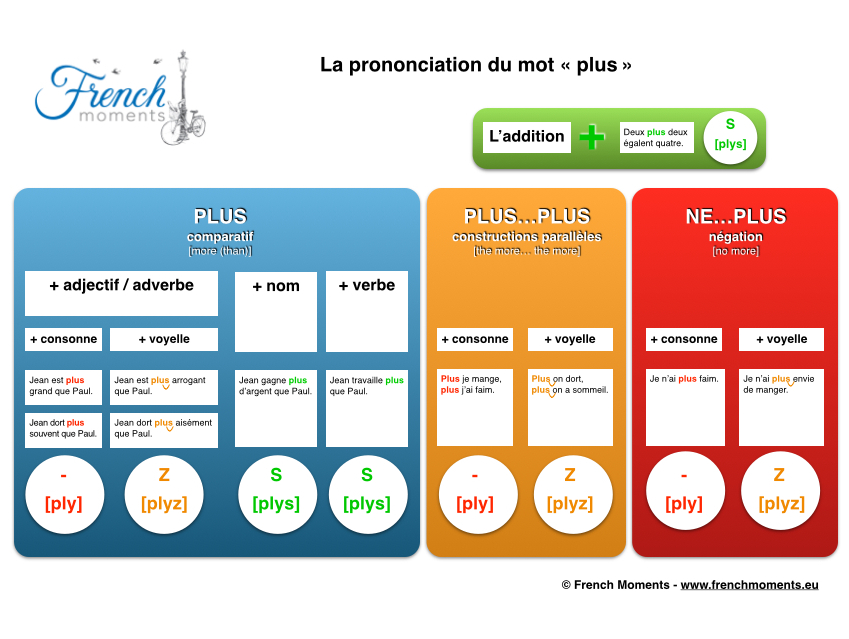 Thanks for posting this. This is more detailed information than I found.

I also get confused with this word , thanks man for help

Cheers! Had been wondering what was up with that.