"In England, they do not eat soup; they drink it."

39 Comments
This discussion is locked.

During one's French education, it's important that one learn to use such classy gallic mistruths in order to sneer at les Anglais.

Actually, this sentence is here to try and stem the flows of complaints on sentence discussion threads for "les enfants mangent de la soupe" and the like...

The sentence is about "soup in general", not "an unknown amount of a mass thing". So you need the definite article "la" used for generalities.

"they" here is being used to vaguely to refer to people in a general sense, some unspecified people that are representative of the populace as a whole. Grammarians sometimes refer to this as the "fifth person". As another example, if I were to say "In Italy, you can get pizza from a vending machine" (which you can, by the way), am I saying specifically you can get such a pizza, excluding everyone else? Or do I mean more generally that "pizza from vending machines is available for purchase in Italy"?

In English we can use pronouns in this weird, vaguely general way - in fact, I've done so multiple times already in this post. ("Which you can, by the way", "In English we can use...") But we also have a much less common pronoun reserved specifically for this purpose: "one", as in "In England, one does not eat soup" or "In Italy, one can get pizza from a vending machine". This is the way the French do it: if you want to refer to vague, generic people, you use the vague, generic pronoun: on.

Yes, that part is clear, but how to determine which conjugation to use, such as boivent? Here they have conjugated for il/elle, correct. Yet to me, on should refer to we or they. sorry, very confused here...

I'm afraid you'll have to learn conjugations as they come.

When using the pronoun "on" it always conjugates as the 3rd person singular i.e. the same as il/elle

Why is "on" being asked as translation of "they"?

See Arcaeca's brilliant explanation above. If that somehow doesn't satisfy you, then have a read of this: https://www.frenchtoday.com/blog/french-grammar/understanding-french-on-subject-pronoun

Why is it that on google translate it translates as this: 'En Angleterre, ils ne mangent pas de soupe; ils le boivent.' Yet it is deemed as incorrect?

You may want to use Google Translate for single words, but please don't if you need translations of phrases or sentences.

"Le" is absolutely impossible here, since it would represent "soupe", but "soupe" is feminine.

Why is "potage" not an acceptable translation of the English "soup"?

In case you are curious about the historical differences between "soupe" and "potage," here you go!"

Soupe is the older term and dates to the Middle Ages. It refers to the meats, vegetables and gravy broth that were served on une tranche de pain (French) or on a trencher (English).

Toward the end of the Middle ages, the rising bourgeois considered the dish too "rustic" and in lieu of soupes, potages, typically made from vegetables, were cooked down in a pot until the consistency was smooth. This was served either hot or cold in a bowl rather than on bread.

Today the line between what is considered a potage and what is considered a soupe is a bit murky in French, generally something made from a meat broth with chunks of things in it is a "soupe" and a smooth blended dish from a water base usually made of vegetables is a potage...but from what I have seen in French grocery stores that isn't necessarily the case. The words do seem to be used interchangeably.

This may be similar to the use of stew or soup in English- the terms are a bit subjective. However, I'll leave it up to a native speaker to make the call as far as potage/soupe.

The generic and category name is still "une/de la soupe". There is an endless list of possible recipes and ingredients, but nowadays, there is no meat in soup. Yet, you can have pasta, rice, chunks of vegetables, etc. so that you may have to use your teeth to eat it. In any event, it is rather thick and nourishing. This is why young children are soup fed.

"Un potage" has kept its somewhat posh connotation but it still refers to clear soup, that is so liquid you can drink it, with all ingredients processed with an electric mixer/blender. You should see your spoon through it.

To make "une soupe" become "un potage", you only have to mix the soup longer and add water or milk.

Now I'm curious... is there any dish that is "soup-like" but contains meat in French cuisine? In English, the generic term is "soup" but under that umbrella we have our stews, chowders, gumbos, broths, cream soups, purees, bisques, (oh yes we borrow shamelessly from French), etc.

Please take a look at these: http://lesotlylaisse.over-blog.com/article-la-classification-des-potages-et-soupes-115039375.html 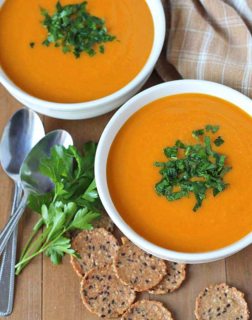 Why on and not ils? If you're talking from the perspective of an England outsider, you'd have to ils not on right?

The original, French sentence has "on", which can translate to "one" or "they" and even to "we".

The other way around, with "they" in the English sentence, the French translation has "ils" or "on", depending on the perspective you mention.

Am I mistaken, or did that change from third person? How does that work ? Anyone, anyone at all?

I don't know why my answer is wrong, it is identical to the one you give!

Why is it not "on ne mange pas DE la soupe"? Thanks