Translation:Thank you, and have a nice weekend.

29 Comments
This discussion is locked.

Does the word Víkend come directly from English?

Yes, we just write it phonetically.

See, I translated this as " thanks have a nice weekend" and the answer is saying that its " thanks and a nice weekend." So I guess the direct translation is what it wants?

You are missing "and" for the Czech "a". "Thanks and have a nice weekend." is accepted.

Is the word víkend common in Czech?

I missed a comma and marked incorrect

There is no comma in the main translation, so your answer would not have been rejected because you didn't include one. There must have been something else in your translation that was incorrect.

Please use the Report button for "My answer should have been accepted" when you believe a rejected answer was correct. That allows us to see what you actually wrote.

Thank you for telling me about the report function but your reply is a little condescending. I typed the correct answer and it was rejected because of the comma. I know it was correct because the same question came up 2 questions later and adding the comma made it correct. I'll use the report function, for when what I've actually wrote is correct bar punctuation not in the text to be translated.

Thank you for your comment. Reading it made me realize that my reference to there being no comma in the main translation was incorrect; I had inadvertently looked at the Czech original, where there is no comma.

So, to see what might have been going on, I just tested "Thank you and have a nice weekend" -- with no comma. It tests "green," which indicates that it should have been accepted.

I cannot tell you why it may have been rejected for you, or why your answer was accepted later, when you added the comma. But I can tell you that Duo's error-correction and reporting systems have lately become less reliable than they used to be. This makes our job of supporting learners more difficult.

Duolingo normally removes all punctuation before it checks the answer. All punctuation is thus ignored. Please double-check again if your claim is correct and if yes make screenshots. 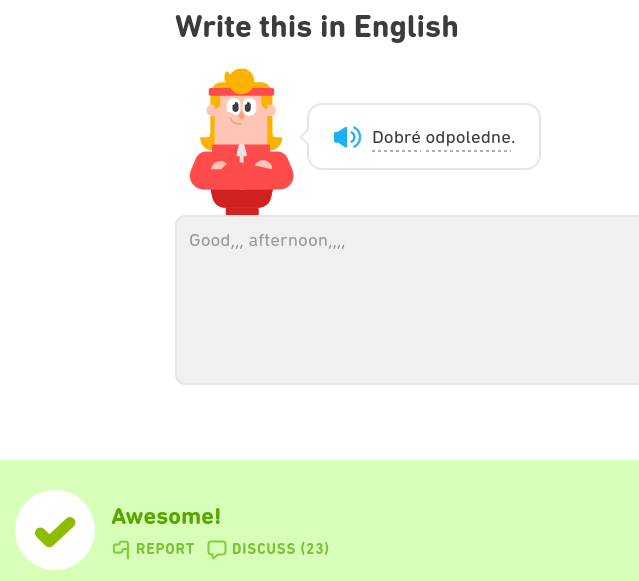 I tried "good weekend". But it didn't work. Now I know.

This time it accepted "good weekend." Guess I didn't learn the first time.

But, which is correct?

You should report the complete sentence. "good weekend" is accepted.

I (native AmE) would say that "Have a nice weekend" and "Have a good weekend" are probably used with about the same frequency, at least in the US, and both are accepted.

So do Czech people really says just "hezky víkend" and "have" is implied or you need to say Czech word equivalent for "have"?

The having is implied and actually including it is an ugly anglicism. There is no explicit having in Dobré ráno, Dobrý den, Dobrý večer and Dobrou noc either.

Yes, you can, but it is something extra, not the default form. Therefore, I would not accept it here (přeji = I wish you).

Why "have a beautiful weekend" isn't acceptable? "Hezky" is beautiful as well

"Beautiful" is krásný. And, just as in English, it is a stronger word than "nice" or "pretty." The course routinely makes this distinction.

One might observe, however, that -- as a practical matter -- the distinction is probably less significant in a sentence like this than it is in other exercises, and I can easily imagine "Have a beautiful weekend" being used in exactly the same way as "Have a nice weekend," though possibly less often.

The potential downside of accepting "beautiful" in this exercise, though, might be confusion among learners as to the distinction between the two adjectives, a distinction that is otherwise made pretty clear throughout the course.

i wrote "thanks and have a nice weekend" but it's marked as wrong answer. why is that?

According to a comment by VladaFu from a few years ago, "Thanks and have a good weekend" is among the accepted translations. So either that has changed, or there was something other than "thanks" that Duo didn't like. If you used the Report button someone can check your answer in the system and tell you why it was rejected.