Learning Japanese is quite challenging, but Duolingo is here to help! First and foremost, let’s start with Hiragana, one of three Japanese writing systems. This chart starts from upper right hand side corner, and goes down from top to bottom.

These are the vowels, and pronounce as short vowel sounds. This is easy to say but very hard to do for English speakers. When you see those vowel letters, it’s natural for you to pronounce as long sounds as English letters, a e i o u. This would be one of the best advice to keep in mind as you read Japanese in Romanized letters (Romaji). Reading those vowels with short sounds will definitely help you pronounce the rest of the Hiragana.

This is the top row of the Hiragana chart from left to right with the irregular words added at the end. As you can see, the vowel “a” (あ) is combined with a consonant “k” to make the word “ka” (か). So, the rest of the chart will be the same: a consonant followed by a vowel. This is the way the Japanese students learn hiragana by memorizing the top row. Thereafter you would go into “ka” (か) column, and follow “ka, ki, ku, ke, ko” (かきくけこ), the next is “sa” (さ) column, “ta” (た) column, and so on. Once you learn the vowels, the rest is quite systematic. “Wa, wo, n” (わをん) are the irregular words. Also, the “ya” column only has three, “ya, yu, yo” (やゆよ).

In Japan, scripts can be written horizontally or vertically. Hiragana chart is usually written in the vertical writing (top-bottom) in the same way as in school textbooks for Language Arts and newspapers. Most literatures are also published in vertical format. However, more and more books are written in horizontal writing (left-right) as you see in digital world. Manga frames still tend to flow in right-to-left horizontal direction just as in the hiragana chart. 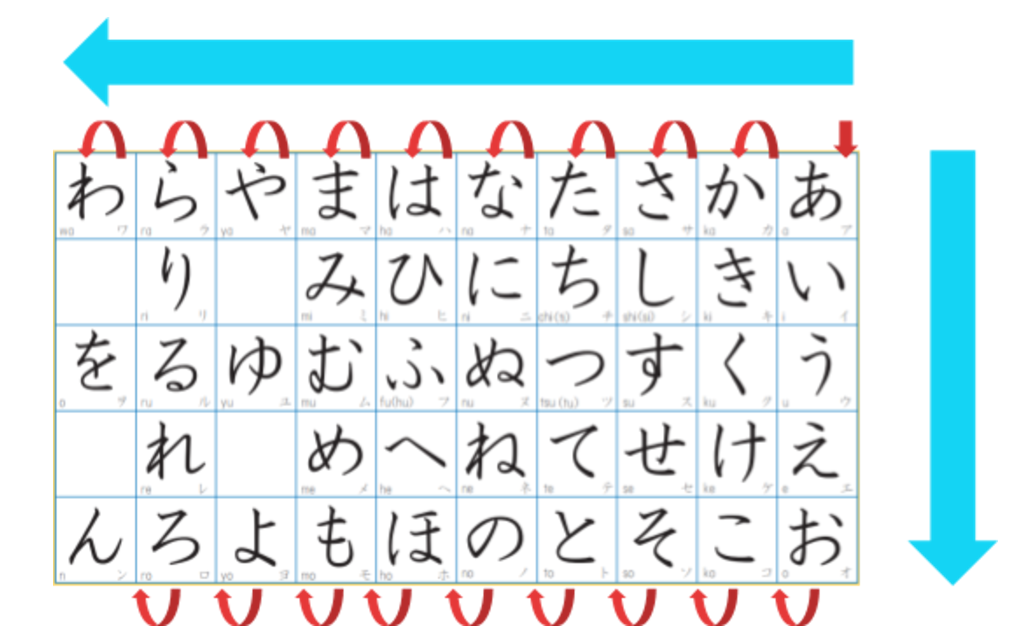 ポケモン (ぽけもん)
Now that you learned the trick to pronounce Japanese words, you know it's "Sake" (酒／さけ) not "Saki", and "Karaoke" (カラオケ／からおけ) not "Karaoki". Knowing this, you'll also be able to avoid the common mistake of saying "Poke-EE-mon"!

For those who know kana (both hiragana and katakana), there should be the option to not see romaji, and allow for not having to relearn kana when you know it. Waste of time. Also, allowing people to type out their own Japanese sentences instead of picking out from the bubble options, and speech practise. Those add-ons in your Japanese settings would help a lot. Also, to write out the kanji/kana on the screen to test their stroke orders. THANKS!

Thank you for your suggestions! I will let them know.

I agree, there should be ones with just audio, with the multiple choice of the hiragana and katakana, instead of seeing the english sounds, it would help me a lot.

i think the on screen writing might be unlikely to happen just because that would take a lot of programming and integration from scratch :/

However, I am a big fan of your suggestion for opting out of romaji and learning kana. They should have a skills test for kana in the beginning and if you pass, you just skip to the initial vocab they would have integrated with the kana lessons.

i just draw them myself in MS paint

I only started three days ago . Not knowing any kana . And would agree about the romanji its kind of off putting and being able to write out would be great.

I agree. I just started and downloaded a separate app for learning to write. Also, it would be good to have a section for learning the katakana. The intro to hiragana was great for me. But, not having the same for katakana is a drawback.

So far the app is good.

I wonder why this is not directly below the very first lesson. It would be so useful if it were, with sound files when you click on each character.

So I started with the first lesson of Hirigana the other night and thought to myself "I feel like there should be an introduction because they're just throwing things at me and it's confusing and a little demoralizing." Up til today I felt that way, and I just finished the first module of "intro" so....a little ways in... and I just found this page and can't say how VALUABLE this is. It just felt like total unorganized jargon to me but now I can see the chart and know that consonants and vowels are deliberately aligned and suddenly it all makes sense. THANK YOU but this should really be like the first thing you see when you click on Japanese. Just... here's the introduction. Now onto your first actual lesson.

Tinycards link is added for your practice!

I just started Hiragana 2. I've seen some letters pronounced differently from their English consonants in the Hiragana 1 & 2. So far, I've "ha" sounded as "wa"; "ro" sounded as "do", and "ru" sounded as "u" (almost like a grunt). Any reason for that?

As for the R-column... you can NOT think of these R sounds like typical hard R sounds (Rah, Ree, Rue, Reh, Roh) you see in English. This would be a complete mistake.

Their "R" sounds are more like they are in the middle of R, L, AND D sounds, though mostly between R and L. Usually in English when we make R sounds the back of our tongue is raised to the middle to back of the roof of our mouths to get these hard sounds... JAPANESE on the other hand don't do this. They put the tip of their tongue to the back of their teeth in the front of their mouth with a flicking motion and make softer R sounds; the way that English (or other languages) would make distinctive L or D sounds.

The best exercise for this is to start by making L or D sounds with the tip of your tongue to the back of your teeth, even alternating/combining. Then, without changing mouth position too much, try to make R sounds. It should come to a decent middle/balanced place where you can't really tell if you're doing L or R or even a D sound.

Here are also some video links (These are kinda old so the quality isn't great but it's basically all I've said with practical explanations as well.)

I was a little irked when I encountered that myself. I feel like it's a little misleading, because Japanese does still include the "ha" sound, and they just gloss over that and it possibly teaches people to always sound out "wa" whenever they would see that.

"The Hiragana は (ha) is pronounced "wa" WHEN it immediately follows the topic of the sentence. This character is usually only pronounced "ha" when it is part of a word."