A strange linguistic phenomenon with the word "moat"

Let me share something I noticed while living in Quebec. I'd love to hear your comments. I first thought about posting this in the French forum but, after reflection, now think that it is potentially of broader and more general interest.

If you ask any native speaker of English, "What's the word for that ditch around castles, that could be filled with water?", you will quickly hear the answer, "Moat" (typically accompanied by a strange look wondering why you would ask such a random question).

I have found that if you ask the same question, in French, to an educated and articulate native speaker of French, "C'est quoi le mot pour le fossé autour d'un château, qui peut être rempli d'eau?", the answer is very often that he or she doesn't know . Although French has a perfectly good word for "moat" ("douves"), for some reason, it is just not a word that forms part of the linguistic repetoire of the average French speaker without special training in mediaeval architecture.

I have often wondered, and would love to hear your thoughts, on: (a) why this may be the case, (b) if there any good examples in reverse (ie, an obscure, technical word that is common knowledge to native speakers of French (or Spanish, or German, or any other language) but not to native speakers of English; and (c) what about the word for "moat" in other languges/cultures?

This is crazy interesting! My spouse is a native French speaker from Quebec who now lives in western Canada and speaks English fluently as a second language. I just posed your question and after a bit of thought got a blank look along with the response "I don't know." When I said the word "douves" there was still no recognition.

:-) Tell me this, does your spouse know the word "moat" in English?

He had not heard the word moat until today. He would use the word ditch in English or fossé in French. When I pressed him about it, I got some remark about it not being something someone would know unless they had studied medieavel architecture.

I am assuming that you are a native speaker of English, and replied that you have known the word "moat" since the time you could walk.

I am now hoping I haven't accidentally provoked a marital spat. :-)

For some reason, "fossé" is pretty similar to the portuguese word for "moat", "fosso".

Does "fosso" (which is presumably cognate with French "fossé") mean specifically "moat" in Portuguese, or does it also potentially mean "ditch" in a more general sense?

In portuguese "fosso" is specifically "Moat", as you can see on Wikipedia. For "ditch", the correct translation is "vala".

This is getting more and more interesting. In Spanish, it seems the word "foso" can mean both "ditch" and "moat". (http://dle.rae.es/?id=IIzaiYC); Portuguese, you say, uses "fosso" just to mean "moat" and a completely different word for "ditch".

I am thinking there is quite a bit of history behind this word.

Australian English native speaker here – I think the only reason I know the word "moat" is from building sandcastles as a young child. Had I not done this, I'm not sure if I'd still know the word – does anybody know if the word for a channel around the sandcastle has a different name to that around a stone castle in French/if sandcastle building with moats isn't a tradition in France and/or Quebec?

In Dutch it is called a slotgracht that is a castle canal.
The Muiderslot is an example of a Dutch medieval castle with a slotgracht. 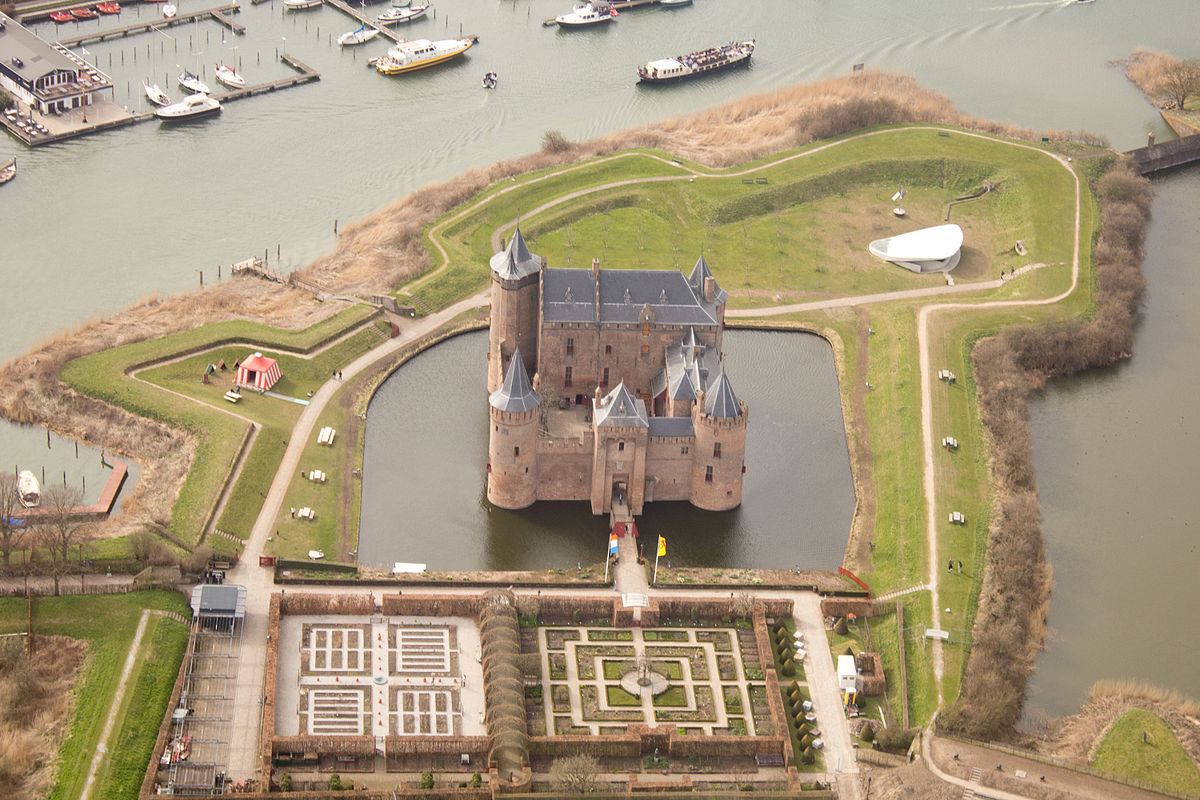 EDITEDIT: My Chilean friend didn't know the word, and had to look it up. She theorises that it might be because there are so many castles in England (well, mostly in Wales). That does strike me as likely. Americans, Australians, etc probably also have no idea what a moat is.

EDITEDITEDIT: My girlfriend had no idea, and didn't recognise the word

I hope will add in their answers for a, b, and c, but I will just add that the Google NGrams comparisons of "ditch" to "moat" and "fossé" to "douve" seem to comport fully with expectation formed by your observation: fossé is a 55:1 favorite over douve, while ditch is only about 4 times more common than moat. Personally, I don't think I'd ever normally apply the word "ditch" to an area of highly-localized low relief with a substantial amount of water present. Ditches are for water to pass through sometimes. "Fossé" must just be a bit broader, so perhaps French didn't need a more specific word in common use because a broader one fit more naturally.

I would hazard a guess that there's a few terms in e.g. traditional cathedral architecture better known to speakers of other Western European languages than to at least North American English speakers. I bet "parvis" — the courtyard in front of a cathedral — fits the bill in French, a word anyone visiting Notre Dame might well come across but that I don't think I've even known also exists in English until this very moment.

Not exactly fitting with your specific questions, but I've had a lot better luck acting out what "esquí de fondo" (cross-country skiing) is than trying to use the Spanish name of my favorite winter sport. I doubt "cross-country skiing" has perfect name recognition in the American South, Southwest, or California, but I'd think it's better. But this and uncountable other culturally-related terms fit the expected pattern: more familiar where the things they refer to are more common. "Moat" really is remarkable in that, as a non-UK person at least, it's more commonly used where the referent is well nigh non-existent (assuming what holds for Quebec holds for European French speakers). It is a fascinating observation you made!

Thanks for this; I had never heard the word "parvis" and agree that it is a good prospect. I will investigate the matter further! :-)

I recently experienced a similar realization(edit) within English, within the US. I grew up using the word "pitch" and "sap" interchangeably. I was never aware "pitch" was not widely used like this among English speakers.

When I visited Duolingo headquarters June of this year, we got together and played a game called Code Name. I had two tiles: cook and pitch. I had to use a single word to get people to guess both of those tiles. So, I said "syrup". To my surprise, they were unable to sort out my clue. I was shocked. Here I was in a group of language professionals and "syrup" did not link "cook" and "pitch" for them. After the game, they asked me what tiles I was trying to indicate. So, I told them. And they continued to look confused. So, I said "pitch" you know, like "sap". It wasn't a light bulb moment. Instead, they asked "pitch" and "sap?" The two words were not synonyms for the other people in the group.

I have since learned that using these two words as synonyms is hardly makes it beyond the border of Oregon (that i'm aware). The people most likely to connect the two outside of Oregon are people who are familiar with boat craft, or whose lexicon's have bumped into that of boat craft people somewhere along the chain of communication, spreading haphazardly like a very weak contagion.

Definitely no expert in this, but it appears in general these are two different plant substances, obtained / extracted by different processes (I have long known the word "pitch" used along these lines of sealing boats, and maybe even log cabins, but certainly didn't know what it actually was.)

For instance the Wikipedia article for "pitch" is titled "Pitch (resin)" while the 2nd sentence of the article on sap is, "Sap is not to be confused with latex, resin or cell sap; it is a separate substance, separately produced, and with different components and functions."

Of course Oregonians are more than free to use words as they are accustomed. I remember moving to the South as a child and my whole family being shocked and confused that there "toboggan" was a hat! And the people had no familiarity with the type of sled that was the only thing we associated with this word.

The Swedish word for moat is "Vallgrav" and is as common knowledge among Swedes as moat is among English speakers. Which would be odd if one went by some of the suggested explanations in this thread. There are far fewer castles in Sweden, although there are certainly some, and next to no medieval movies are produced in Swedish. One might argue that a direct translation is more suitable for subtitles, which is preferred over dubbing here, but that doesn't strike me as a convincing enough reply.

So I got to wondering. I don't know too many castle architecture terms, but I do know "portcullis." Seemingly the French translation is "herse." NGrams has "herse" being 2.5 times more common than "douve." Meanwhile "moat" is 20 times more common than "portcullis." I think any native English speaker would expect this; "portcullis" is not a word I think we would generally expect to be universally known; it's also not used in a metaphorical way that I'm aware of, unlike "moat." I'm wondering if metaphorical usage might account for some of the word's commonality.

Because I played Stronghold: Crusader as a kid.

(If found please redirect to /r/bonehurtingjuice)

That is very odd, especially as my dictionary gives its origin as Old French. However the OF word was mott and that changed its meaning to our current understanding of moat in the Norman language which could account for its English usage following the Norman invasion of England.

As for the word "douve", my French girlfriend once explained that it refers more specifically to moats around the Renaissance (and later) chateaux along the Loire, which are more akin to manors and palaces. The moat around a "chateau fort" (medieval castle for defensive purposes) is, according to her, simply called "fossé". Considering that the vast majority of European and Canadian French speakers is more likely to have visited (or seen in a movie) a chateau fort than a chateau de la Loire, this would explain why the word "douve" is so much more obscure.

Now to other examples: In my native German, most animals' names (domestic as well as exotic) are easy-to-grasp descriptions using mostly Germanic roots, whereas in French the same animals have names of Latin or even Greek origin that cannot be deduced if you are not familiar with the species.